1870s Guardbox Heads To The Shop 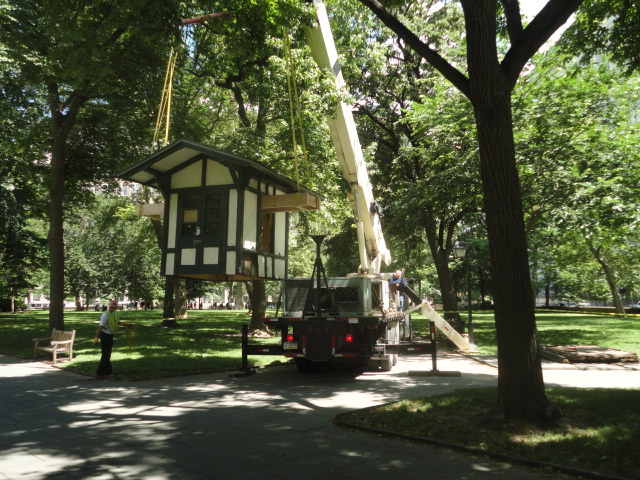 A squat wooden hut is not the first landmark that visitors to Washington Square will likely notice. Yet this very Victorian structure was the attention-getter Wednesday morning as a crane lifted it from its crumbling foundations and onto the platform of a moving truck, as if an act of farewell.

“Don’t worry,” Susan Edens, cultural landscape architect for Independence National Historical Park, told me as we witnessed the removal. “They were meant to be moved around.” 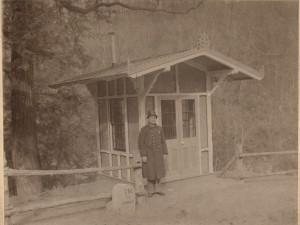 The hut in question is one of Philadelphia’s last surviving guardboxes–originally used as patrol posts by the Fairmount Park Guard for over a century–and in this case, the move is only temporary. According to Edens, the guardbox, which dates from the 1870s, will undergo a two-month restoration before returning to the park.

Of the more than one hundred guardboxes that once graced the Fairmount Park system, only a handful remain. Most of those that survive, like this one situated at the southeast corner of Washington Square, have been in dire need of repair.

The project is being coordinated in agreement between Independence NHP, which has managed Washington Square since 2005, and the Fairmount Park Historic Preservation Trust, which is currently overseeing the restoration of another guardbox that stood along Lincoln Drive. 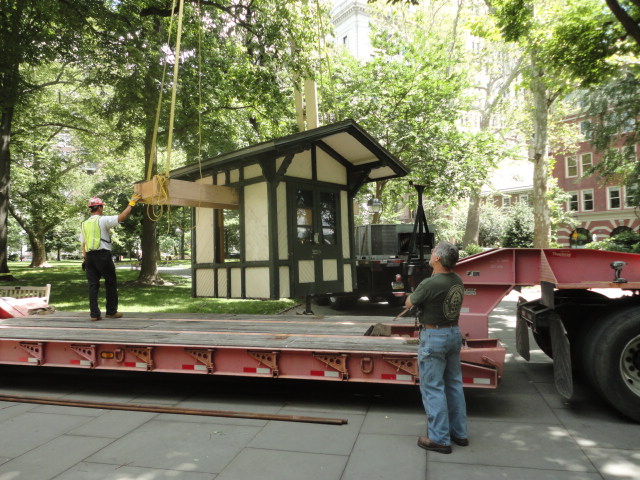 The $20,000 in funding for the restoration was provided by an anonymous donor to the Society Hill Civic Association, who then contacted the National Park Service, according to Jane Cowley, the Public Affairs Officer for Independence Park. The funds will go towards restoring the flooring, skirtboard, framework and windows, as well as a brand new foundation. The NPS itself is covering the costs associated with the transportation of the guardbox to and from the Fairmount Trust’s conservation studios in West Mount Airy. 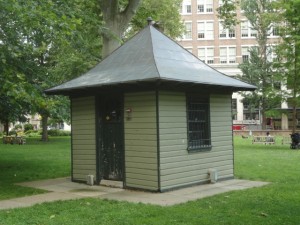 Once this hut returns, it’s a safe bet that it won’t need to move again for a while. In the meantime, visitors can find a second guardbox quietly keeping watch over the northwestern quadrant of the square, as it has with continual upkeep–and minimal hoisting–since the early 1900s.