Barnes Prequel On The Parkway: The Unbuilt Temple Of Music 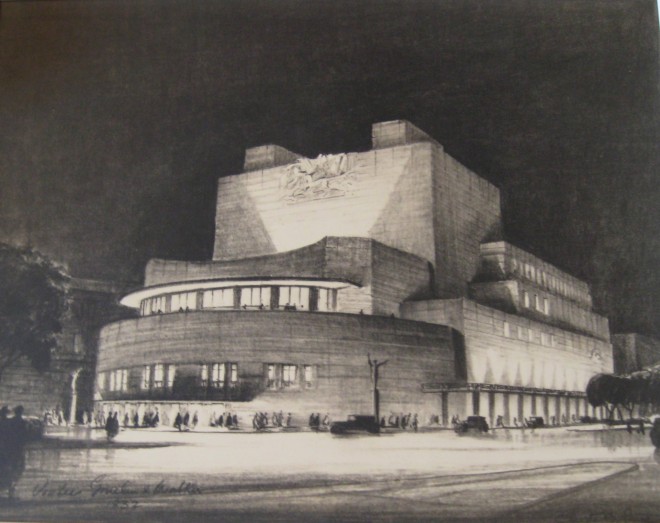 “Temple of Music,” 1932 artist’s rendering. Courtesy of Athenaeum of Philadelphia

With a booming economy about to go into free fall, a monumental new building on the Benjamin Franklin Parkway is proposed for an important Philadelphia cultural institution, requiring a contentious move from the institution’s beloved long time home. The high profile project has the support of many, though not all, of Philadelphia’s cultural and civic leaders.

A civic debate ensues, but it appears the proponents of the move will win the day; officials begin to work with a top New York architect, imagining an elegantly massed work of Modernism connected to an enticing garden.

2010? No, it’s 1930, and the institution isn’t the Barnes Foundation, it’s the Philadelphia Orchestra, which has plans for a “Temple of Music” to be built on the Parkway. But unlike the Barnes, the project never advances beyond the drafting table.

Plans for the Temple of Music began to shape in the late 1920s when some of the city’s music and civic leaders perceived the need for a new home for the Philadelphia Orchestra. Among them was Albert Barnes’ close friend (and co-Modernist) Leopold Stokowski, the Orchestra’s brilliant, innovative conductor who since his arrival in 1912 had built the Orchestra into a world-renowned ensemble. Stokowski and others felt that the Orchestra’s current home, the venerable Academy of Music, then over 70 years old, was an outmoded, ill-equipped facility for such a world-class institution. They envisioned a modern venue with state of the art facilities, situated on the Parkway, the recently completed grand boulevard that was emerging as Philadelphia’s main cultural thoroughfare. 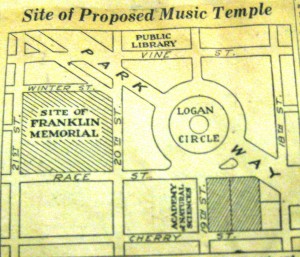 In 1930, Cyrus Curtis, founder of the Curtis Publishing Company, paid $2 million for a lot at 19th Street and the Parkway, facing Logan Circle, for the new building (the present location of the Four Seasons Hotel). In September of that year a new non-profit corporation, the Philadelphia Arts Association, was formed to raise the money to build and manage it. The Association included some of Philadelphia’s richest and most influential citizens. After considering proposals from architects nationwide, in January 1931 the Association’s architectural committee chose New York Architect Ralph T. Walker to design the new “Temple of Music.”

Stokowski, who was actively involved in the planning but was not on the committee, wrote in February 1931 to committee member Cyrus Bok, his good friend and benefactor, “I will with pleasure see Ralph T. Walker in New York next week.” Stokowski also noted that “I was astonished not to see on the list of architects compiled by the Committee the name of Frank Lloyd Wright.” Nevertheless, Stokowski worked with Ralph Walker on the new building’s design and was one of its most vocal proponents. On April 24, 1931, following the Philadelphia Orchestra’s final concert of the season, he spoke enthusiastically from the stage of plans for the new venue. This drew a public rebuke from longtime Orchestra supporter and board member Frances Wister, who chided Stokowski for speaking out of turn. She insisted that no decision had been made regarding a move and that there was nothing wrong with the Academy of Music.

While opinion remained divided, planning continued for the Temple of Music, now envisioned as a true performing arts center (long before such facilities became popular), a multipurpose facility with an auditorium for the Orchestra, another for opera and theater, and a smaller hall for recitals and lectures. Walker’s 1932 renderings show an imposing structure, modern in design and monumental in scale. The newspapers gave the project extensive coverage.

The building was not to be, however. As the Great Depression deepened in the early 1930s, the prospect of raising the required $5-6 million became untenable. By the mid 1930s the Association had given up and was trying to sell the lot, while Stokowski, looking beyond Philadelphia, had begun his gradual departure from the Orchestra.

The site of the ill-fated Temple of Music became a municipal court and a surface-level parking lot before the Four Seasons hotel was built in the 1980s. Meanwhile, the Orchestra would not get its new home in the Kimmel Center until 2001, in a move that, like the one proposed in the 1930s, was not without its critics. Had things turned out differently some eighty years ago, Philadelphia’s cultural landscape would have been quite different, with concert and theater goers joining museum patrons in flocking to Benjamin Franklin Parkway rather than South Broad Street, and perhaps having created a nexus for higher density development that is only now happening on the tails of the Barnes Museum. 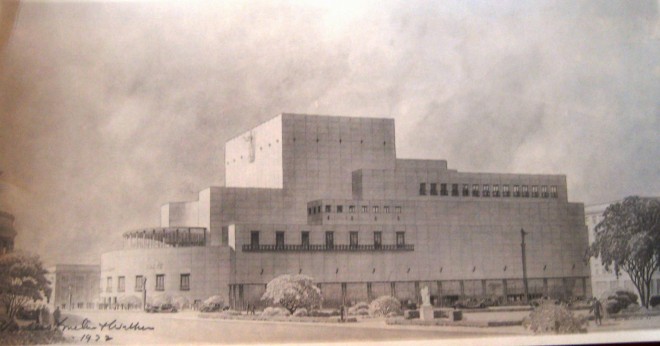 “Temple of Music,” 1932 artists’s rendering. Courtesy of Athenaeum of Philadelphia

Note: The Athenaeum of Philadelphia is the repository of the records of the Philadelphia Arts Association, including extensive correspondence, reports, and architectural drawings of the Temple of Music.