A Hale In Purgatory 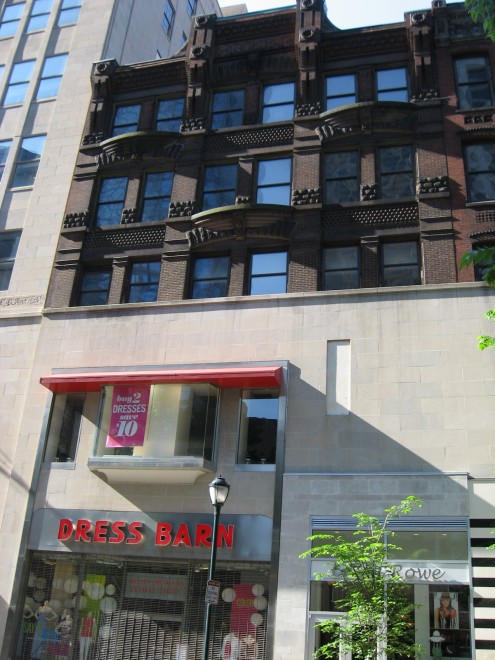 This little mangled-up beauty on the 1700 block of Chestnut Street is one of those buildings that reminds you that you have to keep looking up. What seems like the usual Chestnut Street storefront becomes a Monstrous Marble-Cutting Dungeon from the Great Baron of the Baroque, Willis G. Hale.

That’s right… this is one of Willis G. Hale’s last surviving Center City buildings, one of only two in the Rittenhouse Square area. The mythical Willis Gaylord Hale has been discussed extensively on the Hidden City Daily (and more is to come). His eccentrically embellished designs were briefly the stuff of Gilded Age amusement. Wickedly out of style by the time he died at age 59, one memorial to him spoke about how his benefactors must have been spoiled rich fools that threw their money at him due to a “lack of education and inherited standards of taste.”

This story, however, doesn’t start with Willis Hale, but with one Edwin M. Greble, once the most respected Marbleworker in Philadelphia. Known for “monumental designs” in Italian marble and brownstone, his continuously expanding business began in 1829 and relocated twice before settling down at a massive marbling center at 1708-1714 Chestnut Street in 1849, back when that part of the street was still called “West Chestnut.” This guy was famous in his own time… everyone wanted a gravestone by this sculpting, stonecutting marblemonger. 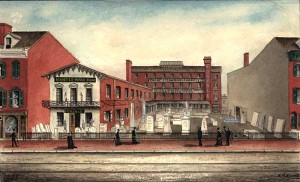 The Greble Marbleworks | Source: The Library Company of Philadelphia

When Edwin Greble died in 1883, his property became the Greble Estate, directed by his greedy trustees, Bloomfield Brower, D.T. Pratt, and William J. Dreer. Where anyone else would see a perfectly usable industrial space, the trustees saw dollar signs. They immediately sold off the western half of the land. With tons of money to burn, they commissioned Willis G. Hale to design a speculative five story office building to fill the 44′ x 150′ eastern half.

Though uncommonly symmetrical for a Hale design, the facade doesn’t pull any punches… in fact, its roundhouse kicks you in the sternum. Covered in brick, Hummelstown brownstone, and terra cotta panels, the 25 inch thick facade has staggering 15 inch faux-balconies under every other double-set of windows. 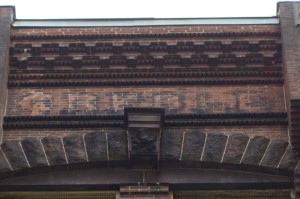 The top was ornamented with a crown stating “Greble” in iron letters between two (long lost) finials, as if giving the world the finger with both hands. The building was completed in June, 1886. The construction contractor was Lew Havens.

Though the building was set back five feet to comply with an 1870 city ordinance widening Chestnut Street, the trustees sued the city in 1888 for $2,200 to pay for the 5′ x 44′ piece of land that would be given up. The greedy bastards got their money but the suit was later overturned by the Pennsylvania Supreme Court. The case is often referenced in other eminent domain-related cases. 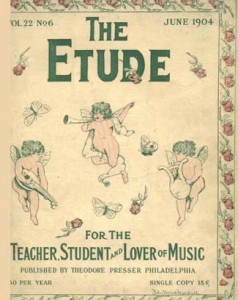 An issue of the Etude published at the Greble Building

Once opened, the Greble Building held art and music studios for women (a function it would continue to have for 40 years) and the storefront sold D.M. Lane’s carriages. Various other tenants came and went until 1893 when most of the Greble was rented by Theodore M. Presser for use by his rapidly expanding music education and publication company. At the Greble Building, musicians taught classes and ran their Music Teachers National Association and Presser published the famous Etude. In 1904, Presser purchased the C.S. Caffrey Building (also built in 1886) next door and renamed it the Presser Building. He would keep several offices in the Greble, which would become dominated by the John W. Graham Carpet Company, Mary Brevard Roberts School, and the American McAll Association for the next couple of decades.

In 1921, the Theodore M. Presser Company was expanding so rapidly that Presser purchased the Greble Building and combined it with the Presser Building. The combined buildings, along with the massive Presser Annex (built by Presser in 1912 on the site of his own house at 1713 Sansom Street), created a humongous 40,000 square foot Presser Complex that was connected by three pedestrian bridges and an underground tunnel. It became THE music center of Philadelphia. 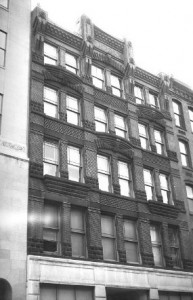 Presser would go on to become a highly successful businessman and philanthropist. Even after his death in 1925, the Presser Company acquired many other music companies and distributors. They kept some offices in the Greble-Presser Building up into the 1960s, when the Presser Annex was sold to Provident Bank and demolished to make way for the Philadelphia Stock Exchange (now Sofitel Philadelphia). The Presser Company still exists, now based in King of Prussia.

After that, the Greble Building fell into obscurity. In 1968, it was noted for having the oldest continuously operating dental office in Pennsylvania. Other than that, nothing. In later decades, the upper floors of the building would no longer be used and only the storefronts would see change. In the 1980s and 1990s, Herman’s World of Sporting Goods was the dominant store.

Today, the Greble/Presser Building is disturbingly altered and in pretty crappy shape. Only the top three floors of the facade are visible. The original cast iron front door is long gone-the upper floors only seem to be accessible through the storefronts. The rear of the building is completely boarded up. This seems to be yet another situation where a Willis G. Hale masterpiece is living a pitiful, beat-up life. It is currently owned by the Pennsylvania Real Estate Investment Trust, who bought the Greble/Presser in 2003 for $1.25 million.

Willis Hale’s Greble Building is not on any historic register or list of endangered places, but should be on both. Make sure to check it out while its still standing, because like MANY other former Center City Hale buildings, it may soon be gone!