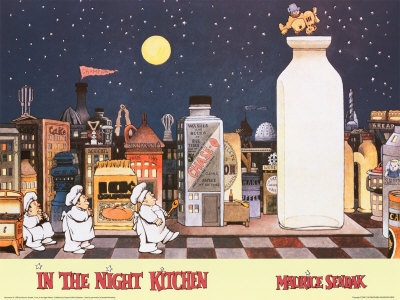 Editor’s Note: In memory of Maurice Sendak, I’m republishing this piece, which originally ran as part of a longer article on PhillySkyline.com February 22, 2009. Sendak’s vision lives inside so many of us, including my own children. They grew up on his work, powerfully drawn to even the strangely disconcerting “Brundibar.”

Of all the skyline images in Philadelphia, perhaps the one that hangs on the second floor of the Rosenbach Museum is most achingly familiar — and not because the tallest building is a slick, bulky glass tower that rises above a wide plaza. This isn’t the contemporary city, but rather the skyline of memory: Maurice Sendak’s interpretation of his mother’s pantry, the dreamscape city of In the Night Kitchen.

Sendak’s skyline, which itself is seared into the childhood of so many, is a view to the fluid mind of a child, who so joyously, and sometimes melancholically, conflates forms, names, sounds, and memories. “What interests me,” says Sendak, “is what children do at a particular moment in their lives when there are no rules, no laws, when emotionally they don’t know what is expected of them.” Then, milk bottles become glistening towers, salt shakers Victorian palaces.

This is Sendak’s territory, a place of a child’s “ungovernable emotion,” where the urban form is tangible, alive, still another wild thing. No other children’s author quite gets this intersection of childhood and place without mythologizing the moment; Sendak’s Brooklyn of the 1940s was brilliant and frightening, loose and strict, maddeningly social and terrifyingly lonely.

Now, thanks to a long-evolving relationship between the author and the Rosenbach Museum and Library, Sendak feels as much part of Philadelphia as New York. His life’s work is here, for 10 more weeks on display in the sprawling and intimate “There’s a Mystery There: Sendak on Sendak”. Here’s the human scale of Brooklyn in Pierre and The Sign on Rosie’s Door; Little Lorie’s Manhattan, Mickey and Max and Kenny; the war-time Prague of Brundibar. Here too is Sendak’s original drawing of the languid streetscape of an Italian village in Philadelphia author Frank Stockton’s The Griffin and the Minor Canon. In that book, Sendak makes a Victorian fairy tale about a medieval town resonant. The fearful villagers grasp for but don’t seem to be able to control their future.