Planning To Begin On “Submerged” Section Of Viaduct 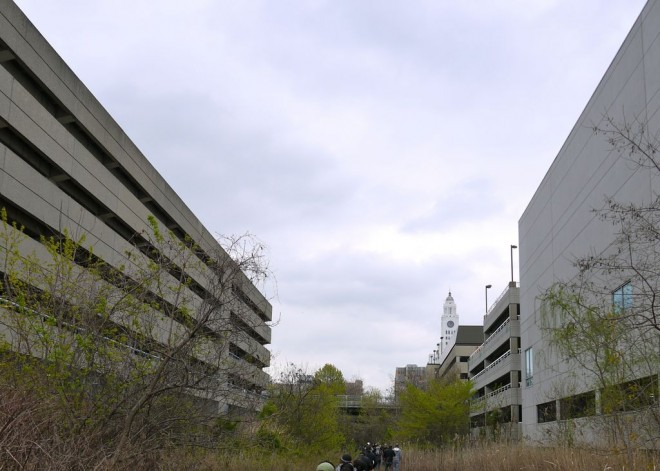 The Hidden City Daily has learned that the Community Design Collaborative will award a service grant to the non-profit advocacy group ViaductGreene for a first phase study of transforming a section of the underground City Branch railroad that extends west from the elevated Reading Viaduct into public space.

The design work, which will cover the underground section of the railroad between 13th and 17th Streets, will be done by partners and staff associates from the landscape architecture firm Olin Studio and the architecture firm Bohlin, Cywinski, Jackson.

This project will begin as the first design phase of the elevated section of the Reading Viaduct park comes to an end and the project–for an initial neighborhood park on the so-called SEPTA spur–goes out to construction bid.

The planning project, resulting in site analysis, renderings, and biddable documentation with cost estimates, will begin as soon as Viaduct Greene is able to raise the Collaborative’s $1,500 administrative fee and will be completed by November.

Forthcoming PennDot reconstruction of the section of Broad Street that is a bridge connecting the Terminal Commerce and Inquirer buildings has inspired this initial phase of planning. ViaductGreene also hopes to spearhead an international ideas competition for the future of what might be a 3 mile park combining the submerged and elevated sections of the Viaduct.

The planning process necessitates the creation of a community task force of about 20 people, which will include Paul Levy of the Center City District, Mark Focht of the city’s Department of Parks and Recreation, and Stuart Appel, a Temple University professor of landscape architecture whose spring 2012 studio produced a comprehensive analysis of the site and its prospects. The group will also include a representative of Community College of Philadelphia. CCP’s property connects directly to the site.

Developer Bart Blatstein, whose Tower Investments owns several properties in the area of the submerged rail bed, including the connecting Inquirer building, has indicated his support for the planning process.

The planning area, originally to go west to 16th Street, has been extended one block to allow the design team an opportunity to consider the transition between the covered rail tunnel and the rail bed going west, which is exposed to the open sky.