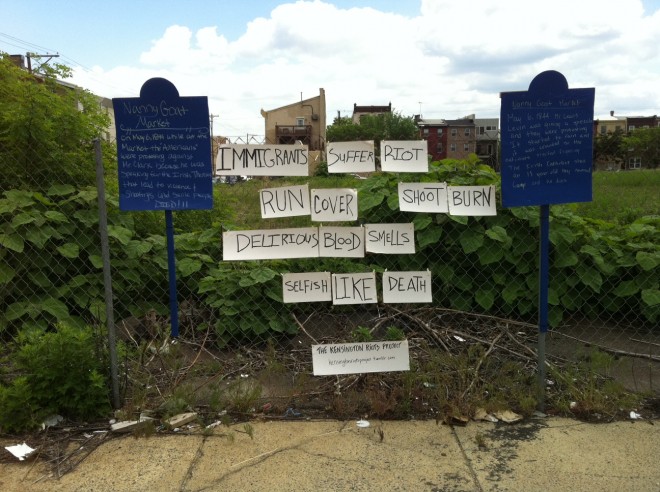 The Hidden City Philadelphia Festival celebrates the power of place through the imagination of contemporary artists. The festival creates an avenue for the public to visit abandoned, obscure, or inaccessible sites of historical and community interest throughout the city. Artists of diverse disciplines and media create site-specific work that illuminates the memories (and possible futures) of these places.

The first festival was held in 2009 and featured 10 artists at 9 locations. The next Festival will encompass roughly twelve heritage sites within the city and will be open to the public May 23-June 30, 2013. Hidden City launched a Call For Proposals last month open to artists, collectives, organizations, designers, educators and others. Proposals are due by July 1. The festival will feature site-specific engaging projects integrally connected to the history of the space and its possibilities for future use.

During the lead up to the festival we’ll be profiling socially-engaged projects in Philadelphia and beyond that are site-based and responsive to the location’s community and history. One current initiative is the Kensington Riots Project, a collaboration between Arab-American youth and Philadelphia-based artists Jebney Lewis and Maria Möller. The project “explores the country’s challenging history of immigration through the lens of the anti-Irish Catholic Kensington Riots of 1844.”

The riots occurred during a time of debate over native-born Americans and immigrants and the conflicting ideas of religious freedom, job competition, and models of government. Through a series of workshops facilitated by the artist duo of Lewis and Möller, students collaborated in creating theater, shooting photographs, writing texts and creating site-specific installations in their Kensington neighborhood.

The works were installed on the street for passersby and visitors to experience. Works will also be presented this weekend Saturday, June 2 and Sunday, June 3, 12-6PM at the White Space at the Crane Arts Old School, 1417 North Second Street along with their outdoor installations nearby.

The project is supported by The Pew Center for Arts & Heritage through the Heritage Philadelphia Program, the Leeway Art and Change Grant, the Greenfield Intercultural Center of the University of Pennsylvania, and the Philadelphia Photo Arts Center.