In Praise Of Sister Cities 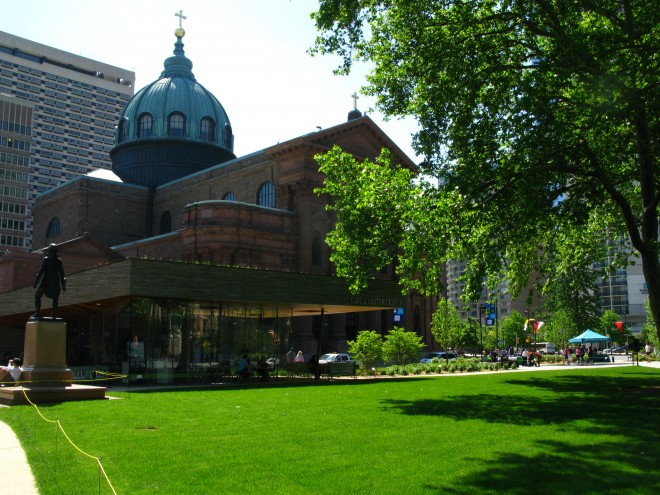 I’ve never been much moved by the Cathedral of SS. Peter and Paul; the brownstone, which was probably intended to glow warm in the afternoon sun, only feels dark and a little foreboding. The building itself looms, but without the monumental scale necessary to command attention–and so there it sits on Logan Square, cold and heavy, but all too quiet and disengaged.

Part of the problem is a lack of clear design vision, probably a result of compromise between heavy-handed clerics and the three separate architects they hired and fired in the 18 years it took to complete the building. Part of the problem certainly, at least in the last 30 years, is the disengaging landscape of the square itself.

Now that has changed with the brilliantly surgical remake of Sister Cities Plaza by DIGSAU Architects and Studio Bryan Hanes on the east end of the Square directly in front of the cathedral. Developed and managed by the Center City District, this little park, with its Modernist cafe and Wissahickon-inspired stream, is so much fun and so light that it literally draws out the stolid cathedral from its impassive moroseness, pulling it forward into the life of the city itself. 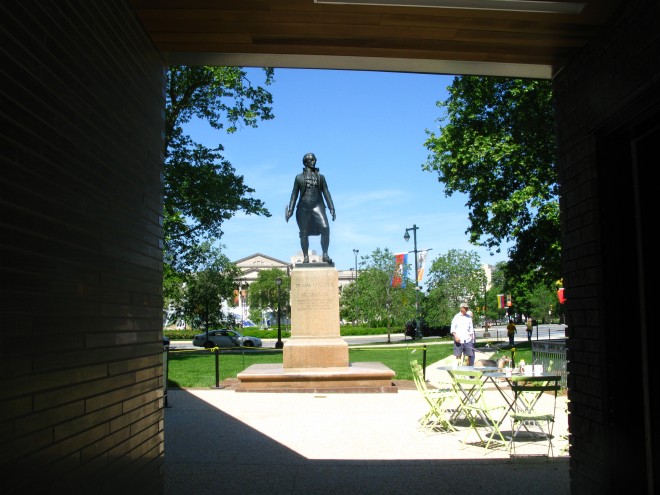 But not only the cathedral. The new park frames its views with alacrity and takes full advantage of the grand existing plane trees and the two works of formal statuary that no one had ever noticed or cared about before. The Sister Cities fountain itself is a legible statement on the city’s long-standing international alliances (which amount mostly to cultural exchange but increasingly to business partnerships) and serves as a place for kids to get soaked while criss-crossing the jets of water (which vary in height according to the size of the city they represent).

Surely the best thing here is the cafe with its green roof and wide glass wall facing the Swann Memorial Fountain. That glass wall will turn the cafe into a bright winter garden. But the rest of the year the architects have given us a range of seating options–covered, shaded, full sun, inside and air-conditioned–that will attract people from Center City to the Parkway, creating the much needed hinge connecting the two quite different realms. Critically still, by signing up a first rate operator in Milk and Honey, CCD shows us how important it is to bring high quality commercial uses into our public spaces. Logan is the only one–but certainly not the last–of William Penn’s five original squares where it’s possible to have a proper cappuccino and ponder the world around you. That world, at least insomuch as it might be visually stimulating and urbane, has now become quite a bit better.