A (Grapefruit) Tree Grows In Kensington 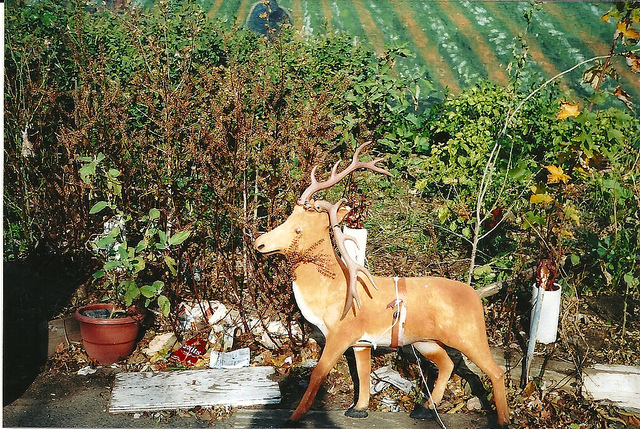 Here on North Fifth Street in West Kensington, amidst vacant parcels reverting to nature or to landfill, Manuel “Manny” Rivera tends his well pruned–and now budding–peach trees, his carefully arranged ornamental deer statues, and the tightly organized rows of beans that fade almost seamlessly from three dimensions to two into the mural of an agricultural scene painted behind them. (The mural, painted in 2007, 15 years after Rivera started his garden, refreshingly depicts an existent utopia in a neighborhood, rather than an envisaged one far away.)

On the south side of the lot, a homemade greenhouse hugs the wall of Manny’s house like a chrysalis. Step inside, and the plant life and climate turn equatorial: fat orbs of grapefruits and lemons drip from trees, and it’s hot. Really hot.

Rivera started his garden over 20 years ago when he missed the citrus of his homeland Puerto Rico, where his father had a garden. Rivera quickly blossomed into an avid gardener. His mini-farm is now at near cultivation capacity. “If I had more space,” he says, “I would grow more.”

But Rivera does not own this land–it’s owned by a combo of absentee private owners and the City of Philadelphia–which puts it unwittingly at the nexus of current policy discussions over vacant land, immigrant agricultural traditions, and the contemporary urban gardening movement. 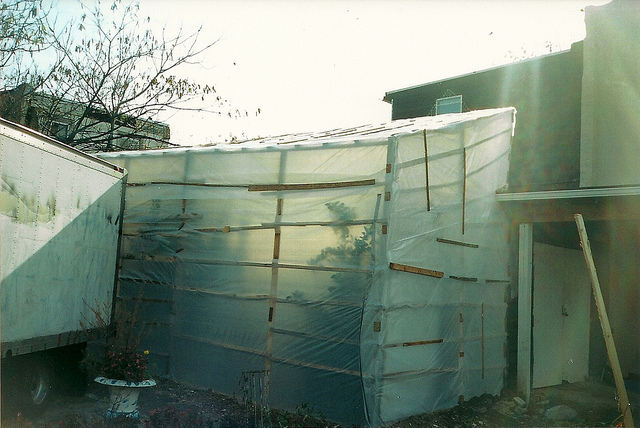 With vacant land use policy still up in the air, it’s unclear whether established gardens like Rivera’s will be grandfathered in situ, or if any garden-friendly legal process that does develop will only apply to new gardens. Such policy would be blind to how special Rivera’s patch is, no matter how big the grapefruit or tender the beans. “That’s one of my biggest concerns moving forward,” stressed Amy Laura Cahn, head of the Garden Justice Legal Initiative at the Public Interest Law Center of Philadelphia, who accompanied me on a trip to Rivera’s garden and orchard, “that the City’s new vacant land policy will streamline the process to access land for lease or sale and make it easier for folks from now forward, without looking to how to preserve the legacy of existing gardens, how to compensate for the sweat equity, and how to maintain these decade-old anchor community institutions.”

If neither the emerging vacant land policy nor land bank legislation now up for discussion account for the preservation of existing gardens, insecurity and evanescence can be anticipated for many of the city’s gardens tended by those who don’t own the land. This will not be the first of such episodes in Philadelphia: from 1994 to 2008 the number of gardens in the city was halved, from 501 to 226, as found by Domenic Vitiello, Penn professor of City & Regional planning, in this 2008 report . As we reported last year, this trend was due to the confluence of development pressures, the dismantling of the city’s community garden support programs during the 1990s, and the aging of first-generation immigrants who brought their homeland agricultural traditions. 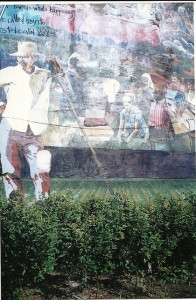 The genealogy of Rivera’s garden reveals how it survived the 1990s. Rivera did not receive material or technical assistance from programs run by the Penn State Cooperative Extension, Pennsylvania Horticultural Society (PHS), USDA, or like organizations, as many other gardeners did. He worked the land in an area of the city that was not experiencing development pressure (it now lays in the foreseeable path of development). Lastly, he was part of one of Philadelphia’s more recent immigration waves from Puerto Rico of the 1970s, and remains able-bodied and enthusiastic about growing his fruits and vegetables.

Councilwoman Maria Quiñones-Sánchez, whose policy ideas are central to the debate over vacant land, has reached out directly to Rivera. She pointed out the legal and development complexities of his occupation of the land: the parcels are prime for infill housing, but Rivera has been providing a service by maintaining them for all these years. And then there’s the fact that only some of the 5 or 6 lots his garden occupies are publicly owned; Sanchez attested that at least 2 are under private ownership. “Manny [Rivera] has taken care of those parcels,” she emphasized, “so there has to be a middle ground. I would never displace him, but there has to be a balance.”

Sanchez was eager to promote Mayor Nutter’s anticipated announcement of a final “open door” policy, in which a resident would be able to buy a vacant city-owned parcel adjacent to their property for a nominal fee, if it is for a “community development” purpose. By definition in the policy, this includes community gardens that demonstrate significant community benefit. The passing of this proposal into law would mean that Rivera could purchase up to two of the city-owned lots next to his house for next to nothing. If he wanted to purchase more, however, the appraisal value would apply and he would be required to pay the going market rate for the remaining lots.

Sanchez stated that her office alone has around 200 applicants attempting to gain ownership of their sideyards, many of which are gardened. Indeed Rivera’s garden turns out not to be an anomaly, but something of a typology in the neighborhood. “There are still a lot of gardens nearby in sideyards and backyards that aren’t owned,” confirmed Vitiello, whose research focuses on urban and immigrant agriculture. At least some of these gardens contain similarly exotic fare: in an article in City Farmer, Libby Goldstein, the first coordinator of Penn State’s Urban Gardening Program, described the scene at 2305-13 North Palethorpe Street as “Puerto Rico in Philadelphia,” with a chicken coop, pigeon peas, and bananas. Eileen Gallagher of PHS pointed to the gardens at neighboring Norris Square, where traditional Puerto Rican crops are grown. She added via email that, “with so many people using un-heated hoop house[s], it’s not so unusual to be growing tropical fruits.” 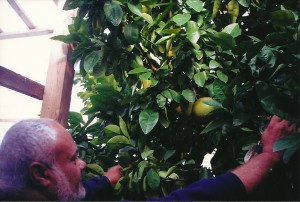 While neighbors and family use the garden as a source of food, education, and wonder, it is Rivera alone who keeps it blooming. Yet if he hopes to maintain more than a fraction of it for years to come, collaboration with these other neighborhood gardens might be in order. Vitiello affirmed: “Strong coalitions of organized constituencies of gardeners in other cities (New York and Detroit are good examples of this) have been really important for advocating for policy changes, building networks of mutual support, articulating gardeners interest. In Philadelphia we haven’t had that at all.” Until now, that is. Today from 2-6PM the Norris Square Neighborhood Project is hosting a Garden Resource Fair in their Las Parceles Gardens to bring together organizations and gardeners. Cahn will be there, presenting on land legal issues for gardeners.

When she asked Rivera if he would be in attendance as we all parted ways, he answered, “yes.”