Even Slums In The City Of The Dead

Necropolis is an old term meaning city of the dead, and it’s a fitting term for the area of North Philly bounded on the east by N. 29th, on the west by Kelly Drive, on the south by W. Lehigh Avenue, and W. Clearfield St to the north. Here is Laurel Hill, Mt. Vernon, and Mt. Peace cemeteries, and St James the Lesser Church and cemetery, each one a neighborhood in the larger city of the dead. Like all cities, each neighborhood has its own characteristics, its own population, and its own unique history. St James stands a little apart with its own church. Mt Peace is a vast, well maintained example of integration–its graves reflect racial and ethnic diversity. The massive Laurel Hill is truly the wealthy suburbs. Its lawns are immaculate, and its population a who’s who of the Philadelphia monied elite. But like all cities, there are neighborhoods that have seen better days. Neglect sets in and nature begins to retake the land. Once glorious structures become run down and the crime rate escalates. In cities of the living these places are called slums. In Philly’s necropolis this place is called Mt. Vernon. 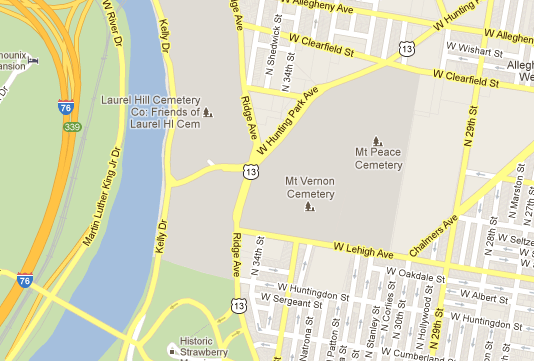