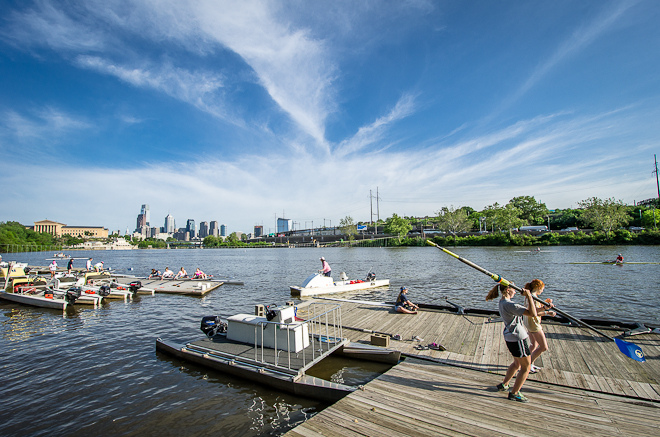 This Saturday, June 2nd, from 4-7PM, Philadelphia is invited to celebrate the 150th anniversary of Boathouse 14, presently the Philadelphia Girls’ Rowing Club, the first and only all-female rowing club in the US. The party will bring together historians, preservationists, and rowing enthusiasts for a commemorative cocktail hour in celebration of this most unassuming boathouse on Kelly Drive with its outsize role in the development of American sports.

Over 150 years ago it was the nation’s first skating club, the Philadelphia Skating Club and Humane Society (PSC&HS), built in 1861 on what was then an open stretch of the Schuylkill. For years it was the only permanent building along the riverbank. The PSC&HS was the first purpose-built recreation building in the country. The skating club was an early leader in ice skating. Its members founded and manned Philadelphia’s first river patrol and water rescue squads. They saved countless skaters from the icy waters of the frozen Schuylkill each winter, hence the non-canine-related reference to ‘humane’ in the organization’s name. 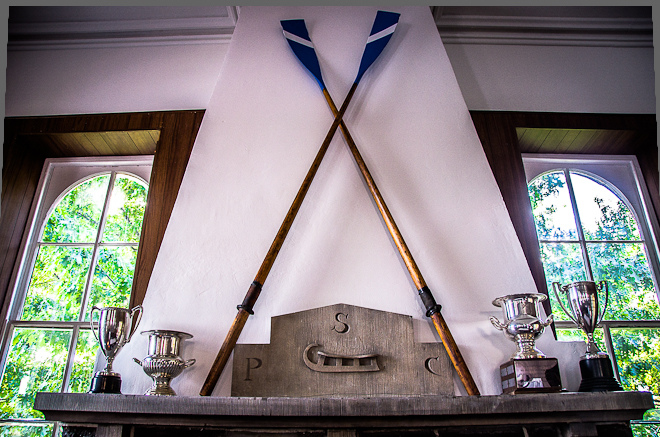 At the turn of the century rowing became the predominant river sport on the calm, open surface of the Schuylkill. Soon, #14 stood alongside 12 additional boathouses lining the riverbank, each one dedicated to the sport of men’s rowing. When pollution raised water temperatures to the point that winter freezes were rare, the PSC&HS moved its activities to an indoor skating rink where members trained successfully to compete in national, international, and Olympic events. PSC&HS members continue to set local and national precedents to this day.

While the skating club was newly secure in an indoor venue, the future of Boathouse Row’s “plain villa” became uncertain. Four Philadelphia women stepped in with a plan that would save a local icon and impact the history of women in sports. 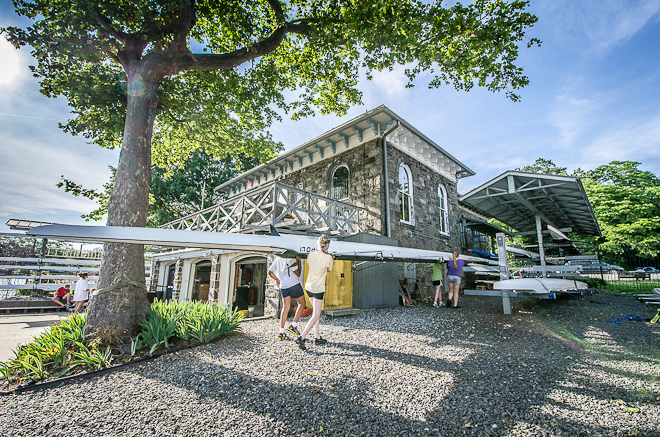 Steadfastly believing that women should have equal access to the male dominated sport of rowing, Ruth Adams Robinhold, Gladys Hauser Lux, Lovey Farrell, and Ernestine Bayer decided to form the Philadelphia Girls Rowing Club (PGRC) and take up permanent occupancy at Boathouse #14. Their decision was a bold move at a time–1938–when Boathouse Row was a decidedly “male space” and all equipment used in the sport was designed for the male physique, according to historian Elizabeth Milroy, chair of American Studies at Wesleyan University.

The women faced challenges at every turn. They had to find boats and coaches, train for the physically demanding, technically complex sport in heavy sculls designed to accommodate men’s narrow hips and large hands and learn to do it all in a waterway where competition was fierce and male athletes were already rowing at a high level.
The competition extended from the athletic to the practical. 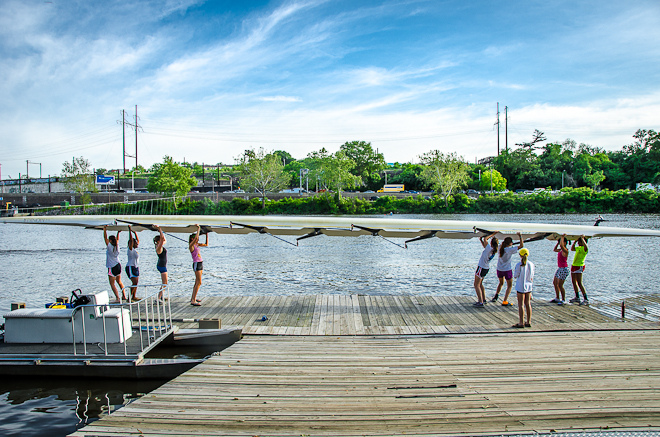 Taking the hull off the river | Photo” Theresa Stigale

“The Schuylkill wasn’t the river we see today where crew teams practice in open space,” says Milroy. “It was crowded with steamboats and rented sailboats moving up and down the river.”

Prior to the formation of the Philadelphia Girls Rowing Club, women’s rowing had been mostly recreational and sometimes functional. “The opportunity for rowing began at ferry points at rivers before bridges,” she explains, tracing the sparse history of women in the sport. Long ago, if a ferryman was occupied when a traveler approached a ferry point in England for example, his wife or daughter could row the traveler to the other side of the river. “There is evidence that women rowed but didn’t necessarily compete.” Philadelphia’s first all-female rowing club, established in 1938, was to change that in a significant way. 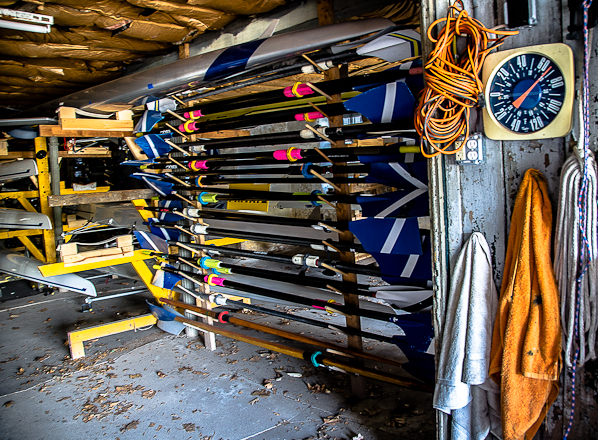 Hulls and oars in storage at the PGRC garage | Photo: Theresa Stigale

The fledgling club quickly became a haven for female rowers. It grew slowly and steadily, and with each hard earned success members gradually gained the respect of rowers and ultimately the nation. America’s first all-women’s rowing club eventually made crew accessible to every woman in the country. Thirty years later, in 1967, the PGRC was the first American women’s rowing club to represent the United States in international competition when eight PGRC members raced at the European Championships in Vichy, France. At that time, competing in the European Championships was the ultimate achievement in women’s rowing. By 1976, PGRC’s members were instrumental in bringing the sport of women’s crew to the Olympic Games.

Today, the founders’ early passion and dedication to women’s rowing endures. It inspires a unique level of camaraderie between members. The club is home to Olympic, Masters, and National Champion rowers, the Agnes Irwin School crew team and amateur rowers of all abilities and ages. It is not unusual to spot PGRC sculls on the river with women from ages 16 to 75, rowing side-by-side and providing each other with mutual guidance and support. 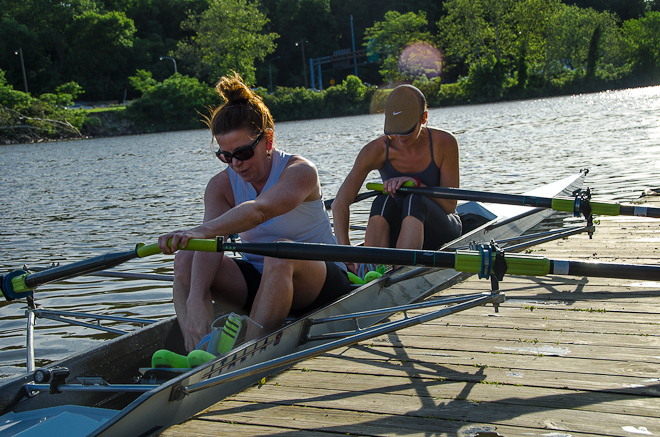 Members of the PGRC prepare for a run up the Schuylkill River | Photo: Theresa Stigale

The June 2nd anniversary celebration at Boathouse #14 will provide an opportunity to celebrate 150 years of history as well as the 99th birthday of PGRC’s oldest founder, Ruth Adams Robinhold. The event will also mark the 45th reunion of the PGRC Eight who competed in Vichy, France. After the event, the club will begin requesting donations for the restoration of the boathouse, a National Historic Landmark in need of repair.

“It’s going to be a heartwarming and magnificent affair,” says Sophie Socha, President of the Philadelphia Girls’ Rowing Club and a member of the Vichy Eight. “We’re going to be celebrating the house because without it there would be no club.” The building, reminiscent of 19th century Philadelphia, appears on the National Register of Historic Places. “It’s a historic building that needs care and attention. Our lady needs fixing.”

Tickets to 150 Years…Then and Now are available at $75 per person at www.philadelphiagirlsrowing.org.