Do You Believe In Reincarnation? 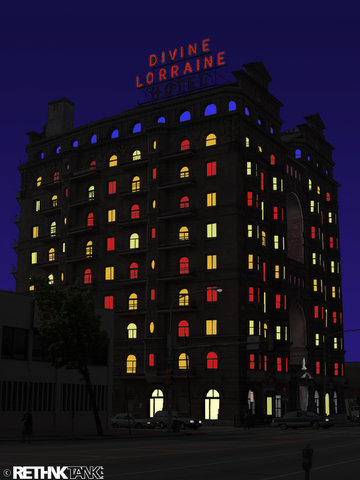 With enough capital investment, the historic Divine Lorraine Hotel, in the death throes of abandonment and vandalism, could become a full-service funerary center and crematorium. It would be the nation’s tallest columbarium, a multi-person vault for the storage of funerary ashes and personal mementos.

The speculative columbarium concept, called “Urban Reincarnation,” is the brain-child of architect and industrial designer Jason Lempieri of RethinkTANK Design llc. It would turn one of the city’s most neglected architectural monuments into a “a lantern, a good steward of the neighborhood by day and night–a beacon instead of the ghost it is now,” he says.

And it holds more promise for North Broad Street and greater appeal for Philadelphia in general than might at first be imagined.

Lempieri, who is seeking investors to champion the project, expects that the initial multi-million dollar cost of Urban Reincarnation would result in a Divine Lorraine with a fully-restored façade within a year after city approvals. Within three more years the stripped, damaged interiors of the long-abandoned hotel would be transformed into contemporary spaces suffused with natural light, rich color, and natural textures. 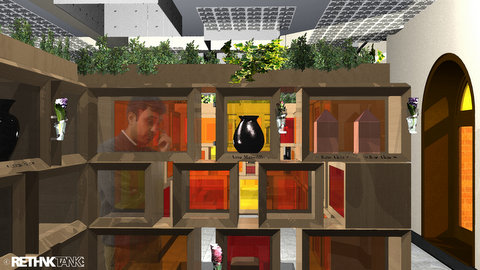 In contrast, turning the Divine Lorraine into a hotel, apartment complex, or even a school campus, as has been proposed more recently, would take many years longer and would cost tens of millions more. “Given the existing conditions and hotel-oriented floor plates,” says Mr. Lempieri, “you would need significant subsidies.” By comparison he says his design would be “enormously profitable” and provide sales tax revenue to the city.

Ryan Lohbauer, architect and designer at Stanev Potts Architects, who recently converted the Oddfellows Building on Spruce Street from abandoned offices to residential, confirms that converting the Divine Lorraine to apartments or condominiums would be cost prohibitive. “It would take a huge investment of capitol and time–many years–to ensure the Divine Lorraine could meet modern fire and high-rise safety standards,” he says. “If an investor did have the patience to take on that conversion, and the market became stronger it could be worthwhile, but at the moment I don’t think it could command the kind of rents to make it a worthwhile investment” as an apartment building.

Urban Reincarnation could potentially work, says Lohbauer, if it was developed as a full-service destination. “Becoming a destination would have to be part of the entire vision for the future of the building.”

There is indeed a market for the service, according to Suzette Sherman, creator of SevenPonds Inc., an on-line end-of-life information resource and forum. She says cremation is a growing preference in the United States. The rate of cremation now stands at 40% nationally and has already reached 99% in Marin County, California.

“Cremation represents the contemporary person who seeks a different lifestyle, wants to be informed, empowered and have a good death,” she wrote in an e-mail. “I think [Urban Reincarnation] is really beautiful and on target. Jason has worked through the full experience a grieving family would seek for healing from a loss. This concept is augmented by making use of a worthy building that lay empty and purposeless.”

The main floor of a refurbished Divine Lorraine would feature a restored lobby, café, retail space, offices and a museum honoring Father Divine as a community leader and the founder of the nation’s first racially-integrated hotel. Deconstructors have already “pillaged” the upper floor interiors so no attempt would be made to return them to their former glory by historic preservation standards. However, the vaulted spaces on the top floor would be restored and repurposed. The vacant lots outside the building would be landscaped into welcoming gardens for walks and contemplation.

“It would be a place for the living,” says Mr. Lempieri. 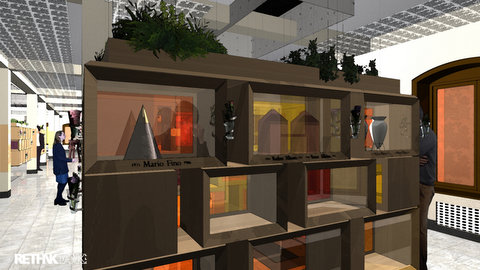 Lempieri has had the Divine Lorraine on his radar since childhood, a time when he frequently passed the derelict building in the family car, gazing up at the looming structure in wonder. Years later he made the building the center of his graduate thesis at The University of the Arts. The neglected hotel seemed like the ideal candidate for innovative re-purposing.

While it may seem peculiar to bring the death experience so close to a commercial and residential area, it isn’t unprecedented. Philadelphia has a long history of keeping its dead close and even at the center of the community. Before the 1900s, every neighborhood had its own small cemetery. They were easy to reach so they were frequently visited and carefully tended. When cemeteries filled they were abandoned and left to lie fallow. As the city grew, bodies in many of Philadelphia’s small cemeteries were disinterred then moved to large, newly created cemeteries in Delaware County. The Urban Reincarnation project aims to bring the cemetery back to city life but in a more contemporary form.

“When was the last time you went to a cemetery?” asks Mr. Lempieri, observing that after the first year of grief visits dwindle. “Cemeteries are faraway, static and what do you do once you get there? They don’t change and we’ve moved on.” His plan for a columbarium, a modern take on the ancient Roman custom of publicly displaying cinerary urns, would give families in grief, casual visitors and even tourists reasons to make return visits to North Broad Street. With a bus stop and subway station just outside its front door and City Hall only a 25-minute walk away, the columbarium would be a destination that visitors could reach easily and frequently.

Throughout Pennsylvania there are cemeteries that provide niche spaces in columbariums but most of those structures are sized and designed like traditional mausoleums. Lempieri’s idea would be Philadelphia’s first large-scale columbarium. The design would shy away from traditional funeral home decor, opting instead for lively and inventive interior architecture designed to make the building feel alive.

Elegant vitrine loculi–the Latin term for compartments where urns stand–would crisscross modern corridors reminiscent of Philadelphia’s street grid. Contemporary art would be on exhibit, changing seasonally and inspiring repeat visits. Each area would be surrounded by pocket-like spaces and alcoves where photos, mementos and artifacts could be frequently updated. Touch-activated screens could become part of each personal display, illuminating the names or presenting the life stories of the deceased in words and images. 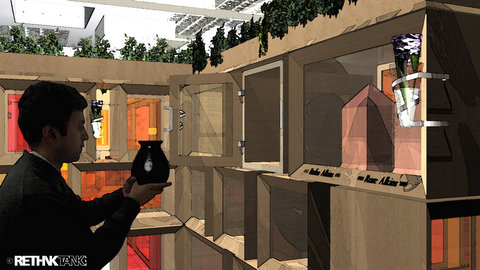 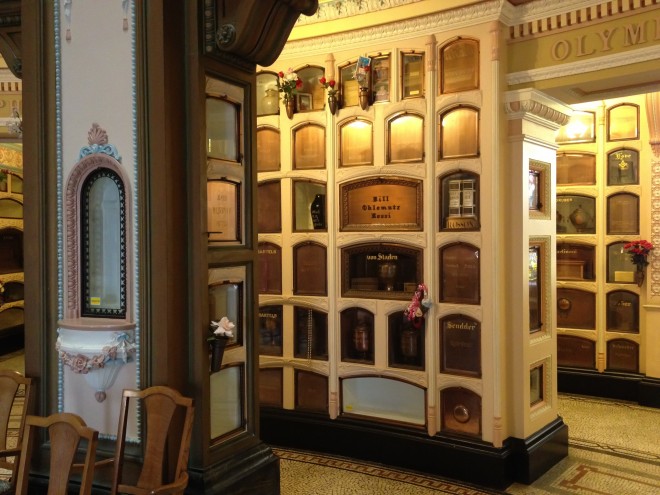 Technology would play a key role within Philadelphia’s columbarium: sensors would be installed throughout the building to replicate an outdoor feel and create the look of natural light. The rites and rituals associated with all cultures and religions would be accommodated at the Divine barring only extreme practices. “It would be a humanist place,” says Lempieri

The designer envisions a range of costs and services, from simple strewmatizing of ashes on the grounds and basic name plates to lavish multi-urn vitrines where contemporary funerary sculpture and installations could be displayed. Millions of dollars generated from just the top-floor being fully-occupied could support the rest of the building. Unlike cemeteries, the columbarium would never be abandoned or disturbed–as a designated landmark it is sure to remain in place for at least a century. “A fund would also be created to maintain the building in perpetuity.”

Nevertheless, resistance to the idea of a crematorium seems likely. Twelve years ago the Northwood Civic Association opposed the installation of a crematorium at Greenwood Cemetery over pollution concerns and negative perceptions of the industry. In November 1998, City Councilman Rick Mariano joined East Frankford residents in their successful effort to shut down the Independence Crematory on Foulkrod Street. According to City Paper, “Neighbors complained of a putrid stench and black smoke” emanating from the crematorium.

A representative of Philadelphia Crematories, Inc. says current standards strictly enforced by Philadelphia Air Management Services ensure air safety, cleanliness and the absence of smoke around every crematorium. Mr. Lempieri has stated that the Urban Reincarnation project crematorium would be state-of-the-art–with abundant filters, scrubbers, point-source pollution upgrades and mandatory maintenance. Furthermore the heat generated would be reused to heat and power the building, creating a sustainable facility. Legislation is currently pending that would see cremation licensing and regulation brought under the U.S. Department of Health. 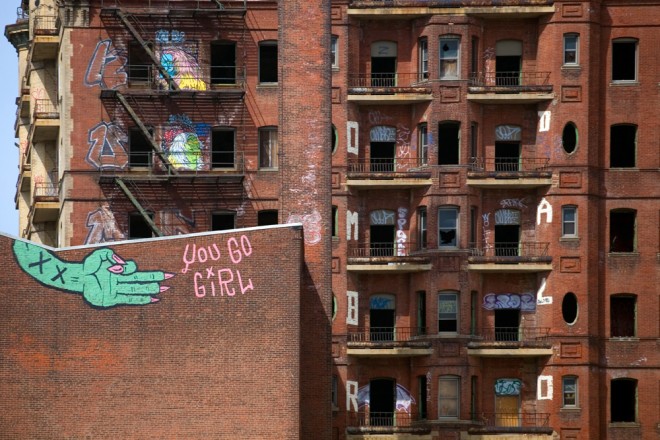 It’s more than potential local resistance that stands in the way of the Urban Reincarnation project being realized. Bureaucratic issues alone could be daunting. Lempieri wonders what category he would check off for zoning–museum, storage, cemetery, and retail would all be possibilities. “It’s an entirely new category,” he notes. In the meantime, as the Divine Lorraine continues to decompose through a process of “demolition by neglect” (despite recent actions by the city to stabilize it), there is a growing urgency to find a new life for the beacon of North Philadelphia.