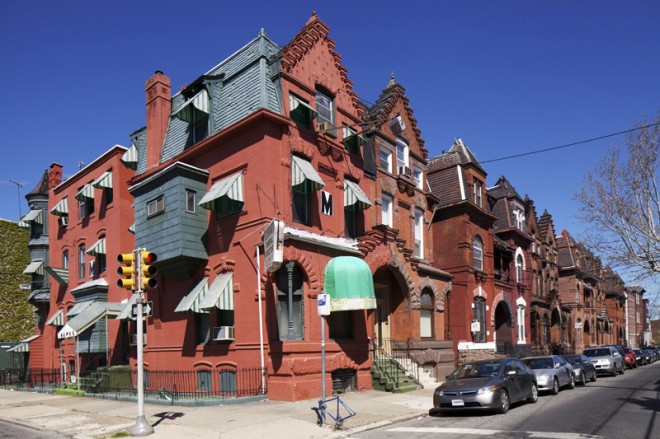 The 1500 block of North 17th Street represents a section of North Philadelphia at a crossroads. A sea of blight surrounds it on one side, while Temple University’s growing off-campus population pushes in from the other, with a smattering of affordable housing projects a short walk away.

Yet with little warning, this is where N. 17th Street briefly changes from downtrodden to majestic, boasting a series of three-story red-brick twin homes–each exhibiting the unabashedly ornate, high-Victorian style of Willis G. Hale.

While the fate of Hale’s remaining high-rises are a legitimate concern, they are hardly the end of his legacy. The late-nineteenth-century architect was as much in his element when he stayed closer to the ground. Hundreds of his houses are still with us in diverse corners of North Philly, West Philly, and Center City, on blocks including 2200 Delancey Place, 2100 North Uber Street, 1900 North 23rd Street, and all around Girard College and the University of Pennsylvania–and that’s to say nothing of his famous Fleisher mansions in Fairmount, or the Ravenhill mansion in East Falls.

Unlike his namesake building at Juniper and Chestnut, these homes’ facades have been spared major alterations and remain much in line with his original intentions. And in contrast to the Divine Lorraine, they’ve soldiered on into the twenty-first century free (mostly) from redevelopment hell. Yet their history is just as much of a testament to the continuous re-characterization of the city’s core rowhouse neighborhoods. Possibly, they may also signal a resurgence of interest in Hale’s art.

Constructed in 1886, the 17th Street homes were one of several projects that Hale designed for the partnership of two Philadelphia business magnates, William Elkins and Peter A.B. Widener. After striking it big investing in streetcars and railways, they turned to North Philly’s rapidly booming real estate market.

“Elkins and Widener were masters of speculative housing,” says Michael J. Lewis, a scholar of Hale’s work who teaches art history at Williams College. “They had the vision to buy eight to ten blocks at a time and lay them out in a way so that mass production made construction cheaper. And there exists a wonderful harmony between that industrial scale and Hale’s personality.” 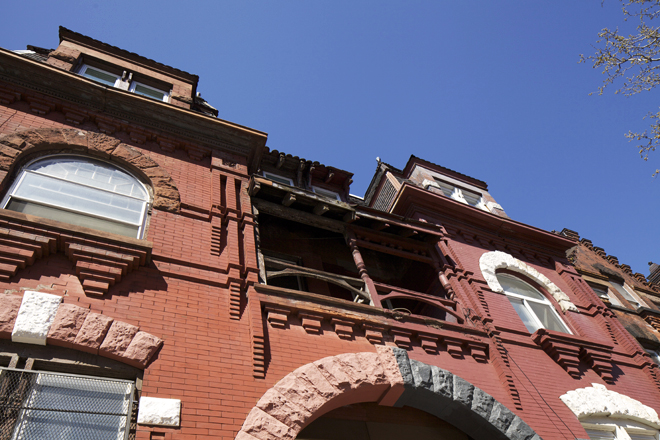 The 17th Street residences were meant to exude lavishness with their prominent mansard roofs, bold stone foundations and trim, and shared archways over paired entrances. They also include a liberal placement of corbels, one of Hale’s most recognizable signatures–those inverted pyramids supporting windowsills and racing up stepped gables.

Lewis describes them in terms of performance art. “There’s a melodic play of rising and falling in these houses,” he remarks. “It’s remarkable how his style dances lightly on the surface.”

Hale began his career in Wilkes-Barre (incidentally Lewis’ hometown) where, struggling to win jobs, he almost abandoned architecture for good to become an opera singer. Notably, a half century later, Louis Kahn was similarly influenced by what Lewis, speaking of Hale, calls a “musical conception of architecture.” 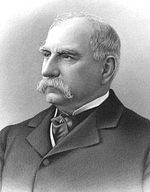 Elkins and Widener acquired the land at the corner of 17th and Jefferson Streets from the Indigent Widows & Singlewomen’s Society of Philadelphia. In Hale’s work, the two found a style to serve as a status symbol for the city’s nouveau riche, albeit one frowned upon by the old-moneyed classes of Center City. (Hale also designed Widener’s rambunctious mansion a year later, in 1887. It stood at the corner of Broad Street and Girard Avenue until 1980, when it was destroyed by fire.)

Considering the speculation that these industrial barons banked on, it isn’t surprising that the waspish middle classes didn’t take long to move on from them. By the 1930s, the block had become home to a new set of middle-class Jewish families. After industrial decline took a serious toll on North Philly beginning in the 1950s, the homes served as a source of pride for black families who were able to hold onto them.

Part of that recent past is still visible, like at the corner–the 1500 house–where there still hangs the sign for the funeral home that operated here for more than 50 years, until the owner passed away in 2008. The sign even shows the phone number in its original alphanumeric form: PO3-6624. Yet the remainder of the block has seen a rapid turnover in property acquisitions and residents in the last five years alone, as many of the homes, long suited for apartment rentals because of their size, become new pads for Temple students. Speculation, it would seem, has come full circle. 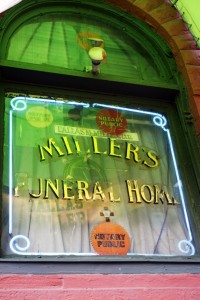 In 1983, thirteen of Hale’s surviving homes on 17th Street were added to the Philadelphia Register of Historic Places. By 2000, when the federally-sponsored Historic American Buildings Survey (HABS) conducted a study of the block, a number of the houses had become boarded up and showed signs of collapse. Reports from L&I repeatedly cited them as imminently dangerous or unsafe.

Ultimately, their survival has been partly a consequence of their place on the Historic Register, as well as the accumulation of City efforts–including through former Mayor John Street’s Neighborhood Transformation Initiative–to attract community developers to reinvest in them. And, of course, as the neighborhood grapples with a growing student body and a controversial proposed Neighborhood Improvement District, 17th Street is brighter on the radar than ever.

Yet also working in the homes’ favor is Hale’s design itself. Although semi-detached in the front, they are in fact linked through arched connecting windows behind the facades. (Always outdoing himself, Hale originally placed the bathrooms in these corners.) Complete demolition of the most dilapidated houses would have caused physical as well as aesthetic destabilization of the block, according to property assessments on file at the Historical Commission office. 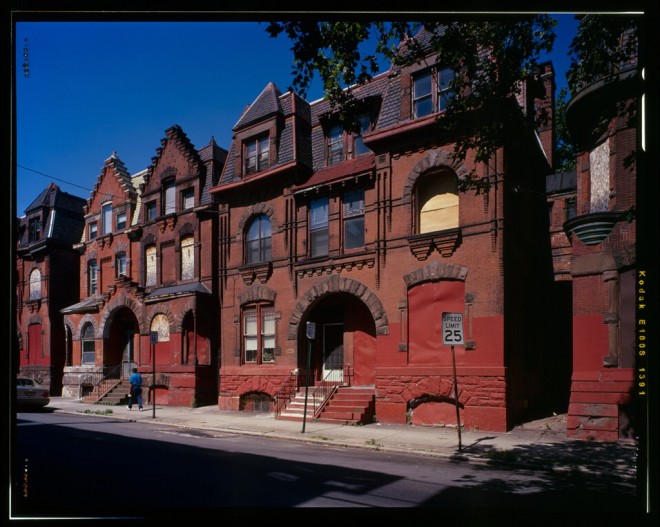 That doesn’t mean all of Elkins and Widener’s development has remained intact. The facades are still there, but the most dangerous buildings have had their rears torn down and rebuilt. One Hale on this block suffered demolition several years ago, the result of a gap in communications between the Historical Commission and L&I, who approved the permit.

Unlike this block, many of Hale’s other developments sit in anonymity with no historical protection at all. (Those that are protected are mainly in Historic Districts, such as Overbrook Farms and the little-known Diamond Street corridor, west of Broad.)

Lewis, the Hale expert, is confident that a renewed interest in Hale’s work will bolster preservation efforts. He sees a generational shift in affinity toward the architect’s once-and-often-derided style.

“It will become a thing of prestige to own a Hale house,” he predicts, giving a new lease to a century-old status symbol.