During my testing of the Norris Apartments, some units passed well below the leakage thresholds, but several failed by a significant margin. Using an IR camera, we could see behind the ceilings to where cooled air spilled from the ducts. In these spots, the builder had to tear open newly finished drywall to access and properly seal the transitions. An expensive and frustrating task, but one from which the sheet metal contractor is sure to learn. Habits die particularly hard in the construction industry; we speak often of creating “green jobs,” but fail to imagine that many existing jobs can be done a lot more greenly.

Now heating contractors can sign on to a LEED job ignorant of these kinds of skills and leave it with workers trained in energy efficient construction.

Curious how a behemoth like PHA–arguably the city’s largest real estate developer–came around to LEED, I talked with Jeff Graybill, their on-site manager (and the only guy I’ve ever seen bike to a construction site). From the street, the most evident green feature is the row of solar collectors slanting upwards from the roofline, and I asked where this idea originated. “That could possibly be a tie-over from our excommunicated leader,” Graybill said, referring to ousted PHA executive director Carl Greene. “Greene pushed PHA to incorporate new technologies which should, in theory, conserve energy over the lifespan of the building.” Rather than turning photons into electricity, these panels heat up the units’ domestic water supply. On an early spring day, I saw a temperature reading of 237 degrees (a refrigerant under pressure, it will attain temperatures higher than water). 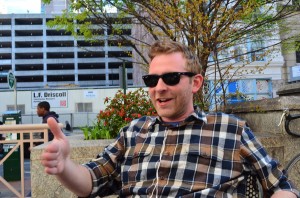 The level care of required by such systems falls outside PHA’s norms of maintenance, and initially, they did not work. “We were fast to adopt some of this technology,” said Graybill, although I point out that solar hot water has been on the market for decades. It’s institutions like the University of Pennsylvania with comfortable budgets, he responded, that tend to premiere these systems. Still, the long-payback model is ideal for PHA, who, as landlord, subsidizes utility costs. “We’re going to be managing these properties for as long as congress says the we should fund Housing and Urban Development,” he said. With a slow rate of return, this time frame makes the investment feasible.

Outside funding often kicks in when PHA incorporates eco-perks like solar hot water into housing, but Graybill watches the numbers, and feels acutely the cost of the LEED certification process itself. “We pay money to be able to say we’re green,” he emphasized, though PHA projects have long met many LEED criteria de facto: small unit sizes, decent insulation, and infill sites. “We’d just never paid for the certification. It’s like a trophy. We could have been using those funds to do so many other things.” 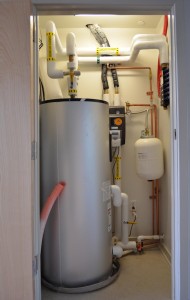 And yet all the costs associated with attaining LEED certification itself–together about $40,000–are only a tiny portion of a construction budget that’s already bloated by expensive union labor, ADA requirements for all units, and certainly these green energy components. That’s to be expected of a public project with broad societal goals. Private developers only have to factor in the bottom line. But at the Norris Apartments and the recently-completed Paschall Village, a project at 72nd and Cobbs Creek Parkway that employs much more far-reaching green energy systems but no LEED certification, the per unit cost was almost $380,000–about two times the rate for a comparable private development.

“Our square foot costs get us in trouble,” Graybill said.

In part because of its association with high costs, skepticism of LEED is on the rise. I join those who question the LEED program’s ties to big construction, and its efficacy at reducing the carbon footprint of American building stock, but I stop far short of claiming greenwashing. Just the opposite at the Norris Apartments is in fact true: these new buildings are green from the inside out.