At Awbury, The Landscape And The Ideals Persist 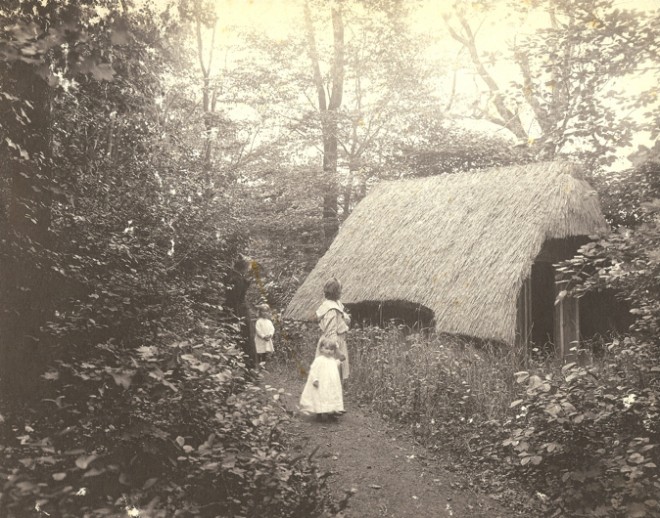 Imagine that the year is 1870, and you are growing up on the fifty-acre Germantown estate of Awbury, a restrained version of a Victorian country retreat. The home’s large windows look out upon an English-style landscape of rolling lawn. The view is occasionally interrupted with copses of native trees and flowering shrubs. In the springtime the birdsong is almost deafening.

Your cousins, grandparents and other relatives abide on the same sylvan piece of land, each family in their own gracious home, for the family is very wealthy, due to your great-grandfather’s enormous success in establishing a shipping line between Philadelphia and Liverpool in 1821. A tenant farm on the edge of the property provides fruit, vegetables, and milk for the compound.

Germantown is still more a summer destination for wealthy Philadelphians than a fashionable year-round residence. But the isolation of the country is only relative, for the train to the city stops at the corner of the estate. There are enough children among the extended family to support a small school, and socializing largely takes place among the relatives. Winters are taken up with sleighing parties and skating, Summers fly by amidst picnics and rambles into the Wissahickon Valley to gather wildflowers. As Quakers, nobody sings, paints, or plays piano; entertainment and edification are found instead in the study and enjoyment of nature, particularly plants. 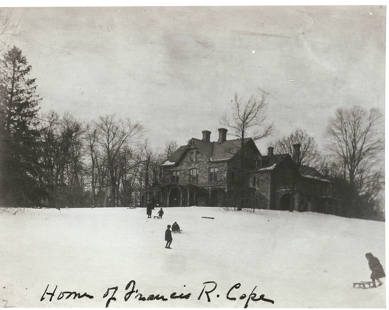 The idyll of every day is interrupted only occasionally, when an aunt or grandmother gently reminds, “Enjoy this beauty while you have it, for it cannot last.”

Thus was the life, or at least how one writer imagines it, of the large Cope family who owned Awbury from 1852, when Henry Cope, grandson of the shipping magnate Thomas Pym Cope, established the estate until 1916 when it became the public arboretum which it continues as today. By that time, the estate encompassed roughly one large city block and included more than 20 homes, all occupied by Cope descendants.

Large estates in the German Township weren’t unusual in the 19th century. After being cleared for agriculture, particularly related to the boom and bust domestic silk industry of the 1820s, the area east of the Great Road, Germantown Avenue, became popular among the newly wealthy, eager to join the ranks of the estimable Philadelphians who established country seats like Wakefield, Stenton, Cliveden and Belfield a century prior.

The estate at Awbury was particularly enchanting. Miles from navigable water, being ensconced in Germantown often required a compromise of one of the landscape features that wealthy Philadelphians most cared about- a long and luscious view. Unlike the riverfront estates on the Delaware and Schuylkill, the topography of Germantown rarely afforded the picturesque viewshed that was so desirable. But Awbury was located relatively high up on the brow of a softened ridge. The older houses in the compound were oriented towards the Delaware River, five miles away but visible on a clear day. The others overlooked a gently sloping meadow, at the bottom of which sparkled the Wingohocking Creek. 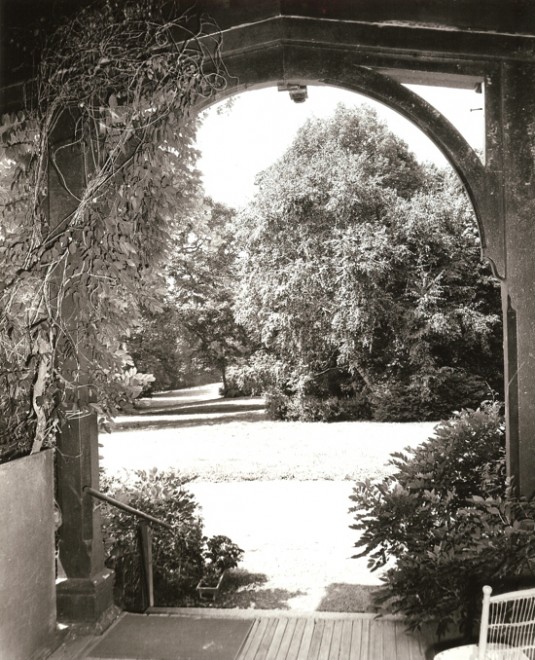 Just as the elders had forewarned, the Awbury of the 19th century was not to last. By the early 20th century even the strong fabric of the insular Cope family was beginning to wear out. Not all children envisioned their lives spent in Germantown, living within the boundaries of Awbury. Even more significant were the cultural changes taking place before the family’s eyes.

The great estates were being felled in the name of progress (their ghosts are visible today only as street names: Mt. Airy, Belfield, Wakefield, Phil-Ellena, Pomona.) Immigrants from Europe and African Americans from the South found work in Philadelphia’s burgeoning manufacturing industry and settled into tightly packed row homes built on the cleared land of East Germantown. This once quiet and genteel neighborhood was now teeming with people. The city, as evidenced by maps from 1910 and 1934 showing “paper streets” already superimposed on the Awbury estate, was anxious to make the entire area available for development.

The pressure to open Awbury for development was mounting, and the Copes were loathe to give up their homes and to acquiesce to the destruction of the landscape they loved. With time running out in 1916, they acted decisively. While retaining ownership of their homes, they turned over the management of a large chunk of Awbury to the City Parks Association, a private organization working to promote the establishment of small parks throughout the city. The estate was to become a free, public Arboretum, intended for the study of trees and flowers and as a refuge for migratory birds. In the next several decades, several plans were drawn up to add various collections of plants, including a rhododendron vale and a rose garden. Although for the most part never executed, the plans perhaps intended for the grounds of Awbury to resemble arboreta such as at the Quaker educational institutions of Swarthmore and Haverford Colleges. 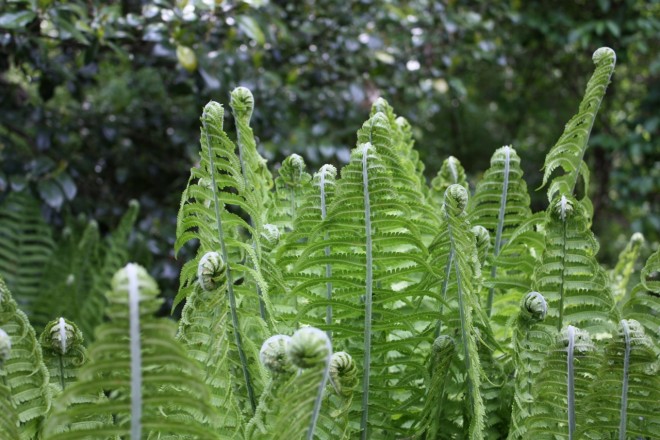 By turning over Awbury to the public, the Copes ensured that the land would remain open. Their decision was also a testament to the deeply held and fervent Quaker belief in the power of nature to elevate the human condition, the difficulty of which was increasingly apparent in their immediate surroundings. Active in a number of reform movements as well as with public parks and horticulture, their decision married the reform instinct to their love of nature.

Although documentation is sparse, it seems that until the Depression a relatively easy peace existed between the upper class Quakers and the working-class public who were allowed access to the grounds, in some places almost right up to their front doors. In keeping with longstanding Awbury tradition, fences separating family property from public land were initially eschewed, along with any kind of clear property boundaries. A police patrolman walked the grounds each day to keep order in the newly converted landscape.

By the 1930s visitation to Awbury Arboretum was peaking at 2,000 visitors a day, mostly families from the surrounding blocks. But East Germantown had become a rougher neighborhood, and increasingly frequent issues with vandalism and crime were creating strain within the remaining enclave. Fires were set on the grounds, depraved men were jailed for bothering women and children, and trees and plants were broken and stolen. The City Parks Association, hobbled by financial losses during the Depression, was unable to meet the growing need for support of the Arboretum. 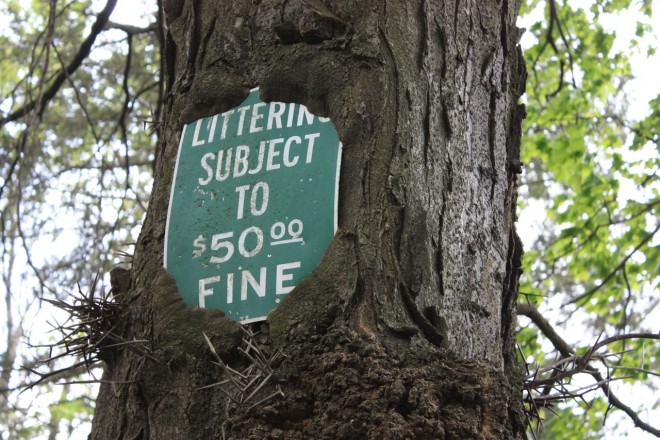 The struggle for sustainability was on. Still, the nature-reformers of Awbury, many of whom were Cope descendents, resisted the idea of curtailing access or restricting the admittance of the public. Although the WPA built stone walls around the perimeter of the Arboretum for security in 1934, regular openings were made to allow visitors to enter the grounds. Stubbornly idealistic, the residents of Awbury insisted the urban public should be encouraged to spend time in the morally uplifting environs of the arboretum.

And if they hadn’t? Awbury would likely be lost, as were the vast majority of historically or horticulturally important landscapes of Philadelphia. Awbury’s remarkable wholeness is what sets it apart from the remaining fragments that are often all we can know about the connections between long-ago Philadelphians and their surroundings.

Even more remarkable, Awbury Arboretum still exists as a free public landscape, open every day from dawn to dusk. Visitors can freely wander through the grounds that still read clearly as an English-style 19th century landscape. The simple elegance of gently mowed swales are complemented by groves of majestically canopied trees, sightlines always framing the most attractive view.

Constant in landscape, throughout the years Awbury has continuously experimented with educational and vocational programs and partnerships designed to beneficially influence the public through horticulture. Some of these, such as a job-training program for inmates in partnership with the Pennsylvania Horticultural Society and several agricultural initiatives with Penn State and Weavers Way Co-op, remain. Other programs are being revived under new leadership after several years of board and staff turnover. This includes Awbury’s outdoor youth education program, gearing up to begin summer camp to be followed by a school-year program next fall. And new initiatives are underway, including microfarming and beekeeping. “There’s no question Awbury is on an upswing,” says Mark Sellers, board chair and Awbury homeowner. “We’re figuring out how to focus on things we do well, packaged in a way that people respond to.”

Garden designer Denis Lucy, who recently came on board as landscape manager, is tasked with preserving the 55-acre tract, which relies heavily on volunteers, including several neighborhood associations, for general maintenance. This summer, working with Temple graduate students, Awbury will begin using a GPS mapping program to identify the precise location of trees and other landscape features, an important step towards creating a landscape management strategy for a site that must allocate manpower carefully. 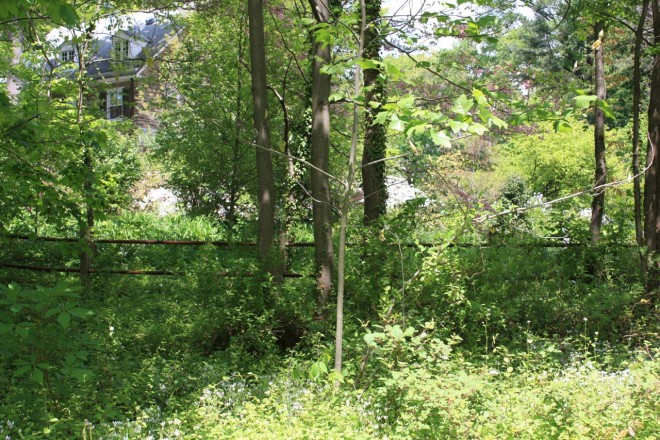 The large private fin de siècle homes designed by prominent architects are still visible through the vegetation from several places within the Arboretum. With the exception of the loss of some outbuildings and the long-containerized Wingohocking Creek, this landscape remains wonderfully whole, probably because it was conceived in simplicity of design and materials, and also because there was rarely money available to update or improve it.