A Night to Remember, Part One

Editor’s Note: We don’t usually run stories about athletic contests, let alone ones that took place in Hershey, PA 50 years ago, but this Johnny Goodtimes piece touches on such a classic slice of Philadelphiana that we decided to go for it anyway. The 1961-62 Philadelphia Warriors were a testament to Philadelphia’s greatness as a basketball town. Maybe there was something in the asphalt back then–four of its five starters were Philadelphia kids, with another Philly guy coming off the bench. And they weren’t just local, they were great. Guy Rodgers (North Philly) was a four-time NBA All Star, while Paul Arizin (South Philly), Tom Gola (Olney) and Wilt Chamberlain (Overbrook) are all in the NBA Hall of Fame. That star-studded team lost a seven game series to the Boston Celtics in the Eastern Conference Finals, and this year’s team may very well lose to the Celts in similar fashion, but the story of Wilt’s 100-point game lives on. 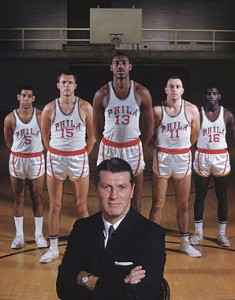 Johnny Goodtimes: There is only one man who has been with the NBA since it’s inception. There is only one man who wrote the story for the Inquirer the night Wilt scored 100 points. And there is only one man who gave us stats such as the Blocked Shot and the Triple Double. His name is Harvey Pollack, and the 90-year stat guru still has a small office at the Wells Fargo Center, where he serves as director of statistical information for the Philadelphia 76ers. He also keeps stats for the Philadelphia Wings lacrosse team, and did stats for Temple football team from the 1940s until last year. He also moonlights as an entertainment writer, penning a column called After Dark.

I walked into his office a few days ago with the plan of talking to him about the 1961-62 Warriors team that boasted 4 native Philadelphians in its starting lineup. We discussed that briefly, but the story that really made Harvey’s eyes light up was the one about Wilt’s 100 point game. It is undoubtedly his favorite story, as that game was not only the highlight of Wilt’s career, but of Harvey’s as well. At the time, he was the Sixers’ statistician, their PR director, and also a stringer for the UP (now known as the UPI), and as the game developed and history started to unfold, he was recruited to take on several more odd jobs. Here is his story of that incredible night, just over 50 years ago. 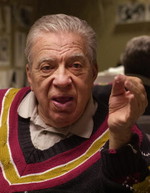 Harvey Pollack: “I should have known, the day he scored 100 points, at Hershey, Pennsylvania, on March 2, 1962, that he was going to do something that night. Why did I know? (Team owner) Eddie Gottlieb always used to take the team to Hershey before they got the expressway built. And he was always fearful that the bus was going to get stuck and they’d be late for the game, so they’d show up early. They’d arrive at five, and the game wasn’t until eight. And they used to kill time at the arcade. There was an arcade there in the building. So I go down there, and Wilt’s there. The 24-second shot clock operator is down there, and challenges Wilt to a game shooting clay pigeons. And he says, “you go first Wilt,” and Wilt doesn’t miss a thing. He knocked every single one down. And the rest of the guys are playing pinball machines. So he challenged everybody there. Now for real money. He couldn’t miss. He beat Attles, he beat Paul Arizin, he beat Tom Gola. So I should have surmised that something was going to happen that night.

Anyway, the Inquirer decided not to send a reporter to the game. I was a stringer for the United Press. So they (the Inquirer) asked me to cover the game for them. The AP gave me the same story. So there I was, I had 5 different jobs that night. I was the writer for the AP, the UP, the Inquirer, the PR director of the team, and I was the head statistician for the game. Otherwise, I had no duties. Little did I know what was going to happen. Little did I know that I was the one who would let the whole world know about this through the AP and the UP.

He had 49 points at halftime. If there was a timeout or a lull in the game, I would type something up, and my son, that game was his first paid assignment, ran the copy up to the second deck, where the Western Union was. That’s how the story was disseminated then. There were no computers. 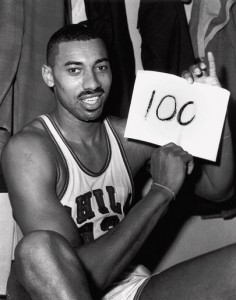 Wilt Chamberlain after his 100 point game

When he got to about 65 points, I said, “Yo Zink (to legendary 76ers announcer Dave Zinkoff), I don’t know where this guy is gonna stop tonight, but every time he scores a field goal or scores a foul, announce what number it was.” So he’d say, “Wilt with a Dipper Dunk, that’s 68 points.” So he did that right up that right up to the end. That place was in a fever pitch. As it went on, they would echo him. When he’d say 65, the whole audience would say, “Sixty-five.”

He hit the 100, and the whole crowd came out of the stands. Those that could grabbed Wilt’s arms, and they were holding his arms. Referee Willie Smith comes and hands the ball to me, and he says, “I think we should take this ball out of the game.” I said, “What is there something wrong with it?” He says, “No. I think this ball should go into the Hall of Fame.”

Now Hershey at that time was a goodie-goodie town. There was no crime. No nothing. No security at the building. But they didn’t want to leave the ball in the dressing room, with no locks on the door, because someone would steal it. So they put the balls at the press table. So I hand him another ball, we had them right under the press table, he bounces it, squeezes it, says, “It looks OK to me.” 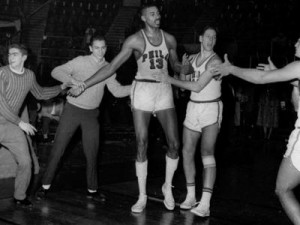 Fans on the court after Wilt Chamberlain’s 100 point game

Because the game wasn’t over yet. There was still 48 seconds to play. Now, the Knicks played with 5 guys. But Wilt didn’t play. He just stood on the side of the court with his arms stretched out like Jesus Christ. And never touched the second ball. The Knicks scored 2 more baskets. And when the game ended, Wilt dashed into the dressing room.

So first I had to get the box score done. I had to make sure that my stats and the official scorers had were identical. Then I had to write a one-paragraph lede saying Wilt Chamberlain set a new scoring record tonight with 100 points. Then I went back to the dressing room. This photographer, who was there, had seen no-one taking pictures, so he went to get his camera out of his car at halftime. He came with his son. He’s the only guy who had pictures of the game. He was back in the dressing room when I came back. And he’s standing there. And Wilt is sitting on a stool. They had no lockers there in those days. So (the photographer said) “I need to get something that shows what happened here tonight.” So I said, “Why don’t you get something that shows 100 on it?” He said, “Well what can I get?” So a guy from the Bulletin had a pad, and I said, “Give me a sheet of paper, Jim, and he ripped it off and I wrote “One-oh-oh”. 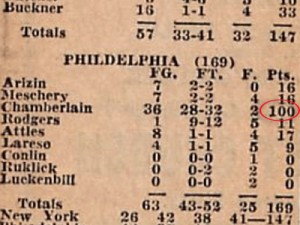 Meanwhile, everybody is signing Wilt’s ball. All the players, the owner, the stat crew. Only one person didn’t sign the ball. Me. I didn’t have time. So I went and said, “Hey Wilt, there’s only one photographer here. He wants to take a picture of you holding the ball and a sign that says 100.” So I go back and he took the picture, and the stupidest thing I ever did in life was, when he was all finished, I threw the piece of paper in the trash. But I had to get to the phone. I had to call the AP, I had to call the UP, and dictate stories. And then I had to write a story for the Inquirer. A story that ended up on Page One. But it didn’t say By Harvey Pollack” it said “Special to the Inquirer“. But don’t you think the everybody didn’t learn from me quickly that I was the author of that article (laughs). Then I come back to the room. Wilt says, “Hey Harv, can you get this ball (the 100 point ball) back to the Sheraton Hotel?” That’s where the headquarters of the Warriors was back then. He lived in New York, even though he played with the Warriors. He went back from Hershey with the Knicks. They came up in cars. He didn’t want to be sitting in the car with the Knicks and say, “Hey, I scored a hundred points on you guys and here’s the ball to prove it.” (laughs). So I gave it to the trainer and told him to put it on Eddie Gottlieb’s desk at the Sheraton.

We got in the car (to head back to Philly), and I told the driver, “The first bar we pass, I want you to stop. I’ve been under so much pressure here tonight, I need a drink.”