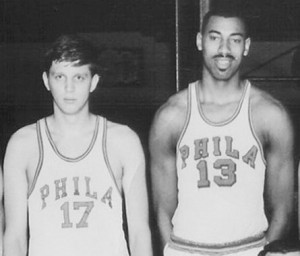 Wilt didn’t go to a local college. Eddie Gottlieb wanted him to go to Penn, so he’d be in Philadelphia’s territory, and Red Auerbach wanted him to go to Harvard, so he’d be in Boston territory. You had territorial draft picks back then. But he fooled them both. He went to Kansas, nobody’s territory, so anybody could bid for him when he came out. So Ruklik said, “A couple that was very friendly to him while he was at Kansas, he gave the ball to them.” Ruklik was white, but he was a writer for a black paper in Chicago. So I said, “Why don’t you call the people up?” He says, “I did call.” I says, “Oh yeah, well what happened?” He says they didn’t want any publicity. He said if they did that, someone would come and rob them. Not only rob the ball, but rob their house. So Rukilik told them to call him if they changed their story. So Ruklik says to me, “As soon as they call me, you’ll be the first person I call.” Well I heard from him like you heard from him. Never. Five years go by and a writer says to me, “What happened to Wilt’s ball?” I told him the story, and he says, “Why don’t you call Ruklik and see what happened?” I call Ruklik, and he says, “They never called me.” So a few more years pass. I call him again. I says, “Hey Joe. The people every call ya?” He says, “What people?” I said, “Joe, the people Wilt told you he gave the ball to.” He says, “What ball?” He denied ever telling me the story. So I thought he must be senile or something. So he came here the end of January. The Philadelphia Sports Writers had their annual dinner, and they were honoring Wilt in absentia.

So out of the blue sky, he hears about it. He says, “I want to come to your banquet. About two days before the banquet, I get a call from Rich Westcott. Ruklik wants some tickets to the game. So I get him tickets to the game. So I’m sitting in the press room, eating dinner, and Ruklik walks up, comes right over to my table, and says, “Yo Harv.” And I knew it was him because I knew his face. Somebody at the table asked him about the ball. And he came with a cock and bull story. You wouldn’t believe this story. I was ready to burst out laughing. 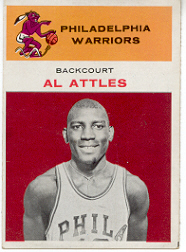 So the next person I heard had the ball was Al Attles. So I said, “How’d you get the ball, Al? He said, “Wilt gave it to me.” I said, “Well what did you do with it?’ Well he was the general manager of the Golden State Warriors at the time. He says, “It’s sitting my office right now.” I said, “Get the ball, and bring it over to the phone.” So he does and I say, “Are there signatures on the ball?” He says, “No.” I said, “Didn’t you sign that ball?” He says, “Yeah.” I said, “Well where is your signature at?” Then I said, “There should be one name on the ball. Do you see a name?” He says, “Yeah, there is a name on the ball. Walter Kennedy.” I says, “Well that’s strange. Was Walter Kennedy the commissioner of the NBA in 1962?” He says, “I don’t know.” I said, “I’ll let you know he was not the commissioner. (Maurice) Podoloff was the commissioner. So you don’t have the ball.”

So that made me decide that Wilt Chamberlain played a joke of giving out basketballs, and telling everybody he gave one to that it was the ball he scored the 100 points with.