Editor’s Note: In the world of sports memorabilia, there are two great, enduring mysteries: What happened to “The Shot Heard Round the World,” the baseball Bobby Thompson hit to beat the Brooklyn Dodgers in 1951? And what happened to the basketball from Wilt Chamberlain’s 100 point game against the New York Knicks in 1962? Legendary 76ers statistician Harvey Pollack tells the tale of the missing basketball in Part Two of his interview with Johnny Goodtimes. Click HERE for part one of the article.

Harvey Pollack: The very next night, the two teams were playing again in New York. I walk in. I don’t see the ball on the desk. Zink’s in there. I say, Hey Zink, didn’t that guy bring the ball back here.” Yeah, he brought it. Then he shows me. There was one last panel left on the ball with nothing on it. I should have signed it then! He had whited out a panel on the ball, and written, “This is the ball Wilt Chamberlain used to score 100 points on March 2, 1962 in Hershey, PA.”

The office of the Warriors was on the corner of 18th and Kennedy Boulevard. The one ball came to my hands to the equipment managers hands, into Wilt’s hands. The ball then went to the trainer, and to their office. 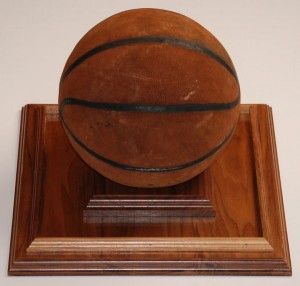 So how is it some guy in New York in 2000 says that he stole the ball out of Wilt’s hands and put it up for auction at a famous auction house called Sotheby’s? I knew it was a fake then. Right away. Then I read a story where the kid said he played with the ball outside. Now, if you’ve got a ball signed by Gola, Arizin, all those other stars, and you play on concrete, it’s all going to rub off. Anyway, so papers, all over the country ran my denial.

Arizin, Gola, the people walking along the street, all saw the ball there in the window. This was in March of ’62. In May of ’62, we lost the seventh game Series to the Celtics. Sam Jones made the winning shot at the buzzer. Eddie Gottlieb after that decided that Wilt’s salary, after the season he had, was gonna skyrocket, so he decided to sell the team. In May, he sold the team to San Francisco. He sent them every piece of information, all the stats, and pictures of players, but he didn’t send the ball. This I can’t ever get substantiated, but this is what I think happened. He called Wilt on the phone and said, “Wilt, do you want this ball or should I send it to San Francisco and they can put it on display?” I believe that Wilt said, “No. I’ll come in and get it.” But who could prove that? Now remember, this was 2000 (the year that the guy in New York was auctioning off the ball). I couldn’t ask Wilt, he died in ’99. I couldn’t ask Eddie Gottlieb, he died in ’85. I couldn’t ask Zink, he died in ’86. I couldn’t ask the ticket manager, he died around ’90. So there was nobody still alive that worked in that office except me. Now somebody won the bid with $550,000. He saw all these stories, and he called up Sotheby’s and said, “Hey did you do research on this ball? And they said, “No, we took the guy’s word for it. Why?”

Now this guy says he pulled the ball out of Wilt’s hands. Well how can he have done that? Wilt didn’t have the ball then, how can he pull it out of Wilt’s hands? So I knew he was lying right away. Now, he could have gotten the 2nd ball. But Wilt never touched that second ball. Anyway, at an auction, you have one week after an auction to put your money up. And he said, “I’ll put the money up, but if I find out this wasn’t the real ball, I’ll sue you for way more than $550,000.” So you know what they did? They called off the auction for further investigation. Three months later, they come back in the summer, put the ball back up for auction. The first time they said, “This is the ball with which Wilt Chamberlain scored 100 points. This time they said, “This was a ball that was used in the game in which Wilt scored 100 points.” So it could have been the second ball. I don’t know.