Obstacles to Widening the List of Protected Properties and Districts

Jonathan Farnham, executive director of the Commission’s staff and nominal press contact, said that over “the last several years,” only “maybe six or eight” buildings had actually been nominated internally, with most coming from “interested parties” outside the office. 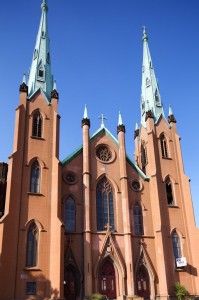 Church of the Assumption on Spring Garden Street was nominated for the Historic Register by Andrew Palewski, a neighborhood resident who owns an architectural preservation company.

In exchanges with critics, Farnham has often extolled Philadelphia’s unique ability, granted by the preservation ordinance, to allow individual citizens or organizations to nominate historic buildings or even whole districts for inclusion. But nominating buildings isn’t as easy as just picking addresses of interesting structures.

Strong applications can be over a dozen of pages long, include extensive research and photography, and typically take a month or two to complete. District nominations, including dozens or even hundreds of buildings, can literally take years to assemble.

Even then, nominations have to hold up before the Designation Committee, which reviews and recommends changes to nominations before they go before the full Commission. Drexel University political scientist Richardson Dilworth III, the board’s historian and chairman of the designation committee, said that public and political scrutiny is often the deciding factor, particularly for large districts, only 13 of which have been established since the Commission was given the power to designate entire blocks of the city in 1985. For a list of the 13 districts, 8 of them actual neighborhoods, you’ll have to scroll through the entire historic register (the list on the Historical Commission’s website is wrong).

“It takes a lot of time and energy to designate a district. You’ve got to have the councilperson on board, you’ve got to have the community,” said Dilworth, adding that the dearth of historically certified industrial properties in the city is largely a result of business owners resisting the potential restrictions and costs protection entails (the vast majority of buildings in the register are center city residences and residences in the few historic districts in outlying neighborhoods).

Dilworth also acknowledged that staff limitations played a significant part in the Committee’s review of application. As an example, he cited the proposed Spruce Hill Historic District in West Philadelphia, which has been indefinitely tabled in part because of the sheer workload its addition would have created for the staff.

“In addition to lacking the support of [Councilwoman Blackwell] and several large property owners, more generally there was a structural issue. The Historical Commission faced a real issue in terms of its resources and its ability to regulate the number of properties that would have been the register,” he said, referring to the 42 square block district proposal.

“Every time we have a designation, the question [to the staff] is, ‘Do you think you have the capacity to handle these extra properties?’,” he added.

This is the paradox of the Historical Commission: the more buildings that are added to the register, the less capacity the staff has to nominate more buildings for inclusion.

And the entire process is hampered by lack of information. There has never been a comprehensive survey of Philadelphia’s historic resources. Nominations to the historic register are made on an ad hoc basis, without any system or plan to guide them–and without coordination with citywide or district planning processes.

In short, while in theory anyone can nominate a building, it is a time-intensive process few individuals choose to take on voluntarily and which the Commission staff is often too busy to do themselves. So who submits the majority of nominations? Most come from one of Farnham’s “interested parties,” or rather “party,” the Preservation Alliance.