PART ONE OF A BROKEN SYSTEM: UNDERFUNDED AND INCAPACITATED, BY RYAN BRIGGS 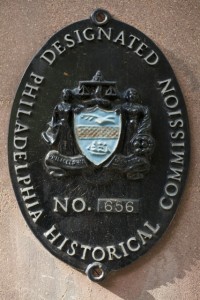 The name “Historical Commission” specifically refers to a board comprised of 14 members, eight nominated by the mayor and six by various municipal department heads created in 1955 by city ordinance with the power to designate individual properties and later entire districts of the city as historic. Board members are paid $40 per meeting and generally convene once per month. The Commission’s work is supported by a small staff of professional preservation planners.

Historic preservation laws in Philadelphia are actually quite strong, nominally preventing demolition or even noticeable alteration of designated structures. This is much more protection than offered by federal or state historic registers, which merely prevent government money from assisting in demolition.

The problem is that the Commission’s board exists mainly to approve historic designations and mull alterations or demolition permitting, but not to actually nominate additional buildings for historic status. In theory, seeking out historically significant structures and nominating them for protection would fall to the trained historical preservationists in the employ of the Commission. However, like most ordinances, there were no requirements for funding or staffing, and as a city function it’s been given short shrift by City Council and the Mayor for decades, rarely exceeding its present budget. 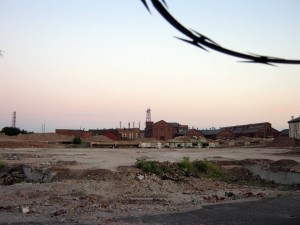 More than a dozen historic buildings at the Frankford Arsenal have been demolished over the past three years | Photo: Rachel Hildebrandt

And indeed there have been a number of eyebrow-raising demolitions in recent years, most of which were perfectly legal because buildings had simply not been added to the city’s list of protected properties, its historic register, which nominally protects buildings from being torn down. But, given an annual budget of just $385,995, if anything it is surprising there have not been more losses. (As a comparison, the city’s allocation to the Mural Arts Program, underfunded itself, is $1,000,000.)

While a handful of City Council members–most notably Bill Green–have raised historic preservation considerations in council, most are at best ambivalent and at worst, openly hostile to the agency. Councilwoman Jannie Blackwell even attempted to totally strip the Historical Commission of its designation powers in 2002.

One need only pay the Commission’s offices a visit to understand how little priority is given to preservation in Philadelphia. Perched in a tiny space on the fourth floor of City Hall, visitors are greeted by a small bell and sign with instructions to ring for assistance. Ringing the bell summons one of only six full-time staff members who support the Commission itself–there is no receptionist here.

Cubicles and closet-sized offices are punctuated with broken chunks of cornices and other building-sized adornments snatched from the rubble of destroyed buildings. The outwardly playful decorations seem a macabre and certainly melancholic reminder of what is at stake–or a memorial of the agency’s past failings.

With a staff limited in size by the small budget, workloads have to be prioritized. Research and fieldwork toward the nomination of new buildings or historic districts for inclusion on the registry, raising awareness about the nomination process, lobbying and other political advocacy, developing proactive and creative policy, technological solutions, interactivity (the Commission’s website is woefully old school and out of date and the Philadelphia register is a static, unsearchable list), and reassessing preservation priority-making is all forced to take a permanent backseat to the Historical Commission’s legally mandated obligation to respond to the requests for alterations to buildings already on the register within 60 days of submission.

With some 12,000 of the city’s 600,000 properties on the historic register already and “alteration” meaning anything from changing out a door or window up to demolishing a building, some years see thousands of minor requests submitted to the Commission. The board’s monthly meetings are insufficient to respond to so many applications within the 60 day limit, and some 90 percent of these smaller items are handed to staff members, according to a Commission staff member we spoke with. The same source said the majority of the office’s five preservation planner’s time was consumed with responding to minor permitting requests and monitoring violations of historic preservation codes, not nominating new buildings or districts for inclusion on the historic register.