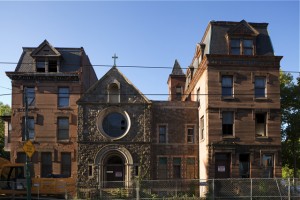 Interviews with a wide array of people involved in historic preservation in Philadelphia reveal a strong sense that the system is broken. The consequences of the broken system are clear, and brutal enough: a steady stream of demolition of architecturally noteworthy and historically significant buildings in every part of the city, the loss of urban fabric, scale, memory, and property value. And beyond all that, wasted opportunities to build on, adapt, reuse, and refabricate a truly wonderful and variegated urban form, to meld it with contemporary uses, designs, and materials, and in doing so to elevate ourselves and our humanity.

Since the launch of the Hidden City Daily last September, we have covered dozens of lost or threatened buildings, destroyed by fire or neglect or administrative error (in fact each case has very different circumstances). The Monastery of St Claire, St. Boniface Church, the Stephen Smith home, Buck Hosiery, Cramp Shipyard, Frankford Arsenal, Edison High School: there were so many significant losses in 2011, we had to present them in two separate photo essays, HERE and HERE.

This is a crisis that will only worsen in the coming two years, with dozens of churches, schools, and factories–the very buildings that lend our neighborhoods scale and identity–about to be deactivated and left to the will of the shaky market.

There are numerous reasons why a building might be lost. The practice of preservation, indeed of urban development in general, is complex and complicated, involving a diverse set of actors–from advocates to bankers to community members. But we’ve started our reporting, which was conducted chiefly by Ryan Briggs, where the rubber meets the road, with the one government agency legally tasked with protecting buildings of significance: the Philadelphia Historical Commission. Within the limitations of their budget and staff they do an heroic job safeguarding buildings, and yet because of their paltry budget and because of the general disregard for preservation among elected officials, the Commission is barely able to manage oversight for the buildings on Philadelphia’s list of protected properties and in its few historic districts, it can’t add either new buildings (or types of buildings) or districts in any fundamentally effective way, and it can’t provide the inspiration or impetus for city residents and policy makers to use preservation as a mechanism for community and economic development. 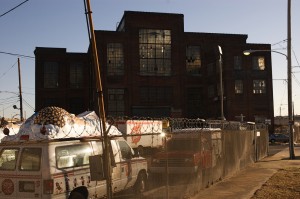 Ask almost anyone involved in historic preservation in this city of history and they will tell you the point of preservation is not to embalm the city in any particular historic moment, theme, or style, but to put all that inherited wealth to work for us today, to create a more interesting, lively, economically vital, and yes, marketable city. And yet, as we have learned following crisis after crisis as building after building is threatened or lost, the system for meeting this goal is shot, worn thin by lack of funding, political interest, and NIMBYism.

This leaves enormous swaths of the city, including architectural wonderplaces like Germantown and West Philadelphia–and wide categories of buildings–without the protection that a rigorous preservation system should offer. And without a municipal culture innovative enough to see preservation as a systemic catalyst for neighborhood development, in the way previous generations viewed Society Hill, there is little reason to hope that the status quo is going to change.

Our Investigation In Context
However, historic preservation as a discipline is changing. Here in Philadelphia, the work of the city’s chief preservation advocate, the Preservation Alliance of Greater Philadelphia, is expanding the very idea and practice of preservation from the protection of buildings designed by noteworthy architects of other times to the proactive and neighborhood based process of identifying sites of cultural importance. The Alliance is also pushing a “thematic” historic district to cover, for the first time, in this city of work, the wilting collection of 19th century textile mills. The Pew Center for Arts and Heritage is sponsoring a thought experiment called “Gray Area” meant to exploit the questions in the field of preservation about what makes a building significant, what it means to preserve it, and what exactly we mean to preserve. 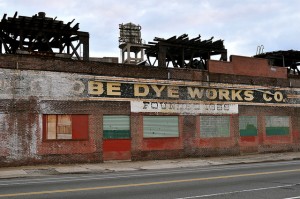 In actuality, quite a lot of preservation–the reuse and adaptation of old buildings for contemporary uses–happens every day in Philadelphia. Most of us live in old buildings, after all. In Kensington, the folks from 3RD Ward are nearing completion of the wonderful renovation of a set of buildings; in Frankford, the Globe Dye partners are quietly (re)turning that complex into an economic machine (in part by engaging contemporary designers); in West Philly, the folks from the non-profit ACHIEVEability have lovingly renovated the 1912 Von Louhr California Mission-style apartment building, which sought to prove the viability of apartment living in the city of homes. But these projects proceed entirely on an ad hoc basis. And the fact remains that for every Globe Dye there is a handful of Buck Hosieries.

What Our Investigation Reveals
Our reporting on the Philadelphia Historical Commission, the agency created to be the chief custodian of the city’s architectural past, reveals a department that has been enfeebled by underfunding and overwhelmed with responsibilities. Our exploration of preservation cases in action reveals a system that’s fairly easy to exploit and often manipulated by provincial neighborhood interests. Our research into the practices of peer cities reveals ways we could do substantially better and methods we can adapt going forward.

In this two part series, which will run today and tomorrow, the Hidden City Daily will first outline how historic preservation efforts have manifested themselves in Philadelphia’s municipal government, examine both successes and failures of that system in its efforts to proactively guard significant buildings and places, and compare Philadelphia’s methods to neighboring East Coast cities. Part two will investigate cracks in the system of protection and the legal difficulties involved in protecting even historically certified structures.

Click PAGE 2 below to advance to Part One of the story.