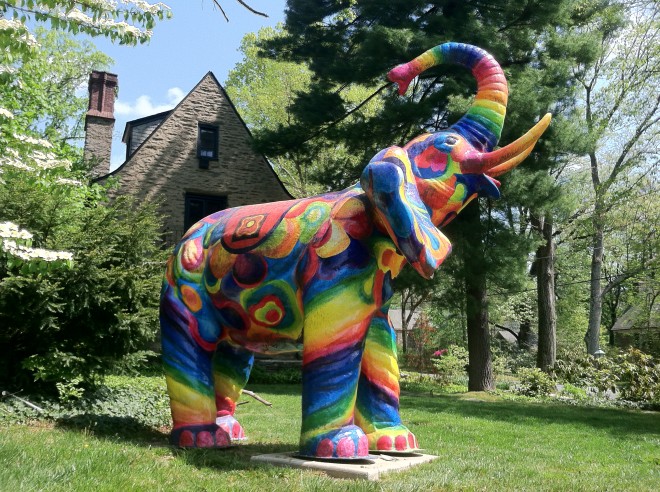 On the northern corner of West Mount Airy Avenue & Greene Street in West Mount Airy, a multi-colored fiberglass elephant stands triumphantly on the side lawn of a private residence. The colorful beast remains a local attraction, standing out so clearly from its setting of stately granite homes and shaded, uncongested streets.

The elephant, however, is but one remnant of a larger effort to juxtapose zoology with urbanity. For six weeks in the autumn of 2006, the public art exhibit “AbZOOlutely Chestnut Hill” featured 50 such painted fiberglass animals along Germantown Avenue. There was certainly little conceptually innovative by this display, with the international “CowParade” and the Main Line’s “Art Unleashed” as clear antecedents. Yet several prominent architectural firms sponsored pieces, enough to elicit some additional publicity.

The subsequent raffle, auction, and sale supported the Chestnut Hill Community Fund, the Philadelphia Zoo, as well as the beatification and preservation of the Chestnut Hill District, which had conceived of the series. The figures were mostly purchased by various businesses (only some of which continue to be on public display), while others, like the elephant in question, were snatched up by private individuals.

For photos taken of the 2006 public exhibit on Germantown Avenue, see a Flickr album HERE.