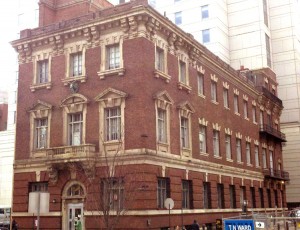 If Philadelphia buildings were contestants in a season of Survivor, this building would make it to the final Tribal Council. Built to compliment one of the city’s finest neighborhoods, it ended up spending most of its life surrounded by blight. While literally everything around it has met the wrecking ball, this beast has managed to outwit, outplay, and outlast all of its competition.

The Benevolent and Paternal Order of Elks began their Philadelphia Lodge on February 19, 1871, only a week after the NYC Lodge officially started (both lodges had been around for three years under various other club names). The Philadelphia lodge was the second ever Elks Lodge. It was named B.P.O.E. Lodge B, because they never envisioned having more than 26 lodges. In 1881, it was renamed B.P.O.E. Lodge #2.

The first nine members of the Philadelphia Elks Lodge were members from the New York Lodge #1. Like all the first Elks, they were actors and performers that formed the club in order to get drunk outside normal tavern hours. These men set up a small Clubhouse/Wastoid Den on the second floor of a long lost building at 10th and Chestnut Streets, above a restaurant called Finelli’s. Better than the house near 10th and Sansom they had used under previous club names, it would be the home to the Philadelphia Elks for 13 years. After that, the Philadelphia B.P.O.E. moved often: first to 11th and Chestnut then to another building on the same corner four years later then, in November, 1889, to new digs at 232 North 9th Street. 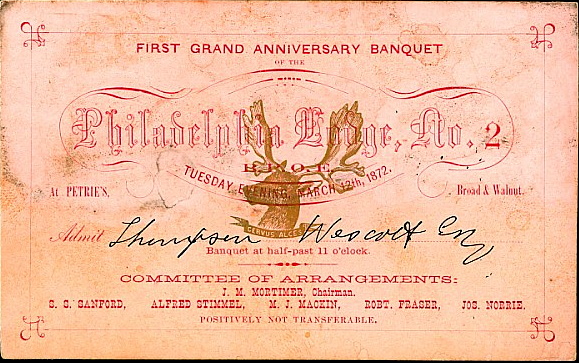 Ticket to the one year anniversary bash of the Philadelphia Elks Lodge, to be held at a place called “Petries” at Broad and Walnut.

Over the next decade, membership in fraternal organizations made a resurgence after a long slump. No longer just a club for drunk and transient minstrels and vaudevillians, the now respectable Philadelphia lodge’s membership ballooned from 165 to 345, making their 9th Street rowhouse-sized building way too cramped. The Elks moved over to a temporary quarters at 1609 Arch Street while membership continued to grow. It became clear that a new and MUCH larger building would be needed. In 1903, the Elks held a design competition for a grand new building that would be constructed at 1320 Arch Street, the Southwest corner of Arch and Juniper Streets. The budget was $200,000, $11.5 million in today’s dollars. 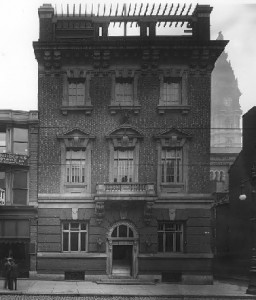 In the decades before the move, the area just northeast of the yet-to-be-built City Hall was one of the most opulent in the city. Around the turn of the 20th century, the residential neighborhood became home of the city’s great gentleman’s clubs and secret societies. The Freemasons, the Oddfellows, the Scottish Ritists, and the St. Georgians all made a presence there. The Elks, coming to Arch and Juniper, would be one of the last to arrive. All of the best architecture firms from the period submitted ideas for what would be one of the finest Elk mega-lodges in America. The winner of the competition was the firm of Caldwell and Simon.

The Elks spared no expense in the creation of the B.P.O.E. French Renaissance Super-Fortress. It boasted walls of Sayer and Fisher brick, Indiana limestone facade details with terra cotta trimmings, one of the finest dining rooms in the city, and a roof garden (and you thought roofdecks were a new thing!). Construction began in 1904 and the building was officially dedicated April 17th, 1906. The project came in way under budget at $60,000.

The dedication was such a huge raging party that it practically took over the city. Hundreds of Elks from far and wide came to see the new building. This was nothing compared to the party a year later, when the new Philadelphia Lodge building became the centerpiece of the Elks’ national convention in 1907. The Elks became more popular than ever and membership skyrocketed. The new lodge was already too small for the Elks’ needs by 1922, only 14 years after it opened. In 1925, Lodge #2 moved over to their MUCH larger new digs at North Broad and Wood Streets, but kept ownership of the Juniper and Arch building.

But ten years on, at the height of the Depression, the glory days were over. Membership declined with the economy. The Elks sold off their large building on North Broad and moved back to the old Arch and Juniper lodge. By this point, the neighborhood around the lodge was in a pretty sorry state. The area was filled with noisy industrial buildings, blighted old houses, and vacant lots. Membership continued to decline over the next two decades. Finally, in 1963, the Elks were forced to sell the building. The Philadelphia chapter went defunct in 1979. The old lodge became an intake center for the homeless and then became the Salvation Army’s Eliza Shirley Woman’s Shelter, the same function it serves today. 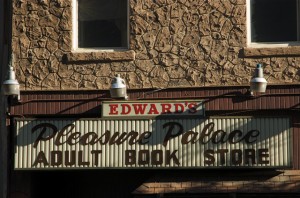 By the 1980s, the area wasn’t just rundown, it was seedy, with dive bars, strip clubs and sex shops, most notably Doc Johnson’s, a peep show palace that would eventually be converted into lofts with a Citibank branch on the ground floor. In 1985, the city announced plans for a new Criminal Justice Center that would be built on the entire block bounded by 13th, Juniper, Arch, and Filbert Streets. It would be 520 feet tall and require demolition of all the structures within that block, which included the old Elk’s Lodge. Preservationists went nuts, especially after seeing the old Evening Bulletin, Essex Hotel, and Frankel Buildings go down right after the project was announced. The city’s preservation ordinance went into effect in April 1985, partially inspired by the loss of those buildings. The Elk’s Lodge was historically certified on July 30th, 1985, blocking the permit for its demolition. It would be the only building on the square block for the next decade. 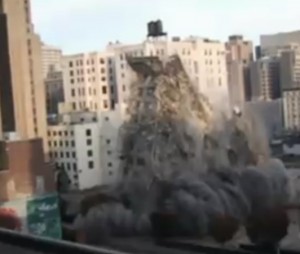 The Elks Club, in the lower left, observes the demolition of the Keystone Building directly across the street in 2007.

The area started getting cleaned up in the early-1990s thanks to the construction of the Pennsylvania Convention Center. The Criminal Justice Center ended up getting built a whole decade late, 461 feet tall and only taking up half the block. Then, in the late 2000s, Pennsylvania Convention Center Expansion brought empty lots and controlled demolitions to the neighborhood. After all of that upheaval, there’s only one empty lot left on the block today–what was the Frankel Building next to the Lodge.

Even in its current dilapidated state, this building is still a stunning beauty. Its just a matter of time until this building will be restored and repurposed. Hopefully, the city will give up on the empty lot next door and the 1300 block of Arch will be able to rise to prominence again.