Look up. At the rooflines of many Philadelphia buildings is a band of rich decoration called a cornice. While many cornices are meant to appear to be sculpted out of wood or stone, the majority are actually made of stamped sheet metal. This illusion was a point of pride for cornice manufacturers, one of which boasted in 1900 (century-old spelling intact) that “Practicaly anything that can be done in wood, stone or brick can be duplicated in metal without losing any of the charicter or effect of the work.” 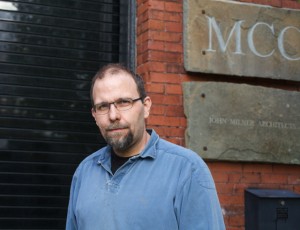 Most of this metalwork is either galvanized (zinc-coated) steel or tinplate, which is iron coated with tin. More rarely, copper or lead were used. Sheet metal was also used to build whole facades and elaborate windows. Philadelphia has a wealth of this metalwork, dating from the late 19th and early 20th centuries, but much of it has deteriorated or disappeared. To learn more about this vanishing art form we spoke with metal conservator Adam Jenkins, of Materials Conservation Collaborative, LLC. He is one of only a handful of conservators in the region with the know-how and skill to repair these pieces.

John Vidumsky: I always called it a tin cornice, but it’s not actually tin, is it?
Adam Jenkins: It’s galvanized steel. Or iron with a coat of tin. Tinned iron goes back centuries.  Galvanizing is more of a late 19th, early 20th century thing. The galvanization is there to keep the ferrous metal, the iron, from rusting. You put a non-ferrous metal (like tin or zinc) on top of ferrous metal, and the non-ferrous metal corrodes sacrificially.

JV:Once you start to notice the cornices it seems like you see them everywhere. You start to be amazed by the variety.
AJ: The best advice I got when I moved to Philadelphia is “look up.” On my street they’re all different and they’re all great. There are some of them that are wood. But a lot of these are designed to look like carved wood. It was cheaper, you stamp it out and you hang it up. 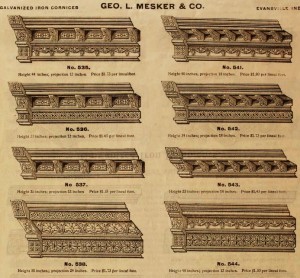 JV: Do they have any purpose besides decoration?
AJ: I think fundamentally it’s decorative. In some houses it’s part of the structural airspace, to allow for expansion and contraction.

JV: What did you call the people who did this work?
AJ: They were probably called tinsmiths, or sheet metal workers. It’s possible that there was some overlap in terms of who did it. If you’re talking about tinned iron, you could also be talking about galvanized steel.

JV: It seems like we don’t even know how to talk about it anymore.
AJ: I think the architectural terms still exist, you can say cornice, etc., but when you’re talking about pressed metal or tin or copper-work it can all mean different things, the meanings can all be interchangeable. What do you call these individual sheets, sheets of cladding? But how do you refer to the windows? What are the attachment points like? The vocabulary is not solid and it’s not entirely clear what you’re talking about when you’re looking at these. 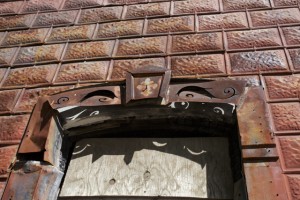 JV: It’s kind of a lost art, isn’t it?
AJ: I don’t think it’s a lost art, there’s people out there that do it. It’s just not economically viable. I chased down a few instances where they’re doing this kind of work on a large scale, repairing cornices in Chicago and New York.

JV: It seems like a lot of the metalwork in Philadelphia could use some repair.
AJ: My experience with these things is that a lot of them rust right in the dead center of the panel, where the zinc has eroded away. As soon as it erodes away enough, you get these areas of red rust. It eats through and you get Swiss cheese. 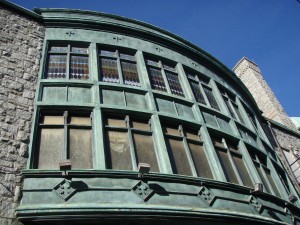 JV: As a conservator, how would you intervene in a situation like that?
AJ: Conservators are people who equally with their head and their hands. They get to really think about the structure of things, to tear them down intellectually and put them back together again. And come up with the best solution for preserving something with minimal impact on the art. The whole idea of what we do is reversibility. Not to interact, not to change too much of what’s there. The ideal situation is that we stabilize it where it is. I used to say that we’re trying to upset entropy. But it doesn’t really work. Entropy is having its way with us right now.

JV: Is there a built-in lifespan for architectural sheet metal?
AJ: It’s like anything metal. If you keep it protected from the elements, it’s going to last as long as it’s maintained. Keep it painted. 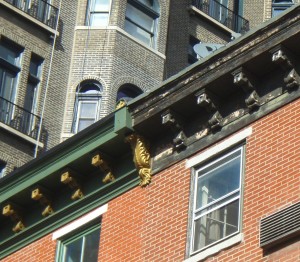 JV: If you want to replace or repair your cornice, how would you do that?
AJ: There are a couple of places in the country where they still have the skills, the know-how and the equipment to replace it. We will take a section of yours and figure out how to stamp it. If we’re going to do a large expanse of this stuff, we need an intact master. If it’s all Swiss cheese, we need to clay it up and re-sculpt those areas. That’s where the time is.

JV: How do you make the master?
AJ: From the original, there are several ways. The fastest way would be to make a rubber mold, cast into that with some material that is refractory and use that to make a sand mold or some other kind of shell mold. And we would send it out to be cast (into a die.) For this, I would find a tool and die manufacturer. The precision would have to be there. We also have to be able to calculate for the thickness of the metal. If you’ve got two plates that have to come together, they need to match front-to-back. 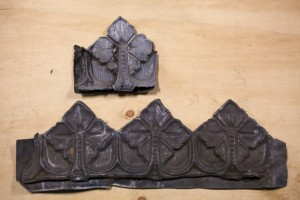 JV: Can you show us an example?
AJ: This is lead cladding. It was a sleeping porch, where the entire porch was clad in lead. The lead itself is in relatively good condition. The problem is that moisture got behind it and the structure disintegrated. So we had to take the cladding off and rebuild the structure.