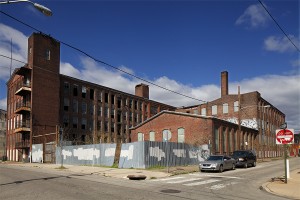 Neighbors’ expectations were high when the building was purchased by investors Yechiel and Michael Lichtenstein of the Brooklyn-based YML Realty Holdings in 2009. It was the latest purchase for two men who had slowly amassed a small real estate empire throughout Philadelphia and New York City.

“They came before the zoning committee with a plan for I think 82 live/work units. I think people were pleased to see that kind of development,” said Jeff Carpineta, president of the East Kensington Neighborhood Association. “That building…it’s like the white elephant of this neighborhood.”

The Lichtensteins won support from EKNA and swift approval from the Zoning Board of Adjustments, said Carpineta. And then, more of the same: silence. 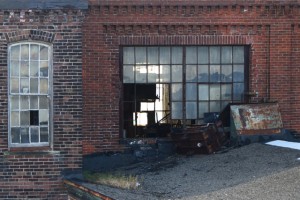 Three years later and the building has scarcely been touched, continuing to suffer from increasing dilapidation and chronic break-ins. Carpineta fears that arson might claim the building, like similar structures that have burned in recent years.

In a neighborhood that has seen several mills converted into functioning residences and businesses, many in the neighborhood see similar possibilities for the Buck Hosiery building. “Giant buildings like this one represent a huge opportunity to build a diverse economy in our neighborhood,” said Henry Pyatt from the New Kensington CDC, a non-profit that coordinates planning and economic development in the area.

But the building has become more burden than boon as it has fallen into increasing disrepair. “Oh, it looks like crap and it’s the first thing you see when you get off the El,” he said. It’s an awful introduction to the neighborhood.”

“If this one goes its a huge piece of our history and it’s a shame they can’t make something work with all the artists and development in the area,” said Carpineta.

The 1800 block of East York Street hummed with industrial activity for more than a century. According to Bromley’s Atlas of Philadelphia, the lot was a greenfield into the 1860s, by 1875 it had been subdivided into homes, a small carpet mill, and a dyeworks. By 1910, the atlas depicts a block dominated by Buck Hosiery. 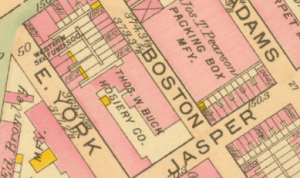 Carpineta says copper vandals have already breached the building, which is not illuminated at night. Trash frequently accumulates around the premises and is cleaned by EKNA. “We’re frustrated because that building should be one of the greatest things in the neighborhood and instead it’s one of the scariest.”

Attempts by neighborhood leaders to contact the owners have gone nowhere. “We sent a letter to the owner’s address, to send a message to them that we weren’t really happy with the condition of the building or that we were cleaning up their mess,” said Carpineta.

They never received a response.

According to the Office of Property Assessment, 1817 East York was purchased by “York Street Property Development,” one of a number of LLCs used by the Lichtensteins while acquiring property in the city. The listed mailing address corresponds to the law offices of Walder and Zaslow in Langhorne, PA, a firm that represents them in real estate matters.

Buried behind LLCs, Lichtenstein’s primary contact number is only listed on court documents. It leads to the offices of Hamodia, a non-profit, daily Jewish newspaper in Brooklyn, where YML Holdings is apparently headquartered.

Reached over the phone, Michael Lichtenstein said the Thomas Buck project is “stuck,” and was quick to cite the poor economy and lack of funds needed to continue the project.

“There are at least 200 development projects in Philadelphia, if not 500, that are stuck because of the economy, and this is just another one. If you can invest money and bring a couple million dollars, that would be great,” he said.

There is no doubt that the men have had financial problems. After defaulting on a series of mortgages in 2010, according to court documents, City National Bank initiated foreclosure proceedings on the higher profile “Thomas Lofts” on the 700 block of Market Street.

Asked if the York Street property was for sale, Lichtenstein said cryptically, “We’re working it out, that’s that.” The building has no visible for sale sign, and did not appear to otherwise be on the public market.

YML owes $60,000 dollars in unpaid property tax and multiple liens that have accumulated on the property over the years, according to the Office of Property Assessment. 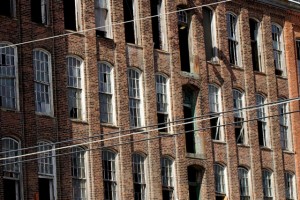 Lichtenstein acknowledged that he was the person responsible for tax payments, but when asked about back taxes on the property, he laughed and said he “couldn’t remember.” Later, he said, “as far I know, the taxes are being paid.” Asked who was responsible locally for managing and maintaining the building, Lichtenstein said he “didn’t know,” but was sure “the building is being kept up.”

Lichtenstein became increasingly agitated during questioning about the property.

“If you want to invest something productive, like bring money or help in development that would be greatly appreciated. If you want to just ask questions, then buzz off,” he said, before hanging up.

Over the years, the city has filed dozens claims against both men and their various LLCs for failure to pay Business Privilege Tax, water and sewage rents and property tax, and building code violations, according to court records.

In virtually every instance, the men failed to appear and claims simply continued to accumulate. It is another reminder that in spite of Mayor Nutter’s recent claims of “cracking down” on tax cheats and deadbeat landowners, many continue to slip through the cracks.

While the developer claims he is merely waiting for more investors to continue the project, Michael Lichtenstein is an elusive figure.

It seems more likely that Lichtenstein is hoping, perhaps like the owners of the hundreds of other “stuck” projects he alluded to, to sit on this land, ignoring taxes and building codes, until property values naturally increase. It’s a lot easier than actually developing the building, and if you ignore the law, it won’t cost a thing.