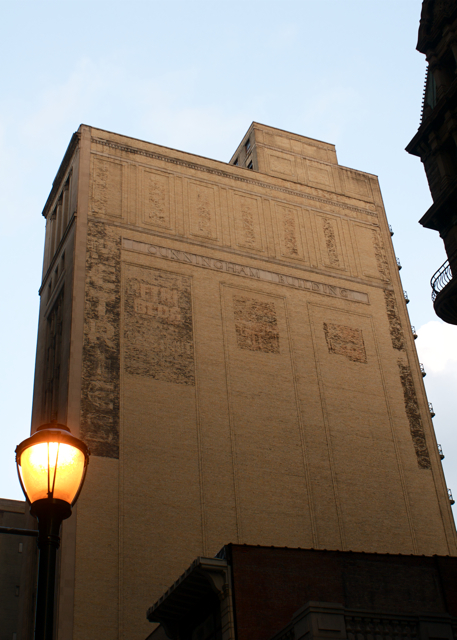 This is definitely not your typical building. Exactly 57,720 square feet of floor space packed into a 38′ x 103′ lot. Such a small footprint leaves you with a thin building that appears to touch the sky. Yet it’s only 15 stories. This multiple world-record-breaking tower–better known as the Cunningham Piano building–is awe inspiring. Hell, for me it’s damn near a religious experience.

Irish immigrant Patrick J. Cunningham started his famous piano company in 1891. Like every other piano company of the period, the Cunningham Piano Company set up a showroom on Chestnut East, back when it was known as “Piano Row.” The original Piano Row was confined to the 1100 block of Chestnut, but like Jeweler’s Row, expanded to surrounding streets. At its peak–man, there must have been a piano in every proper rowhouse, from Fairmount to Swampoodle!–Piano Row had 13 piano companies spanning Chestnut Street from 6th to 23rd, with most of them in the 1100-1300 blocks.

Two decades after opening, business was going so well for Cunningham at its 1105 Chestnut location that more space was sorely needed. In 1913, P.J. Cunningham bought 1312 and 1314 Chestnut Street, twin mansions-turned-offices known as the Irwin Estate, with the intention of building a $1 million dollar 12-story warehouse. They sat on the property for nine years. Then on November 14th, 1922 the company announced that the new building at 1312 Chestnut would be dedicated to offices and sales, bumping the project up to a $1.5 million dollar 15-story tower. 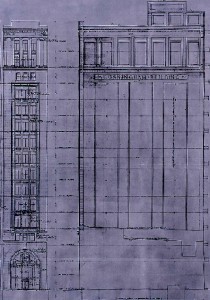 The blueprints drawn by A. J. Sauer. | Source: Athenaeum of Philadelphia.

Cunningham commissioned the the architecture firm of Andrew J. Sauer and they knocked it out of the park. Not only did they give it a beautiful slender facade from top to bottom, but actually gave it a brick facade for the exposed party walls as well. These unusual facades, consisting of western Pennsylvania brick, pushed the project’s price tag up to $2 million. Ground was broken on February 1st, 1923 and the company moved in on June 3rd, 1924. The fireproof building was billed as one of the tallest buildings East of Broad Street dedicated to one company. The fancy side facades were said to withstand 120mph winds.

At the time, buildings usually had their name or occupying company painted in gigantic letters along their exposed party walls. The Cunningham Building, despite having side facades that included the building’s name, was no exception. Only a few years after the building was completed, the building’s name was painted no less than three times on each side, along with an advertising slogan and  images of pianos the company produced. As if that wasn’t enough, “CUNNINGHAM” was also emblazoned in brass on the sidewalk in front (long gone).

Sales were outstanding throughout the 1920s, especially when Cunningham secured itself as the industry standard for player pianos. But the Great Depression hit the business hard, forcing the company to give up on its illustrious office and sales tower and move to other quarters. In 1936, the building was rented out to Petrie’s, a New York based woman’s wear chain. $135,000 of alterations were done to accommodate the new tenant. Among the changes were new side facade signs that covered the Cunningham ones. 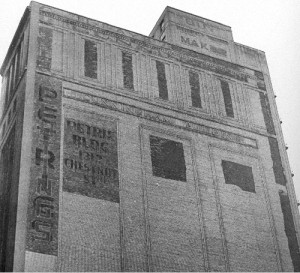 Petrie’s only stayed for a short time until the building was purchased in 1938 by the Anthony H. Geuting Company, a shoe manufacturer and seller. They’d had a store on the 1200 block of Chestnut since 1919 and were eager to expand, moving into the first 10 floors of the building and leasing the top five to other companies. Geuting’s was billed as the world’s largest shoe store when it opened in January of 1939. Yet again, another side facade sign was painted over the old ones. On February 1st, 1952, A. H. Geuting sold the shoe store but retained ownership of the old Cunningham Building–leasing it to others for the next 20 years.

In 1973, the property was purchased by the UK-based Corris Properties, who held it all the way up to 1998, when PMC Investments bought the place for $1 million. PMC moved their worldwide chemicals and plastics concern from their previous location in Ardmore and altered the facade to declare their presence. The building still says “PMC Group Building” on the front  to this day. In 2001, only a few years later, Tony Goldman, Messiah of 13th Street, bought the building for $2.45 million. PMC moved to Mt. Laurel, New Jersey. 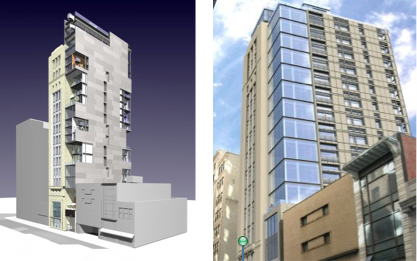 Goldman wanted to turn the place into condos. In early 2005, he spent 900 G’s on 1316 Chestnut, the single story retail box next door, presumably to make room for the addition. He commissioned two architecture firms, Brett Webber Architects and Erdy-McHenry Architecture, to create separate plans for the building, both of which called for building onto the historic party wall, Cunningham’s best feature. E-M’s plan, featured in last year’s Gray Area preservation initiative, was born from what they called a “host-parasite” typology. Their addition, which would have preserved but also visually obliterated much of the party wall, would have reengaged the original core of the now obsolete office building, also strengthening it to withstand seismic activity.

But on June 15th, 2007, at the very peak of the boom, in an event that perhaps no one predicted, Goldman sold the tower and retail box to the Church of Scientology for a cool 7.8 mil. The good ol’ Cunningham Building would now set another world record…it would be the tallest building in the Church of Scientology. This event made headlines, pushing the tower into a limelight it had not had since it opened. Some people balked at the idea of the structure having this kind of use, but at least SOMEONE was seeing the value of A. J. Sauer’s masterwork.

Five years since the sale, despite plans, no alterations have been completed. Proposed alterations of the building, though extensive, still keep the original exterior relatively intact. One rendering even has a vertical sign on the side saying “SCIENTOLOGY”, hearkening back to the old timey party wall signs.

Hopefully, they’ll get the renovations going some time soon–and I mean very soon. The Cunningham Building has been disrespected enough by neglect. It deserves to be put back in use. Eleven years of sitting empty is never good for a building. I don’t care who will be the one to do it… just get it done already.