On Buck Owners: “It Was All A Great Swindle” 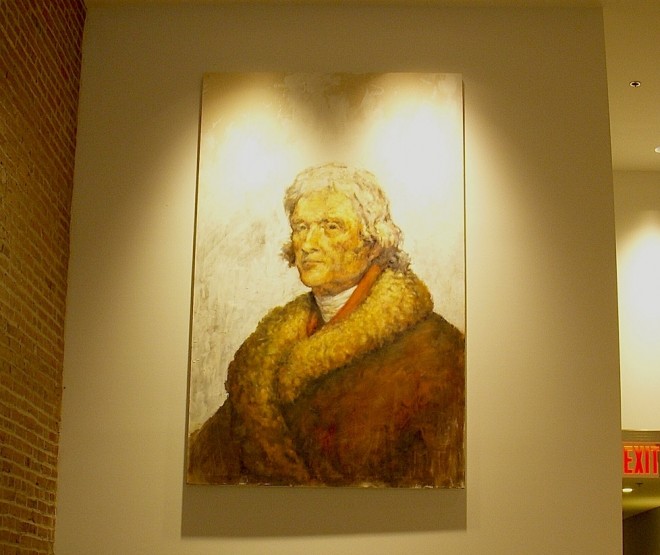 He attracted an unlikely art fan: Michael Lichtenstein, owner of the now destroyed Thomas Buck Hosiery building. Through their relationship, Tomezsko would become one of the last people to be inside the Buck building with its wayward owner.

At the time of their meeting, Lichtenstein was working on the Thomas Lofts condo project at 726 Market Street and thought Tomezsko’s painting style would be a perfect for a mural of Thomas Jefferson he envisioned in the lobby of the building.

Tomezsko had recently graduated from Tyler School of Art at Temple University and was hungry for commissions. He says the two made a “handshake deal,” a decision he now regrets.

“I offered to do a mural for $1200, which is already really low for a painting of that size,” said Tomezsko. Lichtenstein instead agreed to pay him $800 and provide the use of part of the Thomas Lofts building as temporary studio space.

He completed the painting and for a short time was able to use part of the Thomas Lofts building for his work. In Tomezsko’s mind, this was compensation for the reduced price of the painting.

Predictably, he was soon pushed out of the informal studio he had set up. “Lichtenstein said, ‘You need to move out of this space, a restaurant is moving in’,” Tomezsko recalled. But Lichtenstein still had plans for Tomezsko.

“He said, ‘in exchange for all the work you did I’ll show you this property in Kensington,’ and he said I could use that as an art commune or something.”

In Spring of 2010, Lichtenstein arranged a meeting with Tomezsko at the Buck Hosiery building.

Tomezsko had worked under his father, an architect, and had an eye for structural deficiencies, but said anyone could see the building was dangerous. He described being led into a seemingly unsecured building with “holes from the floor through to the roof” and “combustible materials” strewn around with garbage and industrial equipment. There was also ample evidence, like bedding and recently opened containers of food, that people had been living in the building.

“I’m not sure if he’s trying to use this as a defense now, that he didn’t know what was going on there, but, I was actually inside with him, and he was commenting on the state of the building. He was definitely well aware of the shape it was in,” Tomezsko said.

But Lichtenstein didn’t bring the young artist there to replace the space he’d lost in the condo building. He told Tomezsko he would let him rent the building–so long as Tomezsko did renovation work entirely out of his own pocket and kept squatters out of the building. After being offered the building for “an insane price, like $2,000 a month,” Tomezsko walked away from the dubious possibility of paying for the privilege of renovating Lichtenstein’s building.

Tomezsko admits he was naive in starting work without a written contract. Lichtenstein was free to bend their agreement at will. “I maybe received five or six hundred dollars from him,” he said. “All I wanted was a paycheck and a place to work.”

“It was basically all a great swindle,” he added.