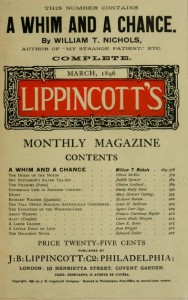 In March of 1896, Philadelphia’s Lippincott Magazine first published Louis Sullivan’s essay “The Tall Office Building Artistically Considered.” Famous for its credo that “form ever follows function,” Sullivan’s essay was a declaration of architectural independence as steeped in the ethos of American promise as anything ever uttered by Thoreau, Whitman, or Lincoln. In it, Sullivan derides the “proper” architecture of European mimicry practiced in most American offices and calls instead for an architectural artistry rooted in honest self-determination. That it was first published in Philadelphia, the city which gave birth to American independence itself, is as fitting as it is frustrating, since so little else connects the city to one of America’s greatest and most original architectural minds.

I spent this last weekend thinking a lot about Sullivan, mostly because April 14th marked 88 years since he died broke and forgotten in a cheap Chicago hotel. It’s hard not to wax melodramatic about a date that also witnessed Lincoln’s assassination in 1865 and the sinking of the Titanic in 1912; the three anniversaries share an unmistakable melancholy of lost possibility. 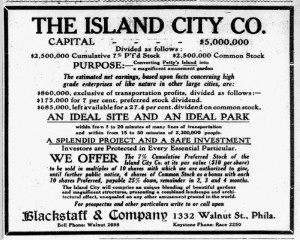 The story of Louis Sullivan and Philadelphia is one written in footnotes and false starts. Unlike Chicago, Buffalo, New York City, Saint Louis, and dozens of Midwestern towns, we have no Louis Sullivan buildings here. We don’t even have any of the Sullivanesque knock-offs that cropped up in other cities (the closest thing I’ve found is one half-hearted pastiche of Sullivan’s Chicago Stock Exchange in Frank Miles Day’s 1895 American Baptist Publication Society building at Juniper and Lombard).

It’s hard not to wonder what might have been: after all, Sullivan lived here for five months in 1873 and apprenticed in the offices of Furness and Hewitt. His Autobiography of an Idea recounts with pleasure his Sunday trips to Fairmount Park and hikes in the Wissahickon Valley. His time here was formative. Frank Furness, admired as an artist “who made buildings out of his head,” became Sullivan’s role model: the individualist thumbing his nose at traditionalism.

In his characteristic third-person voice, writes Sullivan, “in looking back upon that time Louis Sullivan gives thanks that it was his great good fortune to have made his entry into the practical world of an office where standards were so high—where talent was so manifestly taken for granted, and the atmosphere the free and easy one of a true work shop savoring of the guild where craftsmanship was paramount and personal.” But the financial panic of 1873 forced Furness to lay Sullivan off, and by November he was on a train to Chicago, seemingly never to look back.

Except that he did look back, at least once. In 1907, a group of prominent Philadelphia businessmen led by Colonel William F. Donovan and John M. Mack announced plans for Island City, a million-dollar amusement park to be built on Petty’s Island in the Delaware River between Philadelphia and Camden. Designed to rival Coney Island, it would feature a thousand-room hotel, a casino, theater, and ballroom, a bathing beach and river amphitheater to reenact famous naval battles, a sports arena bigger than Franklin Field, and a 250-foot central tower with six revolving colored searchlights visible for miles. And Louis Sullivan was to design the whole thing. 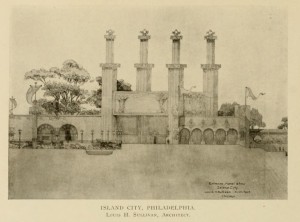 An advertisement seeking investors in the Island City Company appeared in the Philadelphia Inquirer in 1907, boasting, “The Island City will comprise a unique blending of beautiful gardens and magnificent structures, presenting a combined landscape and architectural effect, unequaled on any other amusement ground in the world.” Sullivan’s designs for Island City were published in the T-Square Club yearbook in 1907, the Inland Architect in 1908, and the Architectural Review in 1909, and they back up the boosters’ claims.  They show a series of buildings that fuse the dynamism and grandeur of his Transportation Building, built in 1893 for the Chicago World’s Fair, with the delicacy of his late-career Midwestern bank buildings from the 1910s and 1920s.  His characteristic organic ornament appears throughout, along with angelic figures borrowed from both the Transportation Building and his Bayard-Condict Building in Manhattan.  A banner-draped tower above the theater building boldly announces “AMERICA.”  It would have been beautiful. 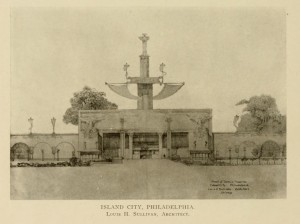 Of course it never happened; the plans fell victim to some forgotten and likely mundane turn of unfortunate events.  The only thing you’ll find on Petty’s Island today is a Citgo tank farm, an asphalt plant, and a field of shipping containers. America, indeed. So Philadelphia, the birthplace of American democracy, remains a footnote in the story of Louis Sullivan, the father of a true American architecture. But the question he first posed in Lippincott Magazine in 1896 remains as vital as ever: “How shall we impart to this sterile pile, this crude, harsh brutal agglomeration, this stark, staring exclamation of eternal strife, the graciousness of those higher forms of sensibility and culture that rest on the lower and fiercer passions? How shall we proclaim from the dizzy height of this strange, weird, modern housetop the peaceful evangel of sentiment, of beauty, of the cult of a higher life?”

His answer remains required reading for those of us who still look, in Philadelphia and elsewhere, for the better angels of our nature in the traces of the buildings that surround us.