Let’s Get To Work 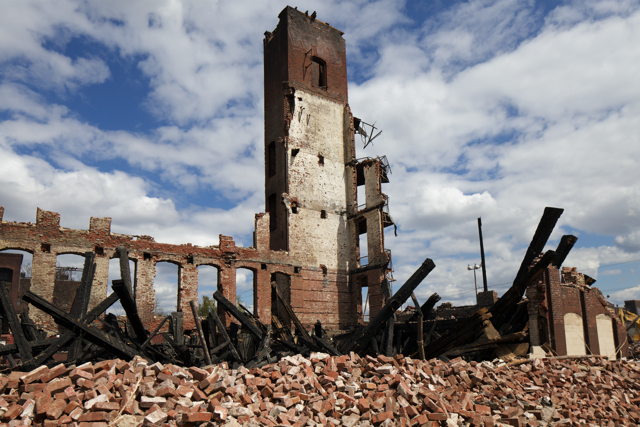 “Why is it,” noted a Fox29 reporter on Monday night, “we never learn about the history of these buildings until they’ve gone up in flames?”

It’s a damning question, perhaps the most insightful statement in the aftermath of the Buck Hosiery fire.

Let me rephrase it: why is it, in this city whose identity is so closely tied to hard work, production, and industry, we place so little value on the factories, mills, and complexes where the work was–and sometimes still is–done? Built over time beginning in the early 1880s, Buck Hosiery was a piece of elegant and charming industrial architecture. As first Glazier Hosiery then Buck then Smiley, manufacturers of fire protection equipment, what went on in this building helped to key Philadelphia’s development into the leading skilled manufacturing city in North America. 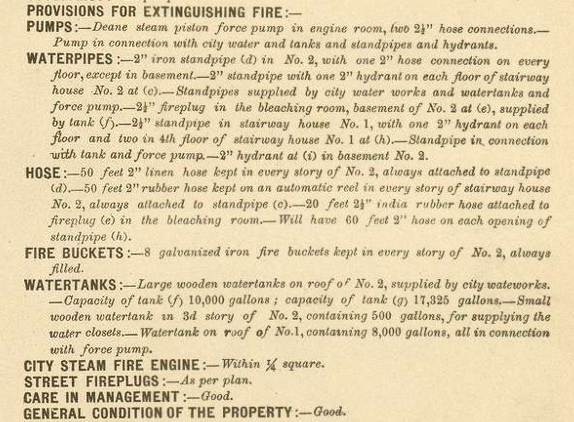 “Philadelphia is primarily a manufacturing city, the greatest manufacturing city on earth–‘The World’s Greatest Workshop,’ but she lays a special emphasis upon her prestige as the world’s largest manufacturer of textiles,” says the caption to the now iconic Public Ledger photo of Kensington’s skyline (find the photo HERE).

And yet Buck Hosiery isn’t on any list of historic sites and buildings and thus there was no special regulatory process beyond imperfect L&I inspections (and a fallible system of property insurance*) to protect it. Indeed, a quick perusal of the Philadelphia register of historic buildings, recently updated and put back on-line coincidentally the day of the fire, finds precious few examples of industrial architecture.

But, says preservation architect Shawn Evans, “preservation need not be constrained within those buildings that have been deemed to be historic.”

In fact, Evans points to available though under-promoted tools to assist owners of buildings like Buck get technical assistance and tax credits. Many of these resources can be found HERE, at the Preservation Alliance of Greater Philadelphia’s Preserve! Philadelphia program.

Still, these programs are limited by funding, manpower, and reach. The Preservation Alliance has gone a long way in recent years extending the reach of the act and idea of preservation, as have design-focused programs like the Community Design Collaborative and the fledgling Pew Center for Arts and Heritage’s Gray Area project. The Preservation Alliance’s recent campaigns for neighborhood (particularly African-American historic places) and Modern architecture have found some success in protecting key buildings and broadening the notion of historic preservation beyond its overwhelming Center City and famous architect focus. 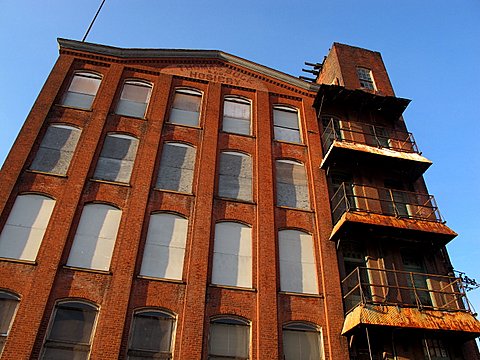 The imperative now, if we want to view buildings like Buck as the extraordinary assets they are–and not be forced to deal with them as catastrophic liabilities–is to create a preservation campaign for workplaces, factories, and mills. The point shouldn’t be to over-regulate contemporary uses or building adaptations, but to proactively give owners incentives to take care of them.

The imperative, indeed, is real. Directly across the street from the charred remains of Buck Hosiery is the original John Bromley carpet mill, vacant and exposed. Bromley launched from this corner, innovating methods, machinery, and materials until eventually building a massive complex on Lehigh Avenue, which employed thousands.

Now, as Sandy Salzman, executive director of New Kensington Community Development Corporation, told our Ryan Briggs yesterday, “it’s another one of those heavy timber buildings, and it’s right across the street. I’m so concerned because of how close it is to the Market-Frankford El. If it’s as hot a fire as the Buck building, it could melt the El.”

Is Bromley an asset or liability? The choice is ours.

Let’s get to work, shall we?

*The question of property insurance has been missing from this conversation. Did the owner have insurance? If so, why wasn’t he forced by that company to clean and seal his building? This is just another layer of protection that has failed.