In The Fire’s Aftermath, Fear And Uncertainty Lingers 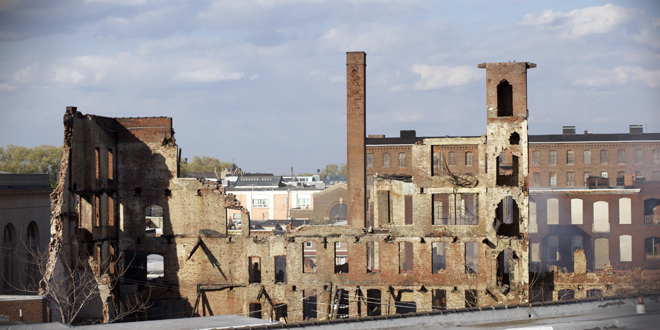 In just over a week since Hidden City’s story on the decaying Buck Hosiery building, this grand–albeit blighted– building, a potential keystone for the revitalization of East Kensington, has been transformed into a smoking heap, claiming the lives of two Philadelphia firefighters in the process. Taken by an inferno that burned so hot it melted the siding and rooftops on surrounding blocks, the aftermath has left the neighborhood reeling–and helplessly wondering which crumbling building will be next.

Yet, as swiftly as some peoples’ worlds have changed, others remain miraculously undisturbed. As neighbors and community leaders pick up the pieces, there has been only more hollow reassurance from the City that something–what, exactly, is still unclear–will be done. And, there is only more telling silence and inaction from property owners Michael and Yechial Lichtenstein, who are perhaps most responsible. They have released only a lawyer-approved sympathy note to placate those that have been touched by their negligence. 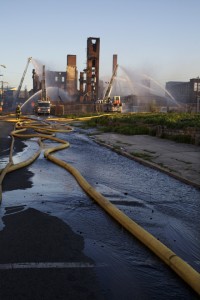 There is no shortage of rage and unanswered questions. East Kensington Neighbors’ Association President Jeff Carpineta, who warned of impending catastrophe in last week’s story, was outraged that the City’s prior failure to act is now costing taxpayers an untold fortune.

“Look at the bill now, probably 300 grand for demolition, Streets Department overtime, Fire Department overtime, L&I overtime, they’ve got engineers out there, just the water bill alone must be gigantic. And you’ve got injured firefighters, houses that are damaged. Even the telephone poles were incinerated around the building,” he said.

Carpineta said he was sick of the City’s “owner solution” of hoping they can prod a landlord into stabilizing or sealing a dangerous structure.

“The city needs to devote some money to protection. They’re spending a hundred times that dealing with the aftermath. $20,000 would have worked wonders out there,” he said, adding, “the city doesn’t see it like that. They’re like, ‘we don’t have the money’. Really?”

Sandy Salzman, Executive Director of the New Kensington Community Development Corporation, also mentioned fears, echoed by Carpineta and other neighbors, that a similar vacant industrial building nearby could be next. 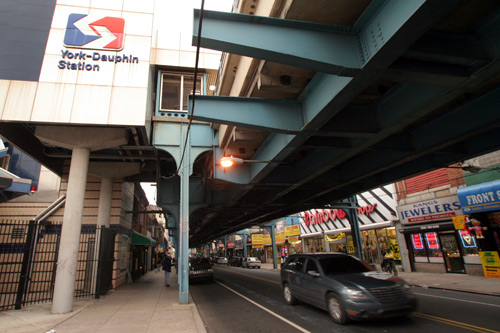 “It’s another one of those heavy timber buildings, and it’s right across the street. I’m so concerned because of how close it is to the Market-Frankford El. If it’s as hot a fire as the Buck building, it could melt the El.”

Salzman also spoke to the common feeling that a great deal of blame lay with the absent landlords.

“There should be a class action lawsuit. I’m sure the developer is going to try to blame this neighborhood because druggies or derelicts got into the structure, but the fact is they should have sealed their building,” she said. “They just didn’t care at all about this neighborhood.”

Salzman has a particularly compelling point given that another large, landmark structure on the very same block as the Buck building was in the process of being actively renovated–until the deaths of the firefighters turned the building into a crime scene. 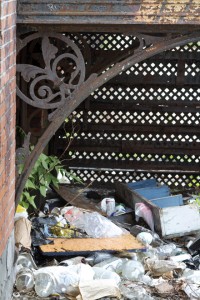 Under the stairs at the Buck Hosiery Building, 2011 | Photo: Peter Woodall

Andy Molholt and Vincent Finazzo had been working with the owner of 1805-7 York Street in hopes of hammering out a lease agreement in which they would finish interior work in exchange for discounted rent. They had planned to use the building for studio and gallery space.

“Our building was immediately adjacent to where the two firemen died, so we haven’t been able to get back inside to see if there’s major structural damage,” said Molholt. The building has been sealed pending investigation.

“We have to wait to get a police escort,” he said.

Their lease agreement is, unsurprisingly, on hold.

Molholt said it was “no secret” the building had been breached, and that he and his partner had been inside “a ton of times” scouting out potential building materials amongst the heaps of refuse inside.

“Anyone who’s not morbidly obese could get into that building,” said Molholt.

“I know for a fact there were homeless people in there. One of our neighborhood friends who had filed a ton of reports to L&I about that place was in there and saw a scrapper setting fires in the basement. I’m convinced that’s what started it.”

Molholt said his friend’s complaints had all been rejected by L&I as “unfounded.”

L&I has been hammered in the aftermath of the fire for failure to act. Spokeswoman Maura Kennedy did not respond to interview requests as of press time.

The only city agency to truly move against the property owners was the Revenue Department, who had actually initiated steps last month to move the Buck Hosiery property to Sheriff’s sale to collect on back taxes.

While ultimately the move came too late for Buck Hosiery, the Lichtenstein brothers and the various incarnations of their company, YML Holdings, own at least 30 other properties in Philadelphia. Mostly rowhouses in West and lower Northeast Philadelphia, several of the properties are abandoned and decaying, and all told, the brothers owe over $45,000 in back taxes and liens on the collected properties. Some of the properties are prime targets for Sheriff’s sale.

There is no way to undo the tragedy that took place in Kensington, but there is still a chance for the City to enforce its own regulations by clamping down on the people who abetted it. Moreover, it’s an opening to rethink the way we treat buildings like Buck–those at risk, but which also hold enormous potential. Buck was a latent asset for this city. If it had been treated that way it would not have become an enormous liability. There are yet thousands of other Bucks across the city. How will we treat them?