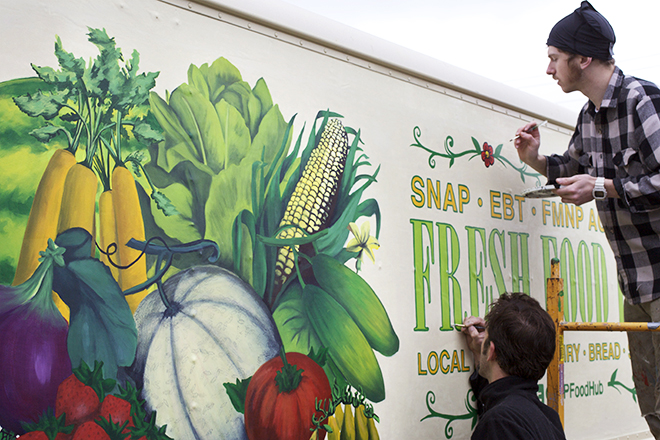 West Philadelphia’s Fresh Food Hub, a new mobile market based at 37th and Lancaster Avenue in Powelton Village, will open tomorrow, April 25th. With support from Greensgrow and Preston’s Paradise, the Food Hub will operate 5 days per week, 6 hours per day from a freshly converted bread truck. The market will also run at other locations, including the Philadelphia Senior Community Center and community events like block parties, at least once a week.

“We tried to localize everything about the project, including the truck itself,” explains Ryan Kuck, a former farmer at Greensgrow and now the Food Hub’s project manager. The bread truck was completely redone: a festive mural on the side was designed by artist Brad Andrew Carney; metal fabricator Billy Dufala made a roll-up door and installed a canopy for protection from the sun and rain. Food is stored inside the truck and available for sale on the side of the truck. When the truck is in operation, Kuck says, “it becomes part of the sidewalk.”

One aim of the project is to build on the long history of food trucks and food truck vendors by adding diverse, fresh, and local foods.

Project co-sponsor Preston’s Paradise manages 10 community gardens and orchards and has been running a push-cart market for several years. “We needed to grow,” says Kuck. “People wouldn’t know how much food we’d have available.” So they switched to a food truck with more flexibility and a larger farmers’ network in partnership with Greensgrow.

The Food Hub will stock more than fresh produce. Kuck wants the truck to be like a healthy corner store, where people can find a range of products. They’ll stock homemade herbal teas, fruit salad from the Urban Nutrition Initiative, fresh bread in a pending partnership with Betty’s Speakeasy, and certain package goods like tomato sauce and jarred peanut butter. 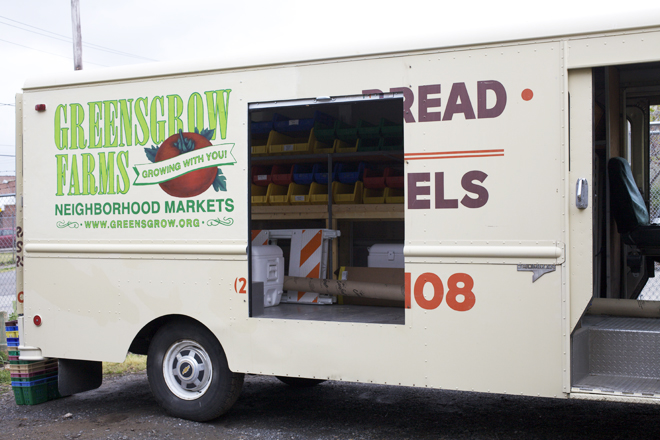 The other side of the Food Hub truck with the roll door up | Photo: Peter Woodall

Kuck says the Food Hub will work with a nearby Shop Rite to to help create markets for local Philadelphia producers. Such items include soap, fruit juice, granola bars, hot sauce, and salad dressings.

A future goal is to make the Hub a distribution site for diners and cafes that may not have fresh foods available for customers. They’ll start by providing fresh fruit salads at breakfast counters and work from there.

The Food Hub is financially supported by Greensgrow and Preston’s Paradise, but otherwise it runs on produce sales. As Kuck explains it, there’s an unwritten guideline that Greensgrow will “put its weight under the project” for three years. Then, it’s expected that the Food Hub will sustain itself.