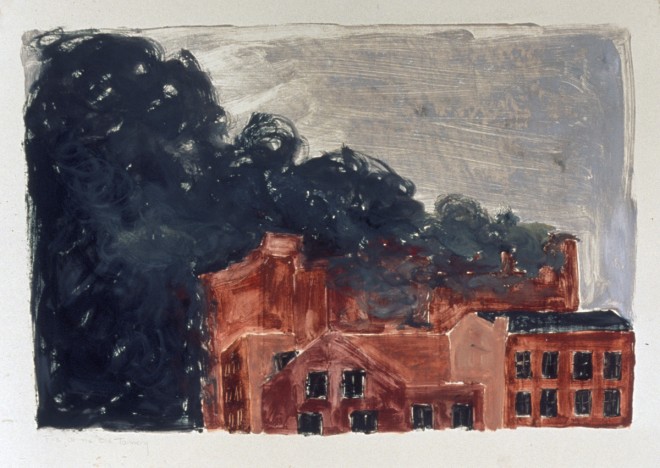 The terrible five-alarm fire that swept through the empty Thomas Buck Hosiery building in Kensington and killed two firefighters is the latest incendiary incarnation of a persistent city nightmare. There are monstrous city fires that sweep over vast ranges in a single instance of destruction. And there are serial fires that gradually devour over a long period of time. The Bronx burned through the 1970s.

In Philadelphia’s Northern Liberties, where I lived with my wife, the painter Jennifer Baker, the fires began in the 1980s and continued into the 1990s. Around our house on North American Street, from 1988 to 1994 at least two dozen fires ravaged the neighborhood, terrified the residents, and cleared the land. Multiple alarm fires took down the Swoboda tannery and the Morris Schiff warehouse on American Street, the Mattress Warehouse on Second Street, empty residences on cross streets. The old Burke Brothers tannery was struck by multiple fires until the city finally demolished the enormous hulk.

I remember I was in the newsroom on the afternoon of June 7, 1990 when Jennifer called.

“The tannery’s on fire,” she said. “It’s unbelievable. Fire trucks everywhere. The whole street is full of disgusting smoke. The flames are incredible; they’re shooting way over the roof. We’re okay, though, it’s not coming our way.”

I put down the phone, walked over to the north side of the room and looked out toward Northern Liberties. About a mile away I could see a great trail of brackish smoke rising up over the rooftops and drifting west, as though the neighborhood had been strafed.

I went back to the phone. “I’m coming over.”

It’s not as though the burning of the tannery–the Swoboda Calf and Kid building, an adjunct of the Morocco complex down the street–was a surprise. The building, which filled most of a block on the west side of American Street north of Wildey, had worried people for years. “We complained and complained about the tannery,” Amy told me. “But nothing happened. Nothing.” 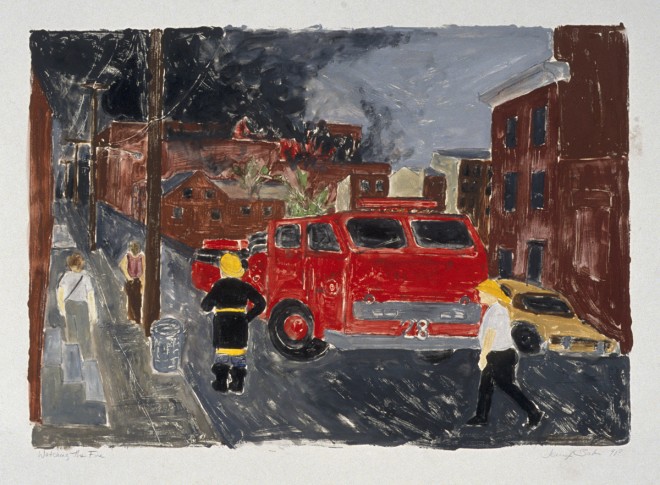 The afternoon the tannery went, Amy was at home with her baby. They lived less than a block from the building.

“Jessica was a few months old and I opened the door and I thought it was a tornado, the smoke was so bad and the wind,” she said. “I went up to my mother’s in Germantown for three nights until it was completely out. We cleaned up the soot for days after that.”

Gary was leaving for Chicago the afternoon of the fire.

“I was helping him pack when I heard the sirens,” said Treacy. She and Gary lived four houses from the tannery.

“I went out on the deck and the flames were shooting straight up. They were huge. I only hung around for about 15 minutes because I was pregnant and I thought this is terrible, this is a terrible place to be pregnant. I went to my girlfriend’s house. I was away for a week and when I came back our whole house smelled of charcoal. I called up the EPA and said I was pregnant and could they assure me it was safe to go back to my house and they said, no, they could not.”

I got to American Street in the late afternoon. The street was filled with fire trucks and firemen and people. A block and a half away, sickly brown- and yellow-black smoke plumed up from the top of the tannery and cascaded into the street. As it rolled down the walls, the smoke seemed almost too heavy to rise, a rich lava filled with a hundred years of bubbling waste. The fire had reached six alarms by this time with hundreds of firefighters working to bring it under control. Jennifer was inside our house, all windows and doors closed. Our daughter, Mollie, just two months old, was in our bedroom. By early evening, the street took on a dead color–the way Los Angeles looks when there are fires deep in the canyons and ash fills the sky and sifts down all over the city. A strange odor started to seep down the street.

“Let’s get out of here,” Jennifer said. We spent the night in her studio.

A fire like the tannery fire and like the Buck mill fire in Kensington triggers a primal fear: Nothing can escape such destruction. It will eat through anything, an alien and unstoppable presence. That fear can infuse a neighborhood. That’s what happened in Northern Liberties in the early 1990s. The same with the Bronx in the 1970s. Multiple fires stoke the fear, just as the waste and debris of decaying neighborhoods stoke the fires. Northern Liberties stopped burning when there was nothing left worth the flames.