Jack of All Trades

Editor’s Note: The building on the southeast corner of Norris and Sepviva has been tugging at our curiosity for years. There is a decorative relief of a hose and hydrant on the front of the building, and an enamel sign that says “Ampere Electric” around the side. Plus, the place has a cast metal facade on the first floor, an external fire escape and a slate sidewalk, which make it look like it belongs in Old City rather than Fishtown. Owner Greg Traceski showed us around on Tuesday, and the building didn’t disappoint, as Theresa Stigale discovered.

Theresa Stigale: This building has a grand scale–what’s the history and when was it built?
Greg Traceski: It was built in 1860 and has had a lot of uses. It was originally built as a fire house but then it was also used as a vaudeville house, brothel and even a post office. 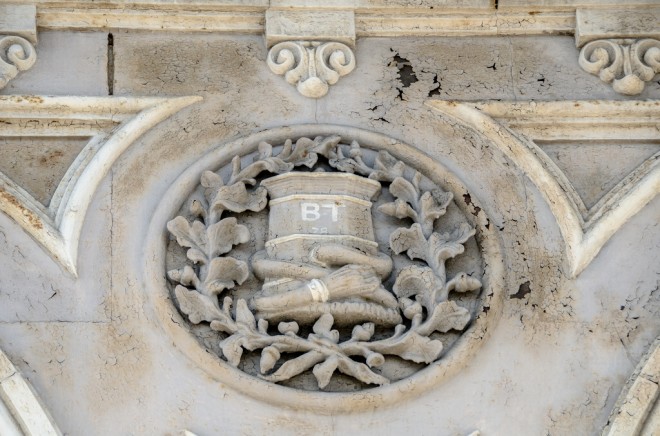 GT: Back in the 1860’s fire houses were private and owned by insurance companies. It wasn’t until 1871 that the Philadelphia Fire Department incorporated. The insurance company named this fire house the Friendship Engine Company No. 15; under the city it then became Hook and Ladder Company C in 1871 and was here until about 1878. When the firehouse was here, they guys lived upstairs on the top floor and rented out the second floor as one big hall. It was rented to a lot of fraternal organizations. Back then there weren’t too many entertainment options for men, other than bars, no tv or sports. So there were a lot of clubs that charged dues and provided entertainment and comeraderie. Some gave themselves Indian names and referred to their cash assets as “wampum”. They considered themselves a “tribe” and addressed each other as ”Chief”and “Brother”, and signed off on letters as “fraternally yours”. 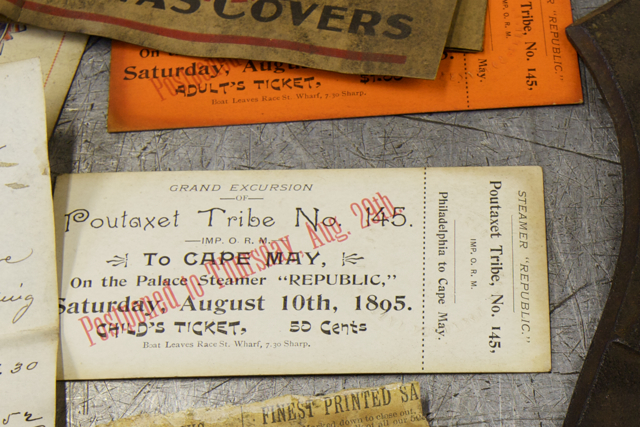 GT: After the Civil War it was used as the Grand Army of the Republic Veteran’s Hall, up until about 1907. The second floor was eventually split into two floors because of the extra high ceilings and oversized windows. You can see on the outside that the windows were eventually bricked up in the center and retrofitted with traditionally sized windows. 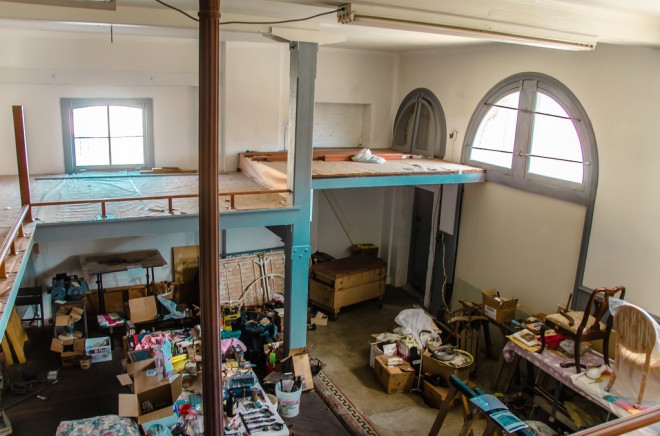 GT: Here is the large front room that was used by the post office. This balcony here in the front room was added when it was used as a post office back in the 1920’2 & 30’s—probably because back them people actually used to send a lot of cash through the mail. This way, the managers could keep an eye on the postal employees, and there were fancy glass dividers, which I have in storage. See here the floors are pretty fancy with an octagonal wood design and terrazzo. I had heard that it since it was federal money, they spend it freely on the finishes. 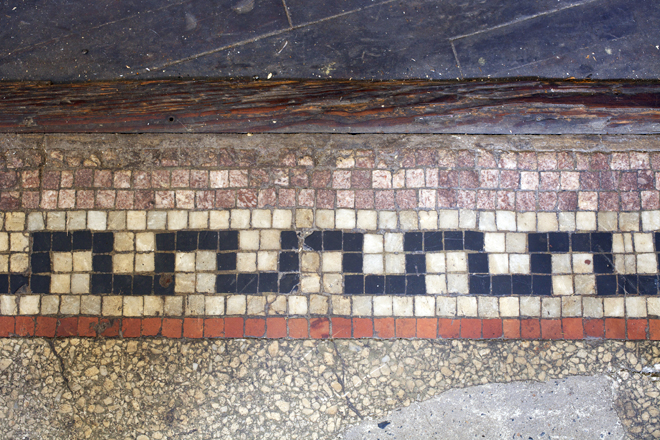 TS: Have you turned up any artifacts from these previous uses?
GT: We’ve found a lot of stuff throughout the building; letters, tickets, military medals. We find things in the floors and walls. All of my memorabilia came right from the building.

TS: Why is there fancy wallpaper on the top floor?
GT: Well I don’t think that the firemen put it there! My guess is that it was from the brothel. I have some wallpaper scrapings that I kept and thre are newspaper imprints on the back (photos). 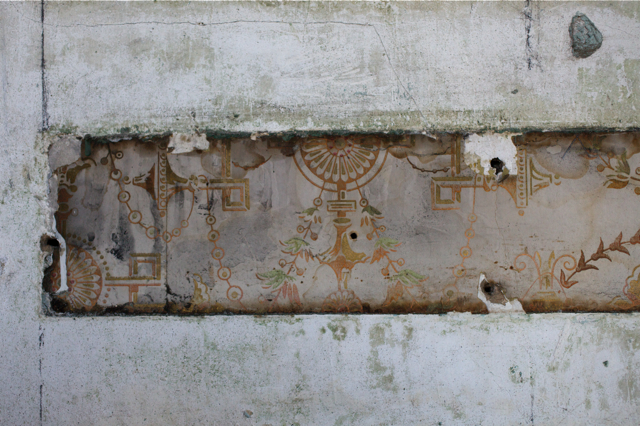 GT: There are also a lot of peep holes throughout the place on some of the interior wood doors, which may have related to the brothel. There’s alsop what looks like it might have been a box office with a door that only latches from the inside that has a trap door below, I guess so the guy with the money could hide in a raid. 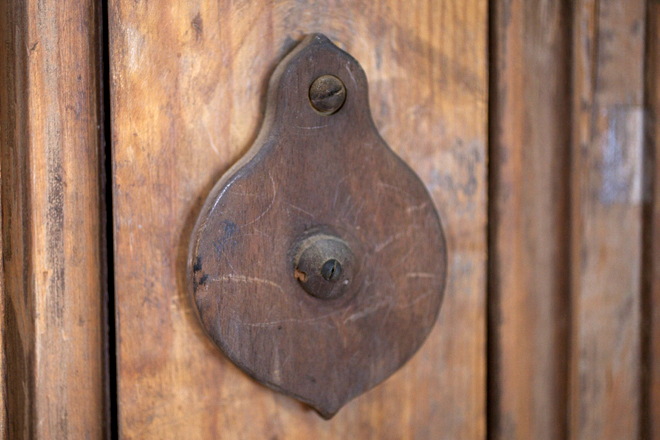 TS: How did you get into the electric motor repair business?
GT: My grandfather opened up the shop right before the Depression in ‘28 or ‘29, he worked out of his house in Delaware County. Then he moved to 7th & Green and did construction and electrical work for factories. My uncle was in the Navy in WW II as an electrician and worked in the business with my grandfather and Dad and in 1950 they moved here, so I am the third generation in this building. They bought the building from Dreifus & Co., an Army-Navy store. Originally, they set it up with the machinery in the front of the first floor and the motor shop in the back. I’ve been living and working here most of my life, since 1970.

TS: You were doing the loft thing before there was a loft thing! 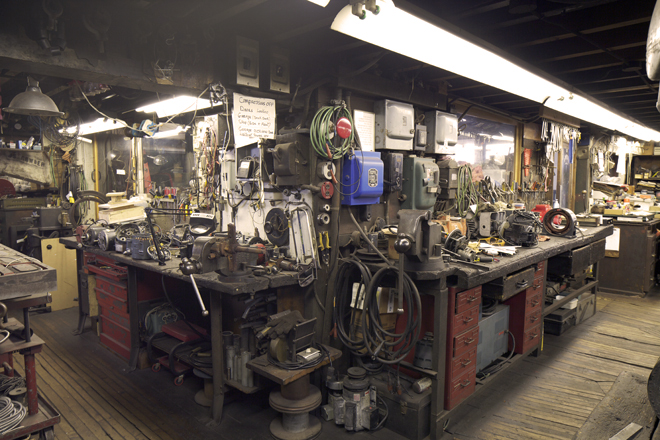 TS: What is your typical repair?

GT: We get a lot of jobs through electricians for who are doing work for all types of businesses. We repair motors for elevators, manufacturing, basically any appliance or machine that has a motor.

I can look at a motor and tell you how old it is. We stock all kinds of antique motors and rebuild some of them as soon as we get them so that they are in stock and ready to go to the customer quicker. Others, we will just stock for parts or will rebuild it when a customer needs one. 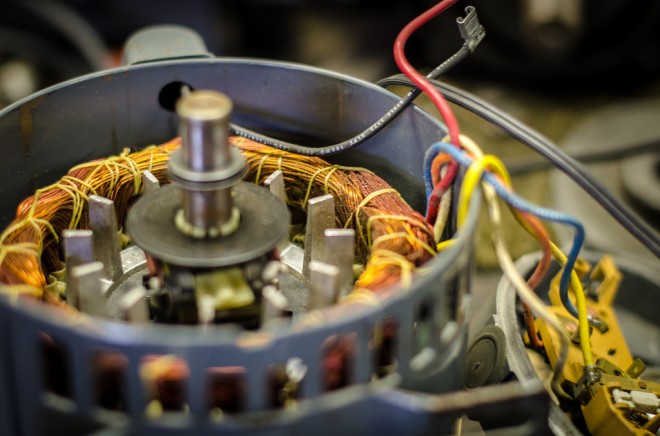 GT: With the cheap motors coming out of China a lot of people are just buying new ones at Grainger rather than fixing their old ones. But some companies still use older machinery that they can’t buy a new motor for because no one makes them anymore. Some of the old dye houses that are left in the city–Columbia Silk Dyeing and Caledonia Dye Works–bring their motors to us. It’s definitely a niche. There are only five motor repair shops left in the city and one guy is retiring, another places outsources the repair work and I’m looking to sell this building and retire.

TS: Got any good ghost stories?
GT: Believe it or not, I haven’t seen any, although a ghosthunter group did contact me and wanted to send half a dozen people here to stay overnight and explore. They had a feeling with all of the past uses that there might be ghosts, but that never happened. You would think that this building should have some ghosts but I think I would have seen them by now.