Fever 1793: With Capital In Crisis, Stephen Girard Rises To The Occasion 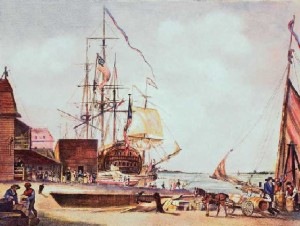 Tonight’s 6ABC broadcast of “Fever: 1793,” the second of History Making Production’s multi-part series on Philadelphia history, covers, of course, the devastating Yellow Fever epidemic of 1793, which is still regarded as the worst urban disaster in United States history. The film explores the epidemic, as well as the broader implications and lasting effects of the crisis that put the young US government at risk.

Sweeping outward from the congested neighborhood around Water and Arch Streets, this plague claimed the lives of some four thousand people, about 10 percent of the city’s population at the time.

In late summer of 1793, as the number of deaths began to climb, Mayor Matthew Clarkson asked the College of Physicians of Philadelphia to call a meeting of local doctors to determine what to do. This was the first time in American history that a government entity asked a medical organization to investigate a health care matter. Sixteen college fellows convened but could offer no solution for the contagion. As historian Alan Guelzo says in the film, “no one has any clue about how germs communicate or carry disease.” These great scientists and doctors–who had made Philadelphia the medical capital of America–could did not understand that a virus like yellow fever could be transmitted from monkey to man and then from man to man by mosquitoes. (Dr. William Currie’s follow-up treatise on the epidemic does correctly trace the disease from Africa to the Caribbean to Philadelphia’s port, but doesn’t name the mosquito as vector.) These mosquitoes happened to be most plentiful along the Delaware waterfront.

Dr. Benjamin Rush’s hypothesized that an unclaimed shipment of coffee rotting in the hot humid sun was the source of the epidemic. The doctor’s supposition was wrong, but it may have prompted Mayor Clarkson to order city scavengers to clear out the streets and gutters, starting with Water Street. This did not help. 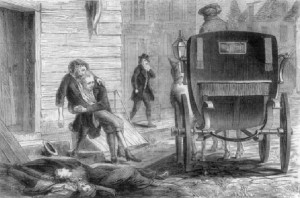 An image of Stephen Girard (apparently) taking a sick person to Bush Hill in his own carriage.

Twenty thousand citizens including George Washington, Thomas Jefferson, and other members of the federal government fled the US capital to the countryside. This wasn’t good timing, as the film points out. With war between France and Britain raging in the Caribbean, the US with all its trade connections there, was at risk.

No one perhaps profited as much from that trade than merchant-shipper Stephen Girard. Perhaps this motivated Girard to stay and help guide the city through crisis. He contributed money to help victims of the epidemic and performed the duties of a nurse when the plague was at its worst. He volunteered to manage the temporary municipal hospital at the estate Bush Hill (located at what would become 17th and Spring Garden), changing it from a dirty hellhole into a clean and efficient infirmary. Girard even used his own carriage to transport stricken people there. In doing these things, he risked his life for no perceptible personal gain.

After three months of misery in Philadelphia, the plague subsided when the weather cooled in the fall and the mosquitoes died. Yellow fever reappeared in subsequent years, all the way to 1830, and sometimes with equal ferocity (but never bringing quite the same civic crisis).

Not much changed in those subsequent years in terms of the state of Water Street. The following is an account–from Isaac Weld, Travels Through the States of North America (1799)—of the cartway’s still–dismal condition at the turn of the nineteenth century:

[Water Street] is the first street which you usually enter after landing, and it does not serve to give a stranger a very favourable opinion either of the neatness or commodiousness of the public ways of Philadelphia. It is no more than thirty feet wide, and immediately behind the houses, which stand on the side farthest from the water, a high bank, supposed to be the old bank of the river, rises, which renders the air very confined. Added to this, such stenches at times prevail in it, owing in part to the quantity of filth and dirt that is suffered to remain on the pavement, and in part to what is deposited in waste houses, of which there are several in the street, that it is really dreadful to pass through it. 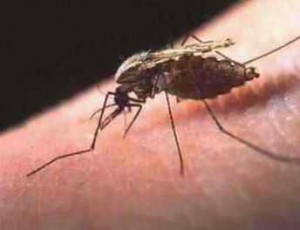 Philadelphia’s Water Street did not improve in following decades. As the prime breeding ground for disease; scourges (e.g., malaria and typhus) had always made their initial appearance along Water Street from the city’s founding until the early 1900s.