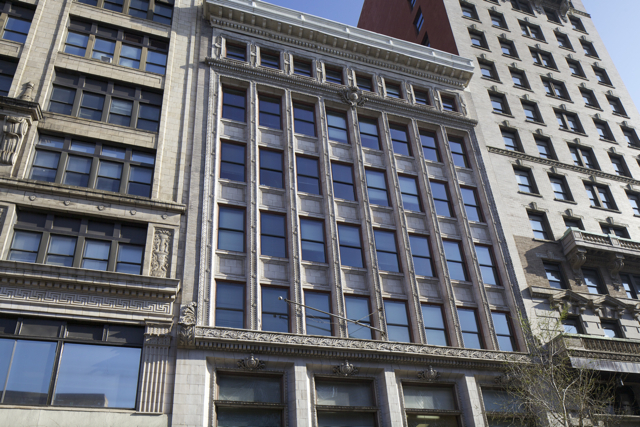 On the twelve-hundred block of Chestnut Street, the story starts with Anthony M. Zane, real estate juggernaut. At the turn of the 20th Century, this guy was continuously buying and selling large-scale properties all over the city and region. He was so shrewd that he would be trusted by the old Philadelphia families, mostly the Elkinses and Wideners, to conduct real estate deals in their name. He loved tearing down historic pieces of the city, which he, among others, considered the “Old Philadelphia.” At one point, Zane even tried to take down the famous Union League building on Broad Street! He is also responsible for large tracts of housing in North Philadelphia and resorts in Cape May. 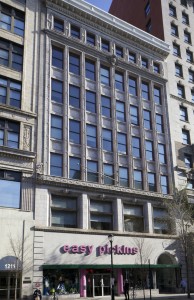 In 1901, one of his many transactions was the purchase of 1207 and 1209 Chestnut Streets, old commercial buildings that stood right next to the third Chestnut Street Theatre.

In early 1902, Zane hired building contractors Doyle & Doak of Philadelphia (with offices in the Hale Building!) to construct a new seven-story 56,000 square foot office building. The cost would be $125,000.

Zane chose the firm of James Hamilton Windrim & Son, who also designed the recently constructed Commonwealth Building next door. So pleased was he by the plans, modest Mr. Zane decided to name the building for himself.

Around the same time, the city moved ahead with a plan to widen Chestnut Street. Zane’s site would be inaccessible during road construction. Old Zane didn’t like this one bit. Time is money, after all, and so he sued. The judge compensated him $4,050 for the delay. Zane took the cash and finished his monument in 1903. Wasn’t it something: “a modern office structure, with the most approved elevator service, electric lights, steam heat, and a broad, well-lighted stairway.”

One of the first tenants was Banks’ Business College, a for-profit business school with classes in stenography and business management. About two years earlier, Banks’ had tried (and failed) to have their name changed to the University of Philadelphia. The school moved frequently and only stayed in the Zane Building until 1910. 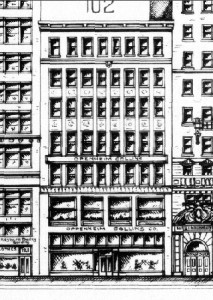 The Zane Building as it appeared in May, 1922 | Image: The Philadelphia Architects and Buildings Project

That year the New York-based department store Oppenheim, Collins, & Co. rented Zane’s storefront and a few years later the office space above. They spent $20,000 on alterations to the interior and storefront modifications. But then nine years later, a massive fire destroyed most of the building. Some parts of Zane’s old flame would stay that way for decades. Oppenheim, Collins, & Co. said “screw this” and built their own new building at 1126 Chestnut.

In the late 1920s, the Grolier Society Inc., a Boston-based publisher of textbooks and reference materials, moved in and stuck around until the late 1950s, altering the building to meet its needs at least once along the way. Another for-profit business college, the Chester Taylor School, came and went. All the while the most notable ground floor retail tenant was Hardwick & Magee Co., a furniture and carpet store. H & M used both the storefront and offices above on and off through the 1940s, 1950s, 1960s, and 1970s.

After Hardwick & Magee departed, the building became Pennsylvania Mental Health, Inc. This was a mental hospital/treatment center/rehab clinic that occupied the Zane for most of the 1970s and early 1980s. In 1987, the building was thoroughly renovated and some of the damage from the 1919 fire was finally fixed. Then it became home to U.S. Radio Inc., a small broadcasting company that operated radio stations all around the country, sharing the structure with the Keystone State Life Insurance Company. Both used parts of the building in some form or another up into the mid 1990s. 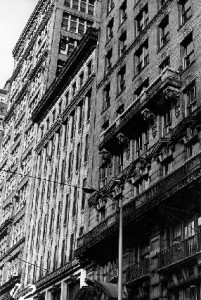 The Zane Building as seen in 1960, its cornice still damaged from the 1919 fire | Image: The Philadelphia Architects and Buildings Project

This is when the Zane Building came into the use it has today–a home for a long list of social service and environmental non-profit organizations. These do-gooders began renting offices one by one in the 1990s. Nowadays they fill the place.

Alas, the story doesn’t end there. The Zane Building was recently purchased by Posel Management, a real estate leasing, management, and investment firm, for $5.2 million. Moneybags Zane will be pleased, I should hope, by a cash infusion for this little Beaux-Arts Awesome-Box. It’s not INZANE! Chestnut Street east shall rise again.