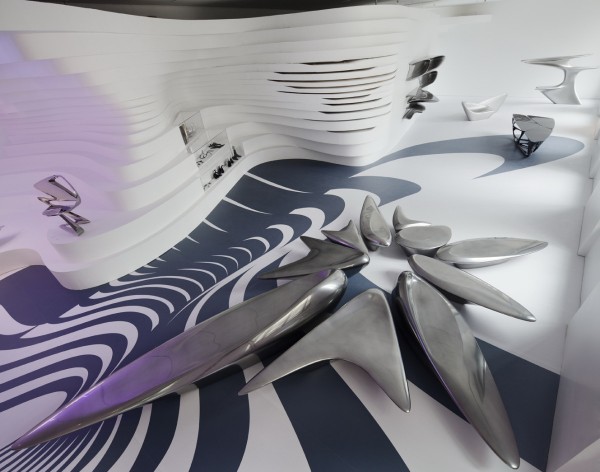 Sunday is the last day to view “Zaha Hadid: Form in Motion” at the Perelman Building of the Philadelphia Museum of Art. The small but groundbreaking exhibit is a revealing lens on one aspect of the present wave of global urban architecture that sees buildings as extensions of the natural landscape rather than impositions of form.

Urban forms indeed are changing–advances in materials engineering is making it possible–and Hadid’s work is at the forefront. The exhibit itself, a landscape of her furniture and products, defies the rectilinear room in which it was installs.

This act is full of symbolism, for Hadid proposes a radically different urbanism, a characteristically visceral response to air and wind, mass and movement that could very well alter our understanding of how to live on this planet. Sit for a while in her earth chairs and watch the endless video simulations of her projects and you can see the world transforming in front of your eyes: here are buildings that rise from the landscape, that beckon us to walk in, on, around them. 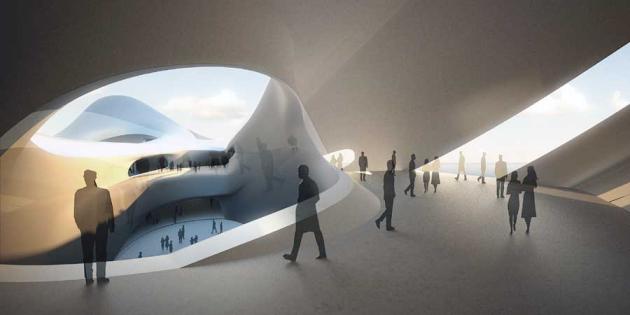 Back in November when I wrote a profile of Hadid for the Inquirer, I asked certain people if they thought she might one day be commissioned to do a project here. Most people looked at me like I was nuts. Some architects downplayed her importance. Others shrugged. One prominent cultural impresario said Philadelphia wasn’t ready, and probably never would be. There’s not enough literal or figurative space here for such a big thinker, said this person. Hadid would eat us for lunch.

Fearing our provincialism, on the night Hadid received the annual Collab Award for design excellence, a New Yorker was asked to lead the conversation.

Too bad, that attitude, yet another wasted opportunity, for indeed, there’s plenty of room–the waterfront and the Navy Yard most assuredly–for transformative architecture of the kind Hadid composes.

She’s now been here four times since her initial lecture at Philadelphia University in 1994, well before she was taken seriously. We’ve gotten a temporary room installation and a chance to show that we’re interested in avant-garde design. Next time, how about we take her down to the Navy Yard, let the ships and the bridges and the terracotta palaces speak to her and see what she has to say in response.