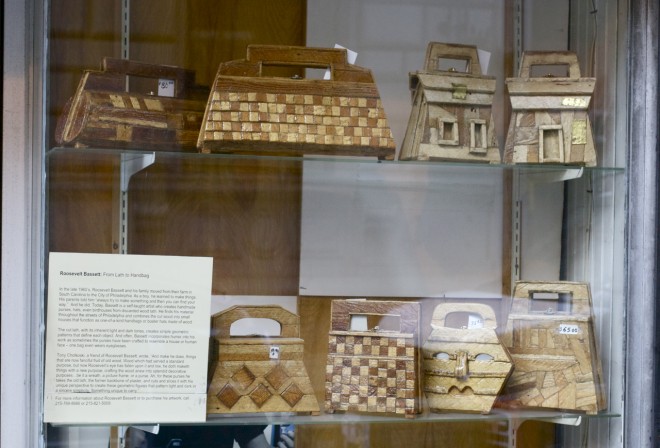 Walnut Street west of Broad is the land of expensive handbags, of thousand dollar distressed leather clutches and leather and suede messenger bags with magnetic metal mock-buckles. Strange, then, to find a small display of purses made of rough-hewn wood in the side-window of the convenience store at the corner of 15th and Walnut. Dearer to the heart of Hidden City, the purses are made from discarded lath, and some take the shape of houses.

These objects are the work of an artist named Roosevelt Bassett, according to the sign, which is a curious artifact in its own right. It says that Bassett is a self-taught artist who moved to Philadelphia in the late 1960s from his family’s farm in South Carolina. More unusually, the note features a lengthy recommendation of Bassett’s work by his friend Tony Chotkoski, whose praise has an almost biblical sound, thanks to sentences like “now Roosevelt’s eye has fallen upon it and low, he doth maketh things with a new purpose.” The whole thing is odd enough to seem almost like an elaborate hoax, a pop-up installation by a trained artist playing at primitivism.

We called the number on the card and find out what was going on, and sure enough, a Mr. Bassett answered the phone, and said that he couldn’t talk long because he was standing on a ladder. He said that the display had actually been there for a year, maybe two, but had spent six months at the Philadelphia International Airport and had only recently returned. The purses had come to be displayed there when he’d walked into the store looking for a cigar box and got to talking with the owner, who liked what he was doing and offered to put them in the window. They are completely functional, cost less than $100, and even have a silk lining. Who says there aren’t any bargains on Walnut Street?