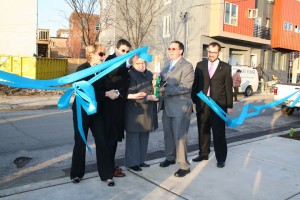 Photo: Soak It Up, Philly!

The main goal of the program is to reduce the amount of water that enters our sewage management systems, beginning with capturing the first inch of rainfall. “These methods stop rain where it falls, allowing it to filter back into the ground,” writes Larry Levine, Senior Attorney of the Natural Resources Defense Council, in his staff blog. “That keeps it from turning into runoff that carries pollution, like oil and gas products, trash, and pet waste, from paved surfaces into the water. In the hundreds of U.S. cities where storm runoff and sewage flow through the same pipes [like Philadelphia], it also keeps rain from overloading those outdated ‘combined sewer systems’ and triggering overflows of raw sewage–a.k.a. poop–directly into nearby waters.” 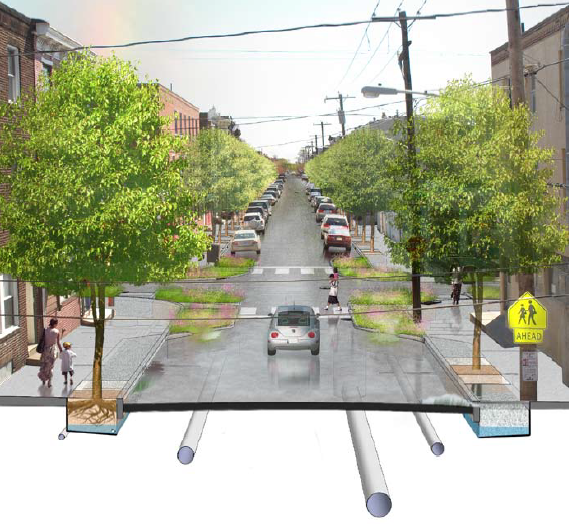 To keep the poop away, Green City, Green Waters will guide the installation of green stormwater infrastructure tools: stormwater tree trenches, rain barrels, bump-outs, and pervious paving. A bump-out, for example, is a raised bed of of soil and vegetation that captures rain water by protruding into the street from the existing curb. This way runoff can be stored and absorbed before continuing to the storm drain.

Taken together, says Joanne Dahme, PWD general manager of public affairs, these measures will transform “over one-third of the impervious surfaces in our Combined Sewer Overflow areas” to allow them to handle the first one inch of stormwater runoff. This is a paradigm shift in urban infrastructure from the single-minded expansion of the over-taxed underground sewer system to one that’s preventative, proactive, nimble, sustainable, and fiscally sensitive. 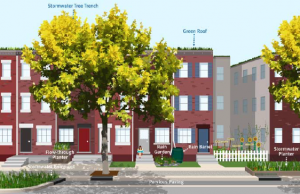 It isn’t, however, cheap. PWD is investing $2.4 billion dollars ($3 billion in total project cost, including lobbying) in this initiative. The key, according to officials, is that the new program, along with its many subsets, will create revenue within its first year. Although PWD doesn’t officially state the full prospective amount of revenue, according to the plan, after 45 years “the plan will have generated more than $1 in benefits for every dollar invested.”

Critically, according to the Green City, Clean Waters PWD Summary Report, “water quality benefits will accrue year after year, versus having to wait 15-20 years for a grey infrastructure project, such as a tunnel, to be built.”

This is good news, especially since the plan is primarily funded by ratepayers.

Here’s a quick breakdown of some of the costs as outlined in the Summary Report: $1.64 billion for green stormwater infrastructure, including  $181 million dollars planned for restoration of the Cobbs and Tookany/Tacony-Frankford Watersheds; $345 million for Wet Weather Treatment Plant Upgrades including expansion of the Northeast and Southwest Pollution Control Plants; and $420 million on Adaptive Management.

These are all long term goals and investment benchmarks, of course.  While PWD and partners have been researching and planning for these initiatives and improvements for the past 14 years, the official consent order and agreement (COA) was only signed last June, initiating a 25 year implementation schedule.

According to Dahme, there have been no major setbacks so far. She notes that the plan is still in a “proof of concept phase.” The next step is to create a strategy for the next five years. The Implementation and Adaptive Management Plan (IAMP) will outline progress measurements and short-term benchmarks as well as specify ways to adapt the plan throughout the process.

For now, PWD is seeding green infrastructure projects throughout the city, including a few already complete. Dahme says these project are key to building “public acceptance and enthusiasm” for Green City, Clean Waters.

In fact, unlike traditional infrastructure programs in which a bureaucratic agency designs and installs improvements with little or no public input, the framework in this case is turned inside out. PWD has set its guidelines, goals, and methods and it will be up to people to carry them out. As such, PWD is partnering with community based organizations across the city. 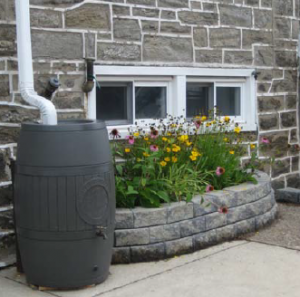 Thus, the challenge here is to educate and inspire Philadelphians on how to manage rain barrels, rain gardens, bump outs, and on the other proscribed methods. According to Dahme, thus far the public has been “overwhelmingly supportive and excited” about Green City, Clean Waters. Nevertheless, in an impoverished and often filthy city, getting sustained resident support will be a challenge, especially since the benefits are mostly invisible.

My earlier article on Hawthorne Park also involves cooperation among city officials and residents, along with tensions and struggles for community voice. The Green City, Clean Waters plan, however, is a bit different. The community isn’t demanding these solutions, but are nonetheless expected to be a part of it.

Since I last spoke with Dahme there have been new steps forward in this regard. Much of PWD’s work has happened in chunks, focusing on one small community at a time. But now, in partnership with the Pennsylvania Environmental Council (PEC), PWD will streamline the community engagement-heavy plan through the new ambassador program.

Another soon to launch Green City, Clean Waters project is the Rain Check program.  Homeowners can choose to have almost 100% of the cost of installing green stormwater management tools covered with PWD footing the bill. Such Rain Check-specific tools include rain gardens, de-paving, and yard trees.

There are, however, real issues here, including the possible tensions between those who are on board and those who aren’t. What happens when a resident doesn’t want a bump-out or trees on his block? There is also the common disconnect between some residents and governing officials. The ambassador program can help address issues of confusion and mistrust, and hopefully enable community action to build from the ground up.

And, of course, there’s the issue with cost. Some homeowners may not even be able to pay their small share of the cost of the Rain Check program. Luckily the city already has programs in place where residents can receive a street or yard tree, rain barrel, and recycle bin–at no cost.

More Soak it up Philly! ribbon-cuttings are scheduled for Thursdays in March and April in different parts of the city, including South Philadelphia, East Germantown, Eastern North Philadelphia, East Falls and Northern Liberties.  Interestingly, these events aren’t centered around anything new; the green projects at these locations have already happened or have been completed for a few years.  The Ambassador and Rain Check programs will be initially concentrated in these ribbon-cutting neighborhoods.