Viaduct Phase I: Design Visions For The SEPTA Spur 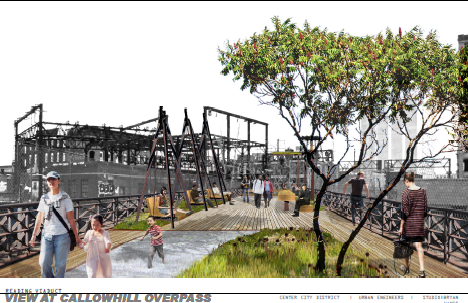 Callowhill neighbors and others have been reviewing design renderings of the first phase of the Reading Viaduct park. For a PDF of the renderings, click HERE. Last year, the Center City District hired landscape architect Bryan Hanes, designer of Logan Circle, Penn Treaty Park, Clark Park, and the new Sister Cities Plaza, to produce designs for a park on the SEPTA spur, the stub railroad that runs east at grade from 13th and Noble Streets into the reading-owned Ninth Street branch (and west as the submerged City Branch).

“We have been working to maintain the industrial character of the space while finding the appropriate balance between program elements and the simple pleasure of being up off the ground in an awe-inspiring place,” noted Hanes.

The Reading Company is presently using (and claiming ownership of) the SEPTA spur for access as it removes the rails and foliage along the Ninth Street branch of the Viaduct.

Negotiations continue between city officials and the Reading Company for control of the Viaduct.