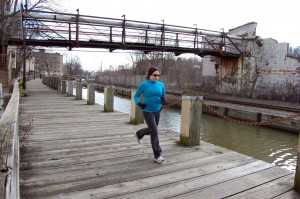 An abandoned pedestrian bridge spanning the Schuylkill Canal collapsed last Monday after being struck by an extra-tall freight car, part of a train serving a paper mill on Venice Island. The spindly steel truss bridge is the same one shown in a January Hidden City Daily article about the completion of renovations to the Manuyunk Canal towpath (click HERE for that article).

Until last week’s accident, two abandoned truss bridges crossed the canal, the trail boardwalk, and the freight track between Cotton Street and Carson Street. The bridge struck by the train is the southernmost of the two. Built to enable Manayunk’s workers to walk to the industries that once filled Venice Island, in recent years the bridge was closed to pedestrians, serving only as a support for utility lines. The destruction of the bridge means the loss of one more intriguing–and visually appealing–remnant of the city’s industrial heritage. 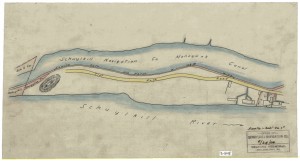 It’s worth noting that the present-day “Towpath Trail” was not constructed on the canal towpath. Standard practice for the Schuylkill Navigation Company was to place the towpath on the river side, i.e. the island side of its canals. The Manayunk Canal towpath was located on Venice Island, its alignment occupied since about 1890 by the railroad track.

Today, a paper mill owned by Paperworks Industries is the last remaining customer on this 1.3 mile long Venice Island branch owned and operated by Northfolk Southern. The line also includes the 19th century iron “Blackie Bridge” crossing the Schuylkill River at Lock Street. Should the paper mill decide it no longer requires freight service, or if the mill should relocate as has been rumored, Norfolk Southern will likely offer the right-of-way and the bridge for sale. Trail advocates see that eventuality as an opportunity to construct a parallel bikeway the length of Venice Island. A parallel bike route here could alleviate potential trail user conflicts: bikes across the canal on the former railroad; dog walkers, strollers and joggers on the boardwalks.