The Street Under The Bank 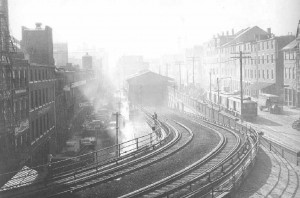 Water Street was laid down alongside Philadelphia’s waterfront in the mid-1690s and perhaps as late as 1705. Early settlers first called it “the street under the bank.” It began as an uneven footpath, then turned into a muddy cartway and finally became a paved—with cobblestones and then Belgian blocks—lane. It was first named King Street, supposedly because goods crossing over it one way or the other had to pay a duty to the king of England.

In the seventeenth and eighteenth centuries, communities founded by the English up and down the Delaware River (and in other places) often had waterside streets named “King” and “Front.” King Street’s name was changed to Water Street about the time of the American Revolution, for understandable reasons. 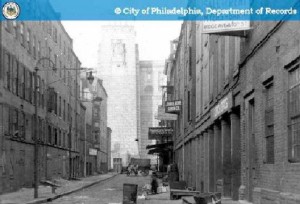 A 1930s view of Water Street looking north at the Philadelphia Anchorage of the Ben Franklin Bridge. I-95 now covers the street in that locale.

Following William Penn’s return to England in 1684, the growing demand for land along the Delaware’s edge–and the correlating opportunity for profit–caused the Commissioners of the Proprietary to issue patents for larger bank lots on the east side of Front Street. Then, in 1690, Samuel Carpenter and neighboring bankers (bank lot owners) presented Penn’s agents with a petition that sought “full and free liberty to build as high as they please above the top of the [bank of the Delaware], which they were not to do by a clause in the said rexive [recited] former Patents.” Penn’s commissioners acquiesced, approving the petition and formulating the “Regulation of the Bank of the River Delaware,” an act executed on April 26, 1690.

The “Regulation of the Bank” instrument formally authorized and established what eventually became Water Street. Bank lot owners were instructed to “regularly leave thirty feet of ground in the clear, for a cartway under and along the said whole Bank,” which was to become “a common and public cartway for all persons by day and by night, forever hereafter.” It was up to the individual landowners to clear the ground, install a hard surface and provide drainage.

The street was the first true incursion on the Delaware River bank. John Watson wrote in his Annals of Philadelphia and Pennsylvania:

I feel vexed and chagrined, while I pen this article, to think for what mere personal purposes fair Philadelphia was so much marred! How mortified and vexed must Penn have felt on his second arrival in 1699, to witness the growing deformity of his city, and to see how far individual interest had swerved his agents from the general good! 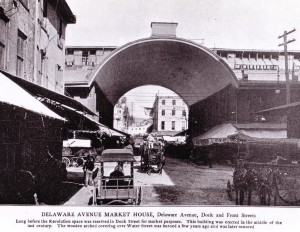 A late 1800s or early 1900s view of the wooden arch cover over Water Street at Dock Street.

William Penn later realized that things had gone amiss and that Carpenter and his fellow bankers had taken advantage of the situation. Penn sent new directives to his Philadelphia agents, including the following in 1703: “I will have no more bank lots disposed of, nor keys [docks] yet made into the river, without my special and fresh leave, for reasons justifiable.” But by then it was too late to correct the problems that had ensued since 1690.

Now, what a busy street the street under the bank was in the 1700s! Watson wrote: “An aged lady, S.N., told me, that in her youth the ladies attended balls held in Water street, now deemed so unfit a place!” It seems that a dancehall was inaugurated in 1748 at a wharf on Water Street between Walnut and Dock. This was the initiation of Philadelphia’s famed Dancing Assembly.

In 1754, Lewis Hallam (the “Father of the American Theater”) and a troupe of London actors performed for two months on Water Street, just north of Lombard. This may have been the first legitimate theater in Philadelphia. The venue was a brick storehouse owned by William Plumsted, mayor of the city from 1750 to 1755. Hallam remodeled the place and called it the New Theater. Resistance by neighboring Quakers shut it down.

The first theatrical company to appear in Philadelphia probably used this Water Street warehouse years earlier, in 1749. The troupe–by the name of Murray & Kean–reportedly staged Joseph Addison’s Cato, although Richard III may also have been performed, maybe for the first time in the New World. Quaker authorities promptly ran this traveling group out of town.

An actual lion was exhibited for a couple weeks at “Abraham Bickly’s new store in Water Street.” This was in September 1727; admission was one shilling. The lion–the first in North America–was exhibited in several cities throughout the 1720s. Bickly (or Bickley) was a member of the Provincial Council of Pennsylvania who lived within walking distance of his storehouse and wharf on Water Street. 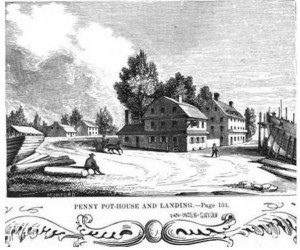 Water Street was a dirty road and its filthiness must have bothered Stephen Girard a great deal. After all, he lived and worked along the lane for much of his life. As we all know, Girard left the City of Philadelphia half a million dollars for enhancing the Delaware’s western edge. His will directed that water pipes, pumps and fire hydrants should be installed along Water Street from Vine to South Streets “to conduct the water through the main streets and the centre alleys to the river Delaware” for the purpose of cleaning the streets and the bank step alleyways. These improvements were most certainly carried out, but it’s unknown if Water Street was ever regularly flushed as Girard had desired.

Almost all of this storied and vibrant street was obliterated in the late 1960s-early 1970s for the construction of Interstate 95. A few blocks of Water Street survive between Summer and Callowhill Streets, along which once stood the famed Penny Pot Tavern. Another segment remains behind Gloria Dei Church, although this was formerly Ostego Street. And a fragment of Water Street exists at the rear of the High Pressure Fire Service building at Race Street.