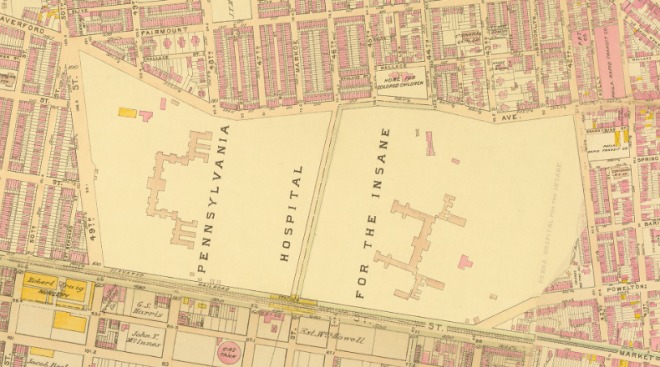 Glance at any map of West Philadelphia and there it is, almost a bull’s eye: the massive, ungridded expanse bounded by 42nd and 49th Streets, Market Street and Haverford Avenue. All this used to be the grounds of the Pennsylvania Hospital for the Insane (later the Institute of Pennsylvania Hospital) and indeed the western section of the site is still used for its original purpose, a “behavioral health services center” inside the old Institute of Pennsylvania Hospital. Over the course of half a century it was subdivided–first into the monumental, state capitol-like Provident Mutual headquarters and then later into Drexel University’s Vidas Athletic Complex, the West Park Towers, some affordable housing flanking 46th, and most recently, a few pad commercial sites.

As the property was subdivided, each new use was inserted as if in a vacuum. No physical connections were made among the uses and no planning was done to guide development. The product has been increased density and even some mixed uses, but following an assiduously suburban model. Gone is the grace of a singular campus, replaced by the worst kind of chock-a-block development. The result is that the original bulkhead form of the sanitarium’s campus endures, disconnected from the fabric of the city around it, impervious, it seems, to time.

Now, $200 million in new development, not including a proposed new police headquarters in the Provident Mutual building, seeks to transform the center of West Philly. Can it finally break down the asylum walls? 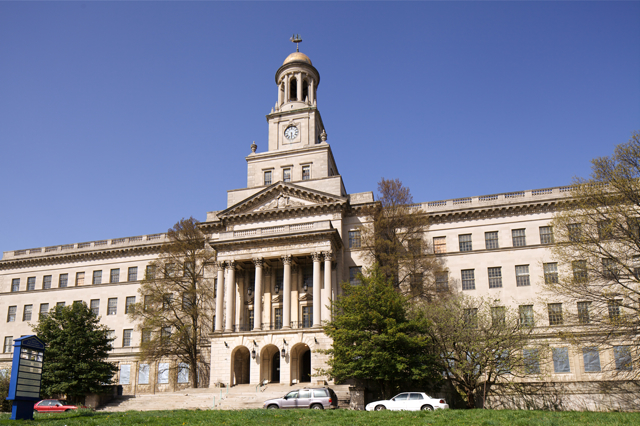 Recently finished is the $66 million West Philly High at 49th and Chestnut; to the east is CHOP’s $30 million, 52,000 square foot Karabots Pediatric Care Center under construction at 48th and Market, and just north is the 166,000 square foot Youth Study Center still under construction at 48th and Haverford, and 18 months behind schedule. East of these is the Provident Mutual building at 46th and Market, which officials hope to turn into police department headquarters.

This burst of new development is welcome in an area that had languished for decades, yet I can’t help but think, “the more things change, the more they stay the same.”

While the site’s density continues to be increased, none of these disparate uses seem to relate to one another, or to the fabric of the city around them. The Karabots entrance is far from the corner of Market and 48th and sits deep behind a wide lawn. The main entrance to West Philly High–as underwhelming a piece of public architecture as one can imagine–is in the middle of the block (so it can face a parking lot). The Youth Study Center, mid-construction as it is, looks somewhat more urban, with a main entrance alongside 48th and actually near Haverford Avenue. But the entire Haverford side is deeply set back. Only time will tell whether a lawn or an (unnecessary) driveway will sit there.

Meanwhile, the one project that promised to yield the kind of transit-oriented-development the rebuilt 46th Street El station deserves remains on the drawing board. The Enterprise Center’s Enterprise Heights, a $75 million mixed-use development first proposed in 2002, has been postponed, scaled down and redesigned.

As much as one would hope for integrated planning here–even at this late stage, design solutions could be found to make a more dynamic, urban place–that’s unlikely to happen. In the course of district planning for the Philadelphia2035 master plan, the expanse itself has been split into two. West of 46th is in the “West” district, east of 46th in “University/Southwest.” Neither district plan is yet underway. 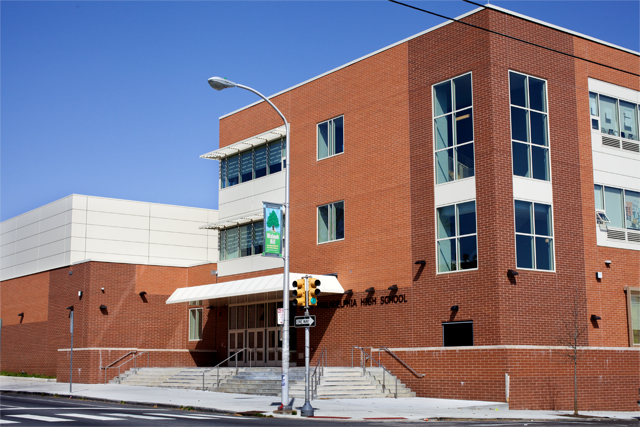