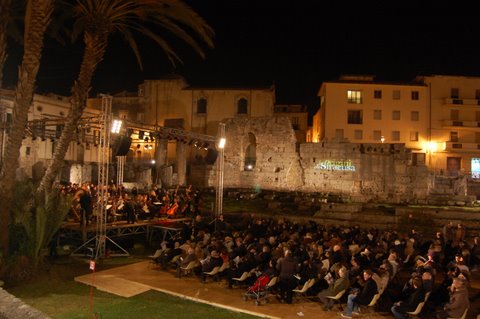 Last Friday night in Siracusa, on the eastern edge of Sicily, where I was on an Arcadia University “preview” trip, the local orchestra performed a concert on the origins of that city, which was founded by Phoenicians in 734 BC. The concert took place on the grounds of the Temple of Apollo, in the heart of the city.

The theme of the course that brought us to Siracusa is global migration. During our visit we spent a lot of time thinking about the imprints of various waves of people, especially Arabs, who over the centuries had colonized the city (streets in Siracusa follow the design of Greek, Roman, Arab, and Norman origins). And yet, we were told, by reflex local tourism officials fall back on marketing the ancient history. Thus the grand concert in celebration of the year 734 BC. 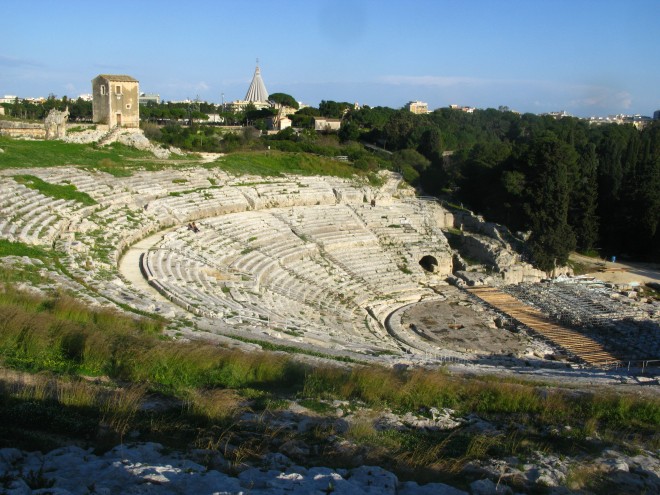 Nevertheless, it was the Arabs who made first Siracusa and then Palermo major cosmopolitan cities. In 1130 AD, after a reconquest, the Arabs moved their capital to Palermo (still Sicily’s capital), and Siracusa has plodded along since, 882 years in the shadows.

Palermo rose up, challenging Cordoba and Cairo for dominance–until Christian reconquest. By 1330, Palermo, once the largest city in Europe, had shrunk some 75% to 50,000. Nowadays, after a surge of growth at the turn of the 20th century (Sicilians who didn’t migrate to New York, Philadelphia, Chicago, or New Orleans apparently went to Palermo), the city has plateaued around 650,000.

All this is to say urban narratives of growth and decline carry across time and space. We therefore need a long view. 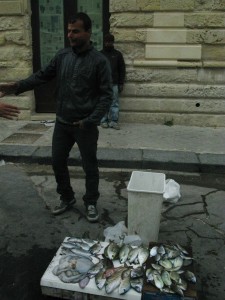 As I noted a couple of weeks ago, Manhattan is some 700,000 people off its peak (over-crowded) population. Indeed, says the libertarian web-site Demographia, “city population losses are the rule.” Paris population is off 25 percent from its 1920s peak. Inner London is off almost 2 million from its turn of the century 4.5 million population.

Most cities grow, says Demographia, by enlarging their boundaries, as Philadelphia did in 1854, and by waves of immigration. Unless we are to annex the suburbs–!–this leaves us one choice. New York City (all five boroughs) has regained its peak population because of massive immigration. If Philadelphia is to continue to grow, even slowly, it will have to be welcoming to global migrants.

Siracusa is not. Most of the immigrants we spoke to were desperate to leave Sicily all together. They aren’t welcomed, integrated, or valued (or given much work). And so the once capital of this parched island clings to its ancient history–clings and yet still imagines future glory.