Of Fairies and Ballet-Girls
Until the 20th century, ballet in America was most often served up as lightweight diversion. The eye-pleasing color and motion of these “incidental dances” relieved the often static staging of serious operas and plays; both the Academy of Music and the Metropolitan Opera maintained a corps of dancers. 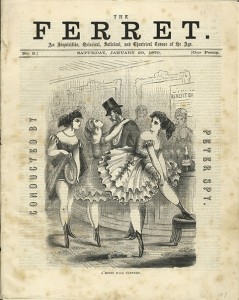 In the complementary world of vaudeville and popular music houses, elaborately costumed dances were usually part of a kaleidoscopic program that might include songs, magic acts, trained dogs, pantomimes and clowns. There were exceptions, like Philadelphia’s own Mary Ann Lee and Augusta Maywood (more on them soon), but the ballet dancer, daring to expose her shapely limbs in “fleshings,” spangles and short skirts, was generally seen as something closer to chorus girl than to ethereal fairy. In short, the “ballet-girl” was something no better than her wicked sister, the actress. The Daily Evening Bulletin described this scene from a ballet presented at the American Theatre in 1867:

The dancers are dressed in an extreme ballet costumes, the majority of them are wearing the shortest possible skirts, with their extemities clothed in flesh colored tights…The dance is perhaps no worse than many others of the same character that are given at other places of amusement, and yet it will scarcely be denied that its chief attraction was its lascivious character, and that the theatre was crowded nightly by men, who came her for the extreme purpose of seeing this dance, and the women who engaged in it. 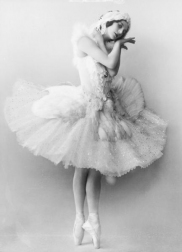 The Immortal Swan
Without a doubt it was Anna Pavlova who did the most to publicize ballet and create new audiences in the early 20th century. It was for the frail-looking Pavlova that Michel Fokine created the solo “The Dying Swan.” In an era before air travel, it was estimated that Pavlova logged over 400,000 miles while touring the globe. She first appeared in Philadelphia with the Russian Imperial Ballet at the Metropolitan Opera House at Broad and Poplar Streets in 1910 to a house nearly filled by a curious public. The Philadelphia Inquirer wrote that “this form of entertainment possesses pleasurable possibilities which had not before been adequately realized in this vicinity…it did prove once more that the dance is entitled to be admitted to the company of the fine arts.”

Indeed, Pavlova was to return to Philadelphia many times in the teens. Her face appeared on Wanamaker Department Store ads and, over eighteen weeks in 1915, The Evening Public Ledger published a series of illustrated articles in which “Pavlowa, peerless dancer” would instruct Ledger readers in her versions of the waltz, the onestep and the polka. The incomparable Pavlova had shrewdly used the mania for ragtime ballroom dancing to promote her company and classical ballet, widening her audiences and her appeal. 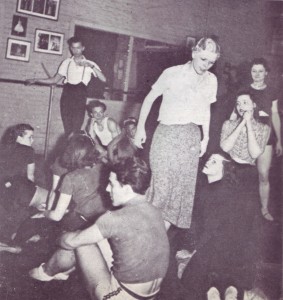 With no fanfare whatever, but considerable promise of success, a new ballet organization has slipped into the American field with Philadelphia at its centre and Catherine Littlefield as its director. Though it came into official existence no longer ago than Oct. 25 with a modest suburban performance, it is already worthy of attention for several reasons. In the first place, it is a healthy step in the direction of breaking down the centralization of all dance activity in New York…In the second place, Miss Littlefield’s procedure is eminently practical, devoid of all pretension and Barnumism, and based on the good old fashioned principal of making haste slowly…At present the repertoire consists of three pieces composed by Miss Littlefield with a very definite end in view. They have been designed to make an appeal to audiences which may never have seen any kind of dance before, and at the same time to be in every way up to the best standards of dance. 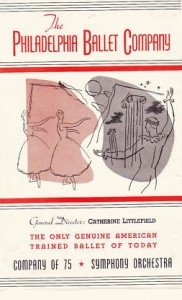 Appealing to a wide audience was just what Littlefield did. The Company performed where they could find an engagement –in high schools, women’s clubs, and athletic associations. The company was fresh, young, and full of enthusiasm. They performed pieces set to classical European music choreographed for them by Littlefield, such as Bolero to music by Ravel, Viennese Waltz to Strauss melodies and a full length Sleeping Beauty. However, they also performed American themed pieces like Barn Dance before Agnes DeMille’s Rodeo and Eugene Loring’s Billy the Kid (see photo, below); The Rising Sun, an historical piece marking the 150th anniversary of the Pennsylvania constitution and Cafe Society, a spoof of the nightclub scene. The company performed to acclaim in New York, and later with the Chicago City Opera. In 1937, Littlefield’s Philadelphia Ballet became the first American company to tour Europe.

In the early 1940s Littlefield lost too many men to the war draft to maintain a performing company–she had always stressed the importance of strong, athletic male dancers. She spent the rest of the decade choreographing ice shows and making significant contributions to musical theater. Littlefield crackled with energy yet was calmly focused; a contemporary commented, “She was dry ice–fiery and cool.”