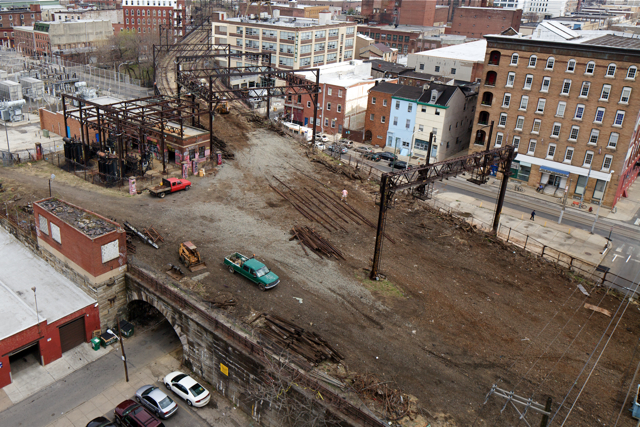 The Reading Company is removing the ties and track and clearing the Reading Viaduct of its spontaneous landscape so cherished by urban explorers and park dreamers.

“While we were shocked at first,” says Reading Viaduct Project organizer Sarah McEneaney, “removing the rails, the ties and clearing the area would cost a lot of money if the city was doing it. The ties are pretty toxic. We do know that the catenarys are staying.”

Park advocates say the rail removal has been long in the works, but possibly expedited because of a planned first phase park on the street-accessible “SEPTA spur.” Reading is using the spur–the only grade connection along the Viaduct–for machinery and labor access to the site. Funding is in place for design of a park on the SEPTA spur; advocates hope construction will begin next year.

“We’re obviously very disappointed and sorry we didn’t organize sooner or more effectively to save the rails,” says Paul Van Meter of ViaductGreene, the group advocating for combining an elevated viaduct park with the submerged rail bed that runs west to the Rodin Museum, for a combined 3 mile linear park.

“It’s particularly disappointing because last Monday in New York, the High Line unveiled its phase 3 plan–to leave rails and keep the naturally-appearing landscape, what we find to be a fiscally responsible approach and what we thought was a valid option for at least some of the Viaduct.”

But Van Meter and McEneaney both concede that most of the rails would have to have been taken up anyway. Van Meter estimates the rails to be worth about $200,000; he is pleased to see they aren’t being melted down, but simply unbolted. Though disposition of the rails is unclear, the hope is that some of them can be acquired and incorporated in park design. Van Meter says it’s also still possible that the rails and the landscape above Spring Garden Street, in the most open and wild section of the Viaduct, can remain.

Meanwhile, with city and SEPTA officials behind them, both groups are gearing up for next steps, including raising project funds. The Reading Viaduct Project has held three community meetings for the SEPTA spur and ViaductGreene continues to sell the idea of a 3 mile linear park. Van Meter says they’d like to do greening projects in the Callowhill neighborhood that will link thematically to the Viaduct above.

“Onward and upward,” he says.