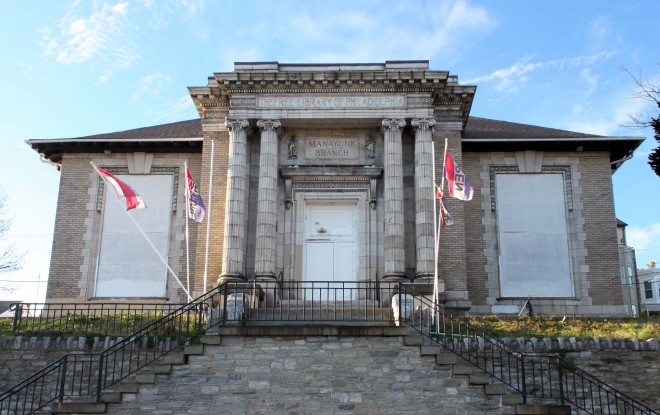 The Manayunk branch of the Philadelphia Free Library as it appears today | Photo: Zachary Lifton

Jim Decker is out on his porch, drinking a beer in the morning sun. He has lived next door to the impressive Manayunk branch of the Philadelphia Free Library since 1980, but these days hardly gives it a second thought. The building sits at the corner of Dupont and Green Streets and was opened in 1909 as one of Philadelphia’s original libraries.

Library-goers at one time hiked up the branch’s steep steps and entered into a vast, T-shaped interior. Sunlight poured into the main reading rooms and touched upon the central circulation desk via skylights overhead. Warm wood paneling, brass light fixtures, and high ceilings gave the Manayunk library an air of dignity and definitive charm. Today, however, the structure sits eerily quiet, unoccupied, and ringed by rubble.

Today the hike up the same stone steps leads to a shuttered door, plywood-covered windows, and a pile of questions. What’s next for the building? Why has it sat empty since 2006? Are there plans for its future?

“I don’t know what’s happening with it now,” Decker laments, “it used to be well-maintained. Now it’s just sitting there. We’re lucky if they mow the grass every now and then: it looks terrible in summer.”

Designed by renowned Philadelphia architect Benjamin Rush Stevens, the Manayunk branch was the tenth building funded by the Andrew Carnegie Library Endowment Program. Between 1886 and 1917 Carnegie vastly improved the state of public libraries across the country by contributing nearly 40 million dollars to erect new buildings. As a leader in establishing a public library system, Philadelphia received one of Carnegie’s largest grants: $1.5 million. From 1905 to 1930 the city’s neighborhoods gained 25 branches under the program–20 of which, like Manayunk’s, still remain standing today.

At present, the building retains almost all of its original exterior character–from the decorative terracotta window surrounds, to the portico flanked by massive ionic columns. Regrettably, the original, 55-pane windows as well as the lavishly appointed interior were lost during the 1960s when the library was decommissioned by the city and the building was sold to a neighboring nursing home.

“It’s kind of funky having that in Manayunk,” says long-time president of the Manayunk Neighborhood Council Kevin Smith, “I mean you’re just in this neighborhood of row-houses and you come across this big, crazy beautiful thing!” 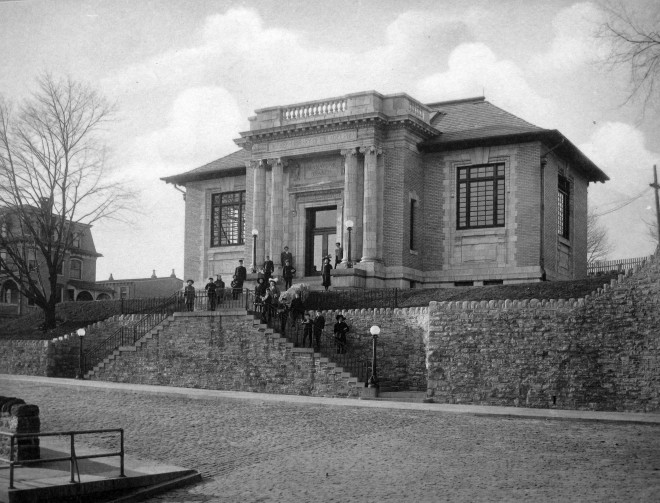 The Manayunk Library around the time of its opening in 1909 | Photo: Philadelphia Free Library

And a crazy, beautiful thing it is indeed. Since its opening the Manayunk branch has been lauded as the most dramatically situated, elaborate, and expensive of the original, Carnegie-era neighborhood branches. And indeed, the gleaming Beaux Arts style building appears in stark contrast to the historically working-class neighborhood fabric, so chock-full of late 19th Century rowhouses. Positioned on a naturally raised lot, the mere two-story structure seems to tower over its neighbors below.

All that has helped prevent the library’s demolition. Smith told me that the present owner, David Perlman, of the Philadelphia Residential Development Corporation, had planned to demolish the library as part of a redevelopment of a neighboring nursing home. “But we said we would fight him to the death on that!” he recalled. A series of community meetings followed, coupled with evolving plans from Mr. Perlman to mitigate concerns about both the historic building and parking issues that new housing would cause.

A final compromise was approved by the Philadelphia Zoning Board January, 2006 preserving the library for use as seven condominiums. According to Perlman, the units will be “high end and contemporary with two bedrooms and two baths each.” He also admits, however, that the financial crisis has caused the project to stagnate for the past six years.

Still, according to Perlman, the library condos are now going through their final permitting process and construction is slated to begin sometime this spring. How the historic building will be altered to accommodate its new tenants is yet to be seen, but hopefully, for Jim Decker’s sake, they’ll at least start mowing the lawn.