Not Your Ordinary Fire Plugs 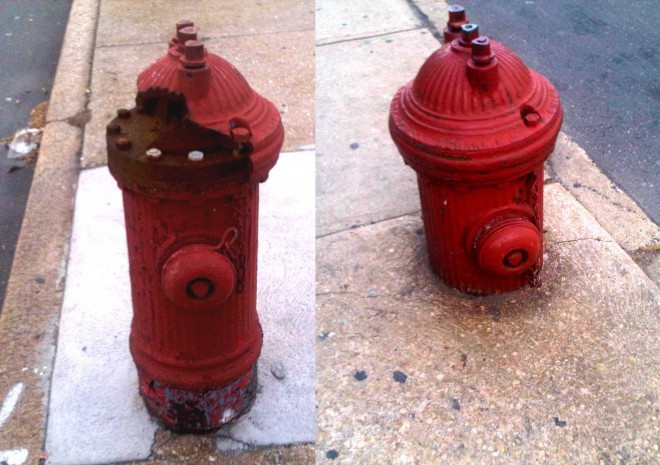 A damaged hydrant at Fourth and Race Streets and a half-buried hydrant.

The city’s High Pressure Fire System was decommissioned in 2005, but its fire hydrants are still with us. These industrial relics are quite common right now, but they won’t be forever. Cars run into them, new projects remove them, and then there are the ones that look like they are sinking. Actually, they’re not–rather, as sidewalks are resurfaced they are sometimes finished at a higher level than before. Perhaps someday they will be buried entirely. In one hundred years, will any one remember that Philadelphia’s HPFS system was acknowledged as finest in the world for decades? Will anyone even know what those red plugs were for? Will any still exist?

The High Pressure Fire System is another Philadelphia “first,” and a much more recent one than most–the system started in 1903. It delivered water via independent mains and special red fire hydrants located on sidewalks throughout downtown. These fire plugs could throw a two-inch stream 230 feet vertically at a moment’s notice.

The first high-pressure pumping station was located on Columbus Boulevard by Race Street, the brick and terracotta building that is to become the Live Arts/Fringe Festival headquarters. Fire losses immediately declined once the HPFS system was operating, prompting the removal of extra insurance charges imposed on structures within the congested area between the Delaware River and Broad Street, from Race to Walnut Streets. 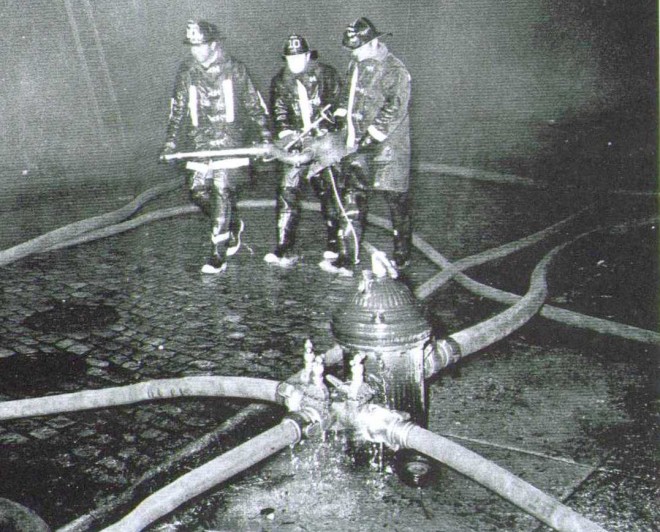 The 56-mile HPFS system was used often and to great success during the 20th century. It was the backbone of the Philadelphia Fire Department and saved many buildings. The system was taken out of commission in 2005 after falling into disrepair. High-pressure water service had become unnecessary anyway due to better fire equipment, high-rise sprinklers, and the use of fire-resistant building materials. 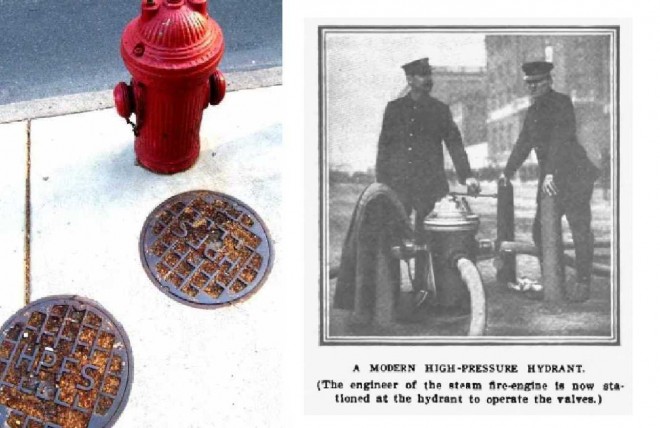 A HPFS hydrant and two manhole covers, and an image of the HPFS system in use when it was new.

A Bit of Backstory

On January 27, 1801, water from the Schuylkill River was introduced from the Fairmount Water Works, distributed by hollow wooden pipes laid in the streets. When a fire occurred, the volunteer firefighters dug down, found a log pipe, and augered a hole through it. Water would fill the firemen’s excavation, forming a “wet well” to either get buckets of water from, or to serve as a pump reservoir. After the fire was out, the hole in the pipe was sealed by driving a wooden plug into it. The plug’s location was noted and marked before the pipe was covered over, so that it could possibly be used another time. This is the basis of the term “fire plug,” a name that is often still applied to modern fire hydrants. 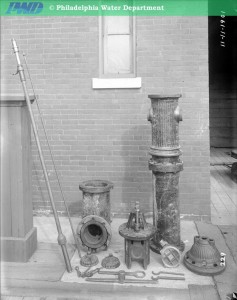 The first “post type” hydrant is generally credited to Frederick Graff, chief engineer of the Water Works, around 1801. It had a combination hose/faucet outlet and was of “wet barrel” design with the valve in the top. As a result, Philadelphia was the first city in the nation to have a fire hydrant system. The following year, Graff introduced an improved version with the valve in the lower portion. These were inserted into wooden mains with a tapering joint. Philadelphia claimed to have 230 wooden hydrant pumps and 185 cast iron fire hydrants in 1811. By 1865, Philadelphia had installed cast iron hydrants that were very similar to those used today.