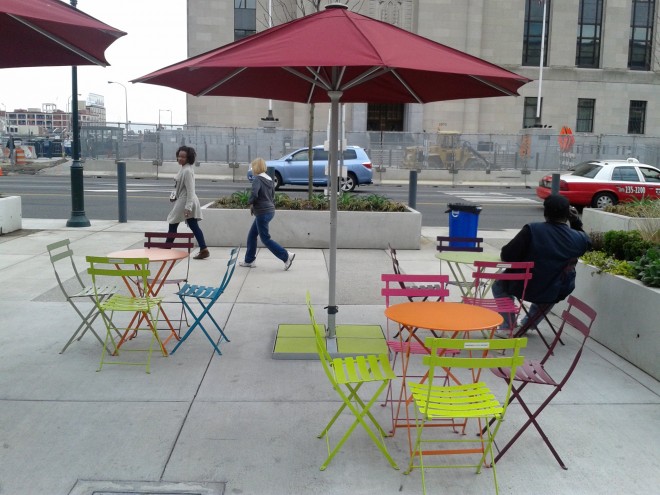 Editor’s Note: Today on the Daily, we debut veteran design writer Caroline Tiger. This winter, Tiger launched The Objectorialist, where she provides a lens on Philly-made or Philly-found designed objects. You’ll find her design-centric observations here, in our section “Found,” every couple of weeks.

Background: This chair, first described in the “Simplex” patent registered in 1889, is made by Fermob, the same French company that makes “the Luxembourg chair“–the green metal, tubular steel stackable chairs scattered around Paris’s Jardin du Luxembourg. 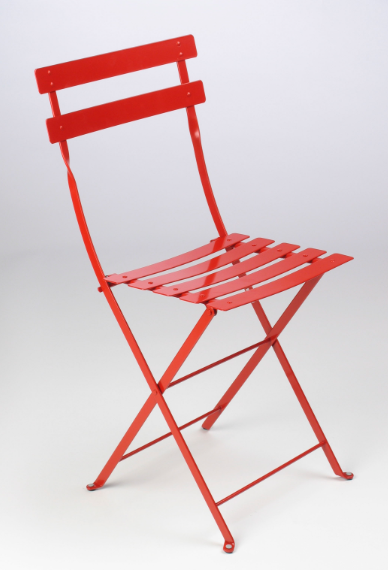 According to Fermob’s website, it was “immediately popular among lemonade sellers of the day, as it was quick and easy to pack away, which allowed them to avoid paying the licence for a permanent bistro terrace.” Kind of like the street vendors in NYC who can roll their wares into a bundle and be off quicker than you can say Dolce & Gabbana.

The history of the folding chair is a less convivial story dating back to ancient Egypt where the seat was associated more with authority and warfare than with whiling away the hours in a bistro or public garden. According to the website design boom, military generals used folding chairs in the field. Folding stools were the status symbols of ancient civilizations. King Tut’s throne was a foldable seat with back support — maybe because designing and manufacturing an articulated chair is a more elite design challenge than attaching four static legs to a seat and seat back.

This is still true. Today’s folding chairs are one category where designers really show their ingenuity. How do they continue to reinvent such a familiar and ancient form? It’s easy to see how this challenge is irresistible. French designer Patrick Jouin’s One Shot Stool, featured at a show of his work last year at the Museum of Art and Design in NYC, is made via 3D printing. A computer scans the design’s cross-section and reproduces it via a rapid prototyping machine (we have a few here in Philly at NextFab), which grows the structure slowly and all in one piece by laying down thousands of layers of a polyamide powder. The Flux chair by a pair of Dutch designers is a sheet of plastic that comes flat-packed and assembles and looks like a life-sized piece of functional origami. 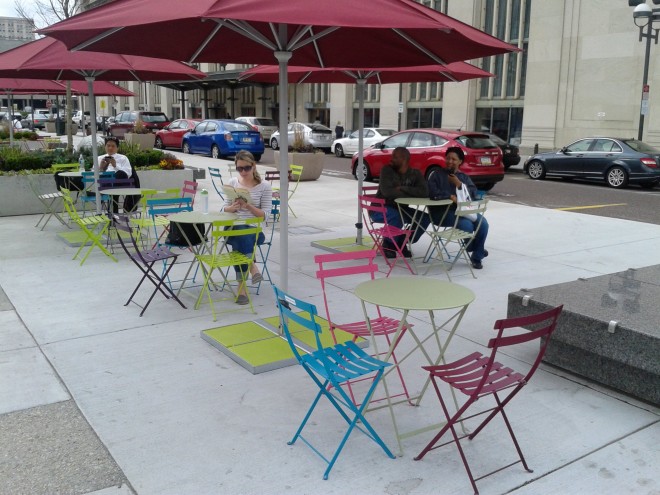 Context: The Porch at 30th Street Station, carved out last year by the University City District on a tiny budget of $300,000 is, as it stands, no Jardin du Luxembourg. That’s an unfair standard to hold any public space to, much less a brand new one, but the UCD invites it by trying to establish a Luxembourgian vibe.

A press release about its 2012 programming, which I coincidentally received as I was writing this post, says, “As the name suggests, UCD sees this new space as Philadelphia’s front porch, a welcoming entryway to the city, as well as a place to linger and socialize, and a place to entertain and be entertained. The Porch serves to balance the indoor grandeur of 30th Street Station with the wonder and expanse of Philadelphia.”

HGTV devotees know that paint color and pillows are the way to punch up a room while decorating on a budget. When it comes to a long, skinny, makeshift public space surrounded on its longest side by crazed traffic, time and money is best spent on furniture and the buffer (wide, substantial tree planters) between said furniture and said traffic.
The sleek, slatted bistro chair is a great choice. It packs a lot into its slim silhouette. Especially in the mix of candy colors scattered around The Porch, the trademark five-slat seat and two-slat backrest telegraph a cool joie de vivre. It carries both vague and specific associations that distract from any discomfort a sitter might feel on a chair that isn’t so comfortable.

This tension makes a lot of sense when you look back to the origins of the word “bistro.” It’s said to have come from the Russian word for “hurry” and from Russian soldiers barking at waiters to serve their food more quickly when they occupied France after the Napoleonic wars.

The design prizes portability and ingenuity. Do you think King Tut and the military generals in the field and the lemonade sellers on the terraces were looking for comfort? They needed to be on alert at all times. They were busy men with little time for lattes and iPads. Think about it.