Look Up, Philly, 1 Or 2 Lessons From Triumphant NY 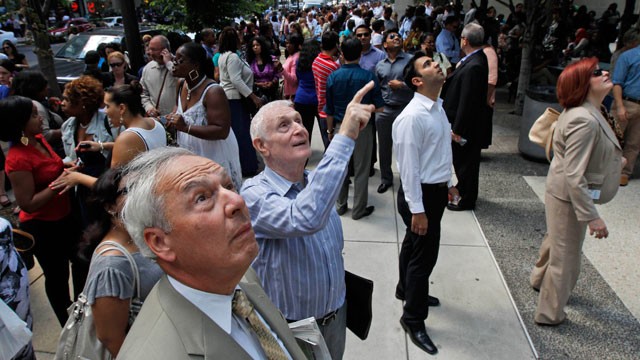 It shouldn't take an earthquake to fill our sidewalks. Look up, Philadelphia | Photo" Alex Brandon, AP

If you find New York triumphalism too much to bear, don’t read this article on Manhattan’s growing population density by Times‘ writer Amy O’Leary.

But if you don’t mind drifting through the smugness–so smug that in an article about Manhattan’s overpopulation, none of the other four boroughs are even mentioned–and bravado, the self-congratulatory tone, the assumption that an infinite number of people wish to be there, the fundamental bravery of those who survive the overcrowded aisles at the Union Square Trader Joe’s or the Broadway sidewalk or the number two train at any time but 3AM–“personal space measured with a micrometer” (clever writing, yo)–then have a look, because there are lessons to be learned.

The 1.6 million people of Manhattan today is still 700,000 below its peak, so why don’t we talk about Manhattan as a city of decline?

Just something to think about. A narrative is what a narrative does, I suppose.

O’Leary in her article goes on to follow the various dreams of the Manhattan-centric dreamers who meet regularly to glee themselves over rosy population forecasts. What to do? Build up, says Harvard’s Ed Glaeser; build out, says Vishaan Chakrabarti, the director of Columbia University’s Center for Urban Real Estate. Truly, why not do both: “New York is the city that reproduces itself according to the ideals of each generation,” writes Jerome Charyn in the wonderful 1986 Metropolis: New York as Myth, Marketplace, and Magical Land.

Well really, every city behaves this way. But this leads me to the second lesson: density matters. Density matters, density matters, density matters. Can’t have great shopping streets, great cultural institutions, great transit, great public spaces without it and we need more of it. We, too, need to build up–along Broad Street north and south, in University City, in Kensington, not every where, not in a way that sacrifices this city’s inherent “livability,” or as Glaeser advocates tearing down the historic fabric (on this we need no help), but in places where there is high demand, excellent transit, and a core shopping district. A city needs its people…and we can turn this narrative around.