Editor’s Note: Theresa Stigale shot the live-work space at 2409 Cedar Street shared by Greg and Kelly Nangle and sat down with Greg to talk about his bronze and glass foundry, where he specializes in “the extraordinary, the unusual, and the seemingly impossible.”

Theresa Stigale:When did you open outcast studios here in Fishtown?
Greg Nangle: In 2007, we bought the building  which was a “retired” and quiet foundry.  We had to rip apart half of the building to free up the space we needed for our equipment.  Luckily, it already had a bridge crane, fork lift and and sand molding tools, flasks, and jib cranes. 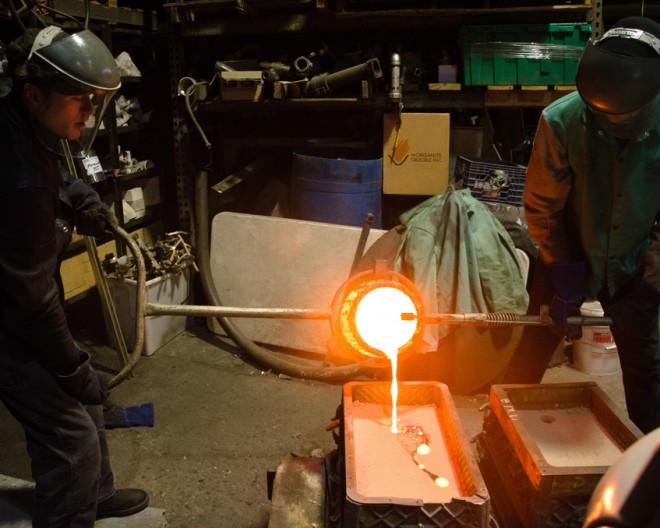 TS: How did you end up starting your own operation?
GN: Outcast studios began shortly after 9/11 when I couldn’t bear the thought of returning to the miserable job I had at a local foundry, dealing with a commute, or generally interacting with society at large. I had one customer and started making waxes in my kitchen at night. Over time I picked up an odd job here and there and worked like a lunatic night and day – I still do, except I have a dedicated wax room now! 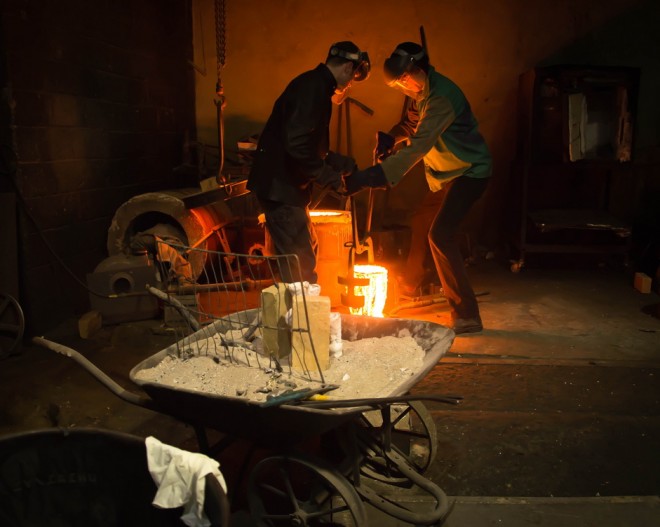 TS: What materials do you work with in the studio?
GN: We do glass, bronze and aluminum casting in ceramic shell and resin bonded sand and  all types of fabrication, resin projects, mold making and copper forming. 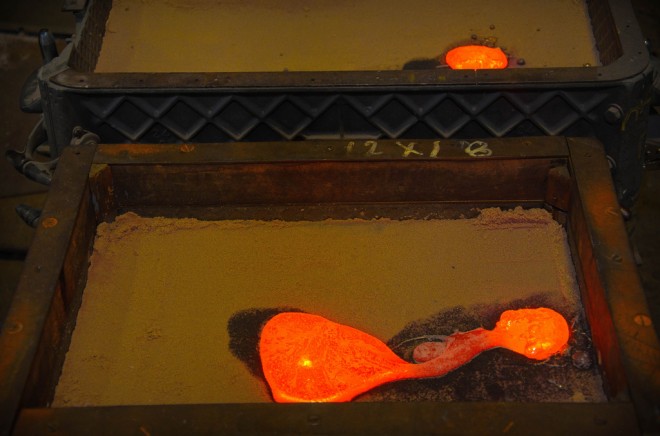 TS: How do you find your customers?
GN: We literally get jobs from all over the world but they all have one thing in common—basically we get all the jobs that no one else wants—the impossible, annoying or unreasonable. I believe that anything is possible and I love the challenge of making something that no one else is willing or able to make. I have no idea how they actually find us—it must be word of mouth and referrals. 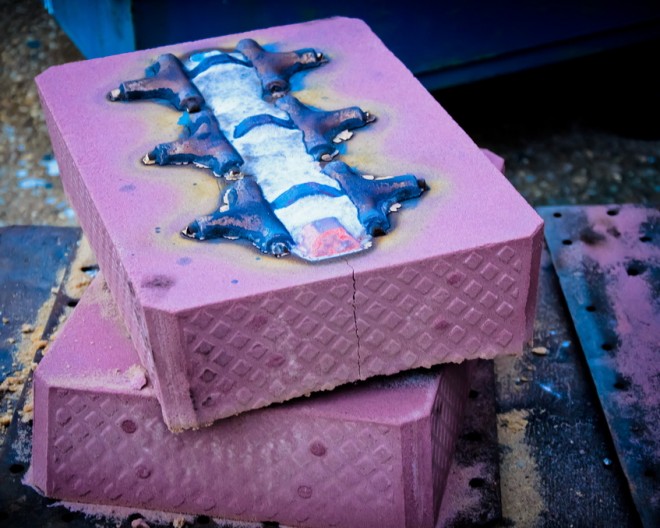 TS:What is a typical studio project?
GN: We just finished fabricating an eight foot diameter spherical polyhedron aluminum sculpture for an artist in NY who projects light on to sculptures as art installations.  Of course, like most of our projects, it had a finite budget (laughable) and there was a really short deadline.  We were able to fabricate and ship the piece to an art fair in Shanghai in three weeks. 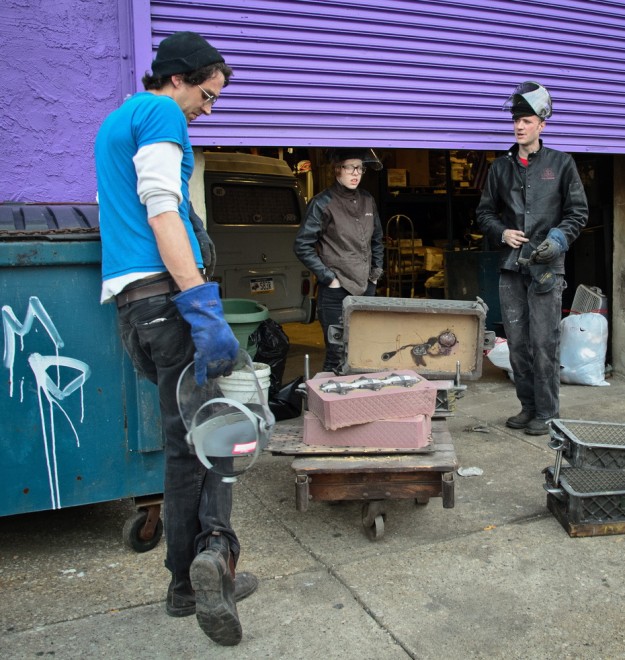 TS: That’s unusual, you actually fabricate art and ship it TO China, instead of the other way around?
GN: Yep–that’s something that I am pretty proud of –that I can take some of the fabrication jobs from overseas and make sculptures and products here. We also do a lot of work for Anthropologie, like making glass and metal fixtures.  They would rather hire a local foundry like us than contract and ship from overseas. 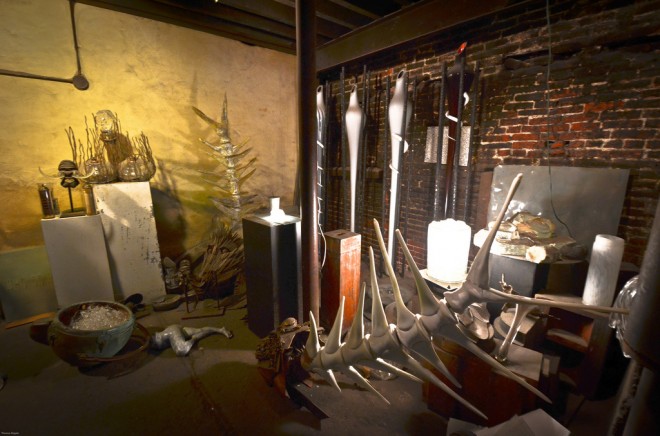 TS: What ‘s the deal with your castings for H.R. Giger? Isn’t he the artist who created the creatures in the movie “Alien”?
GN: Yes he was–this is one of our favorite ongoing projects. We met his U.S. agent, Les Barany from New York, through Alex Generalis, a local Philadelphia sculptor. We are casting some bronze and aluminum sculptures for Giger. We also travelled with Les to Switzerland to vist and work with Giger at his home and at the Giger Museum located in a castle in Gruyeres. 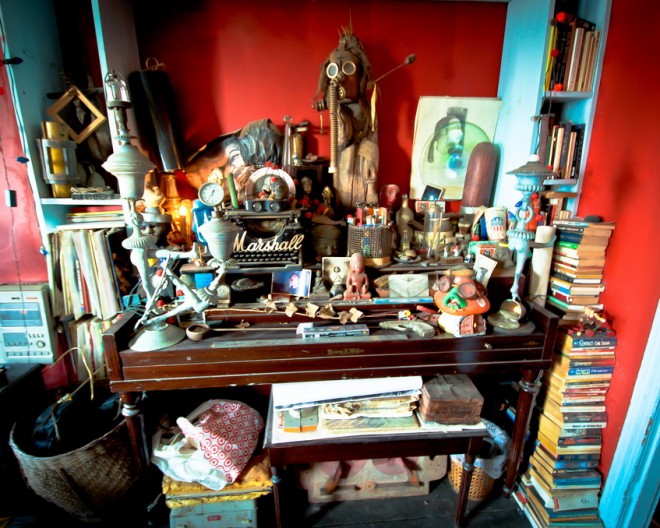 TS: Who were some of the people who influenced you to become an artist?
GN: My Dad for one.  He was a Fishtowner who saw fit to hang a copy of “The Garden of Earthly Delights” by  Hieronymous Bosch on my bedroom wall when I was a child-it stayed there until I was about 12, then he gave me a copy of Ulysses to read.  I am a surrealist and it probably started with that painting.  So many other artists influenced me and some were my teachers–my mentor, Mark Ferguson, who passed away too young a few years ago—  taught me how to work with glass. Basically everyone who I came in contact with who impressed me with their work were my influences. They had one thing in common–they all cared about me doing well and I cared about them. 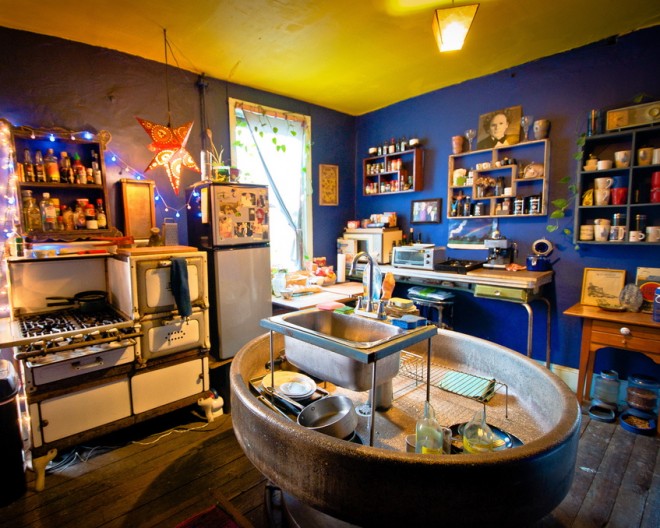 TS: What experiences have you had that helped to develop your own body of work?
GN: I would defintely say the graffiti movement here in Philly.  That was a huge part of my artisitc development at a certain point. I was a graffiti artist in Philly from about the mid-80’s to the early 90’s, although I wouldn’t tell you where to find my work today, if it even exists anymore.

I liked the idea of people seeing my ideas. The early experiences I had being taught to draw by my great uncle who worked on the Apollo program as well as other NASA programs as a draftsman and technical illustrator.  Being shot at, electrocuted, beat up, institutionalized, pigeonholed and discouraged helped too! In art, your failures are your biggest accomplishments. 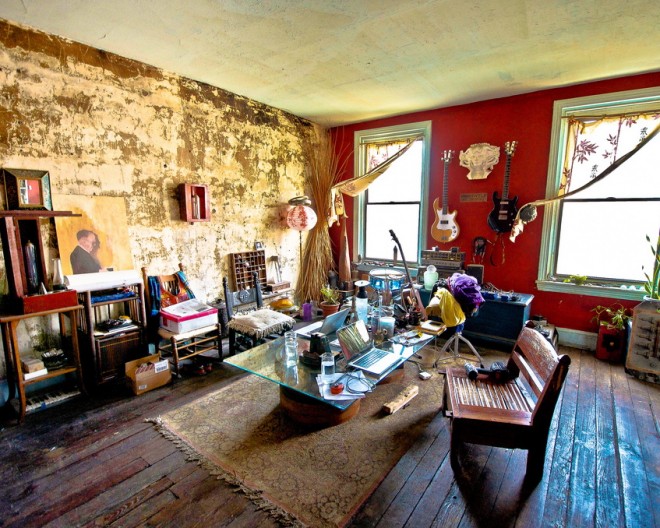 TS: In addition to fabrications for clients, you create your own art in glass and bronze.  Where can we see some of your your work around Philly?
GN: I have two public sculptures close by: I designed and fabricated  the steel U-Lock sculpture on  Frankford Avenue in Fishtown, and created an installation of cast bronze hands at the Piazza at Schmidt’s in Northern Liberties. In West Philly I have a bronze sculpture outside the University City Arts League, and my work is on display at the Marigold Kitchen restaurant. 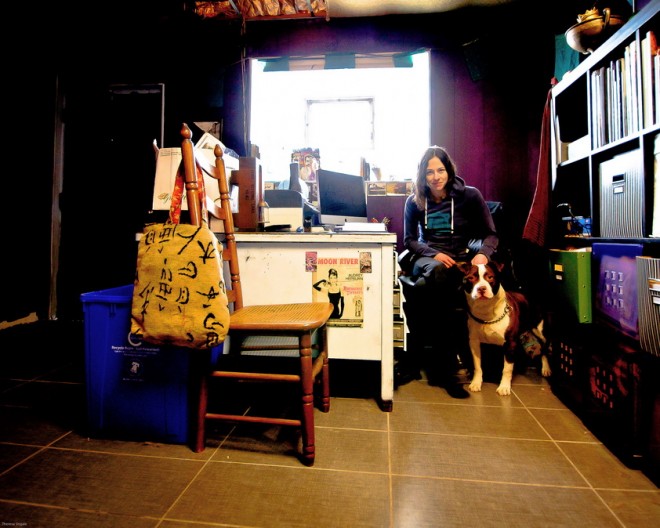 TS: How did the neighbors react when you moved in and brought the foundry back to life?
GN: They have all been really great–although maybe in the beginning a little mystified by our strange plumage and bizarre behavior? We just painted the outside purple and baby blue. 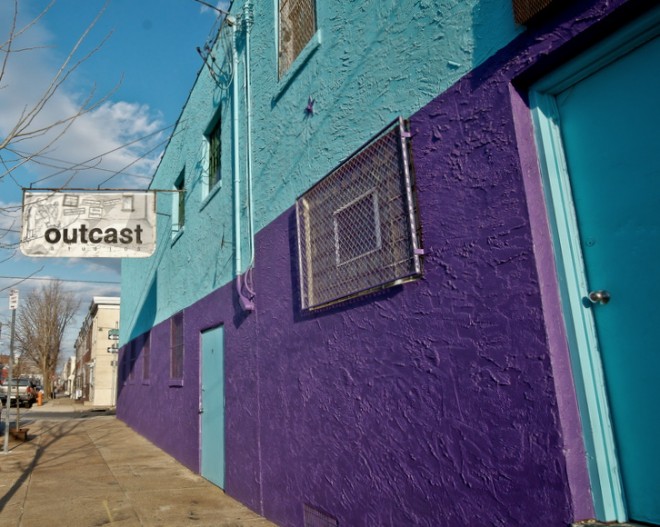