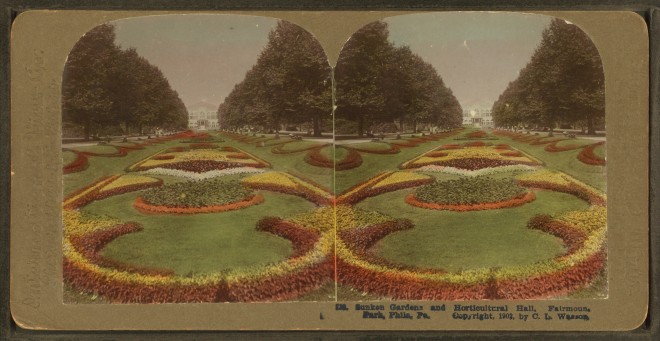 Editor’s Note: Today we quite literally step into Philadelphia’s lost landscape with a debut column by veteran garden and horticulture writer Nicole Juday.

“There’s a turtle made out of rocks. I’ll show you–you won’t believe it,” said Terry Zito, head gardener at Shofuso, the Japanese House in West Fairmount Park. Zito was leading me down into Lansdowne Glen, a wild ravine separating the manicured landscapes of Memorial Hall and the Horticultural Center. The little stream at the bottom of Lansdowne Glen once emptied into the Schuylkill River, but these days it’s amputated by the Schuylkill Expressway.

The area around the Horticultural Center is the kind of landscape that leaves me feeling slightly off-kilter, as if the original purpose and intention have gotten lost with the passage of time. An anachronistic combination of grandeur and austerity, it’s a space that seems to have been designed for Something Big, yet walking through it gives one the sense of being alone in a museum after hours. Only the frantic hum of the nearby Schuylkill Expressway breaks the silence.

Then she pointed. “That’s the burial ground, right where the expressway is.” During my research into this part of Fairmount Park’s history, I had heard several hushed references to a Lenni Lenape burial ground that was unearthed (and allegedly covered up, literally and metaphorically) at Lansdowne Glen during the construction of the Schuylkill Expressway. 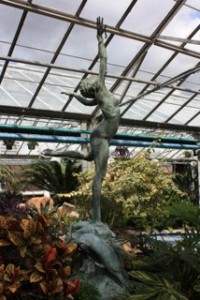 She showed me how the large rock formation, half covered in leaf duff and forest debris, resembled a turtle, a sacred Lenape symbol. I wouldn’t have realized what it was it without her help, but there it was: head, legs, shell, and a long tail. We stood on the head and she removed her phone from her fanny pack. “I bought a compass app just for this.” Aligning the compass direction with the axis of the turtle’s body, it pointed due north, exactly.

Probably not everyone is going to see the sacred symbol in this pile of boulders. But whether or not you believe in the turtle, what’s undeniable is that the history of our region is always much deeper than it appears.

The Horticultural Center itself is a 31,000 square foot series of greenhouses, home to a variety of tropical plants as well as some statuary, ornamental pools, and a small visitors’ center. The ferns, palms, giant houseplants, and succulents are mostly arranged around the perimeter, leaving the interiors open; it’s a popular location for weddings and other events. Owned by the city and managed by the merged Fairmount Park Commission and Parks and Recreation Department, the Horticultural Center is open to the public during the day, and it’s free to go in and walk around.

Outside one of the entrances, a reflecting pool stretches out for hundreds of feet. And beyond that is the 27-acre Centennial Arboretum, an expanse of mowed parkland, dotted with specimen trees. Like the lines a figure skater leaves on the ice, a drive loops and curves all around the level landscape. The invisible presence of course is the Schuylkill River, which is cut off by I-76 just below the plateau of the park. 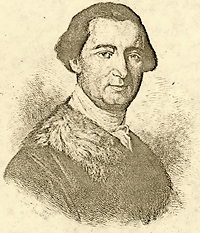 The documented European history of this landscape goes back a little before 1777 when Governor John Penn, grandson of William, purchased the land and created a 200-acre estate of sufficient magnitude to befit his status and wealth. Called Lansdowne, the mansion was one of the early examples of a Philadelphia mansion built “in the Italian style.”

The house was approached by a quarter mile drive, shaded along its length by magnificent trees left standing when the virgin forest was felled. As at other riverfront estates, Lansdowne was surrounded by formal gardens filled with busts and statuary. But the house was most famous for its unobstructed views of a series of ravines and valleys that tumbled into the Schuylkill River.

These oft described romantic dells and sylvan glades were generally considered to be the most beautiful natural landscape feature in 18th century Philadelphia. There were three of them, and they were named for the estates they graced: the Belmont, the Lansdowne, and the Sweet Briar. They all still exist, and can be seen from I-76 around the Montgomery Avenue exit. Their value as assets to the landscape, along with their names, has been long forgotten.

John Penn lived at Lansdowne on and off until his death in 1795. The house then had a series of inhabitants, including the peripatetic Joseph Bonaparte, brother of Napoleon, before it caught fire on July 4, 1854, the result of fireworks being set off on the great porch.

A map from 1862 shows a grid of unnamed streets laid out over the area of Lansdowne, but the expansion of the city in this direction was never carried out. In 1865, the City of Philadelphia acquired Lansdowne as part of its plan to expand Fairmount Park, which at that point included only the Water Works, and the estates Lemon Hill and Sedgely, all on the east side of the river. The invention of the microscope had made incontrovertible why so many Philadelphians were being sickened with cholera and typhoid fever. The city’s drinking water was filthy and highly contaminated with bacteria. Controlling the waterfront was seen as a public health measure to prevent the emptying of waste into the city’s drinking water supply.

The park grew quickly, swallowing a number of the 18th century estates on the west side of the Schuylkill River, including Belmont, Sweet Briar, and Solitude. 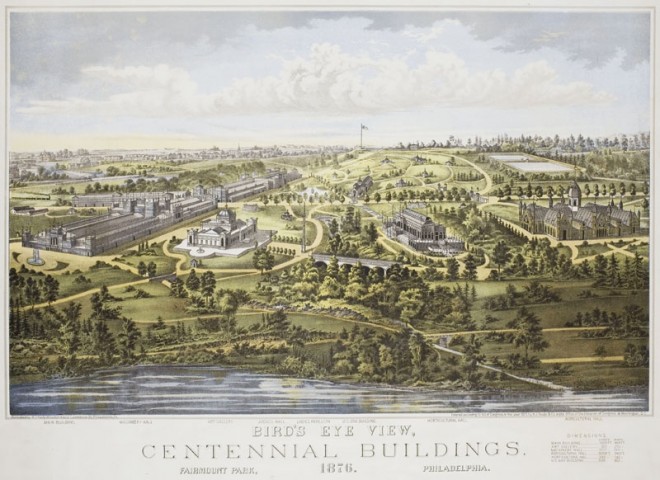 In the 1870s, 465 acres of parkland, including what had been the Lansdowne estate, were appropriated for the Centennial Exposition, America’s first world’s fair. West Fairmount Park was chosen because of its elevation, its proximity to rail lines, its unlimited water supply, and its easy access to the city. 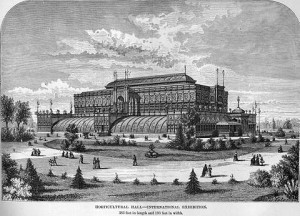 Of the 200 elaborate buildings that were built, including the main exhibition hall–the largest building in the world–only a few were intended to be permanent. One of these was Horticultural Hall, located on the exact site of the old Lansdowne House. A monumental building, the view from the second level of the Hall was of those picturesque ravines overlooking the Schuylkill. The Hall was filled with extraordinary plants from around the world, and these were complemented by a number of elaborate gardens installed throughout the grounds nearby.

Many of these gardens survived into the 20th century, some of them into the 1950s, before being demolished. The long reflecting pool outside the side entrance to the Horticultural Center was created by filling in one of the Centennial sunken gardens, which, according to the official Centennial guide book, had been “planted to illustrate the different methods of ornamental flower gardening.” 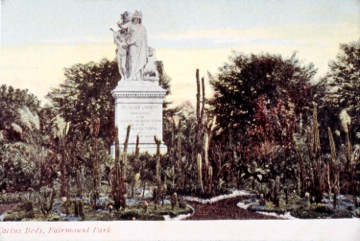 Horticulture Hall continued to operate throughout the depression and the world wars, each of these events taking a toll on the ability to keep up the old structure and its living collections. The death blow to the Hall came in the form of Hurricane Hazel in 1954. It was the second time a building on the same site had been suddenly destroyed.

The current Horticulture Center and third structure on the site was built in 1976 to commemorate the Bicentennial celebration in Philadelphia. It is a practical building, quite unlike the confection of glass and iron of its predecessor, which had been designed in the style of 12th century Moorish architecture. Inside the greenhouses are a few objects from the original Horticultural Hall, including an ornate marble fountain and two beautiful bronze Ibis statues. There are some charming demonstration gardens nearby, but nothing survives remotely on the scale of the Centennial plantings. 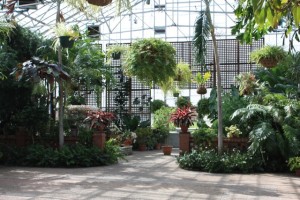 Behind the Horticultural Center are some faint paths that still lead down to Lansdowne Glen. Native wildflowers like May apples and trout lilies emerge in the spring along with the invasive plants that have colonized the sloped ravine. A stream still flows at the bottom of the glen, and Terry Zito goes down there sometimes with a shovel to keep it from clogging up. Out of respect, she picks up the trash that gathers down there too.

Maybe it’s possible that certain places can possess the power to resonate with many people over a long time period–even across cultures. The accruing layers of human intervention can make these places harder and harder to find and more difficult to appreciate, but standing in the right place, it’s sometimes still possible to get a hint of what made certain places special. At least that’s how I felt standing there, on what was either a large pile of rocks in a swampy, vine-covered ravine next to a major highway, or a highly valued and greatly admired natural setting, appreciated by millions of people over thousands of years.